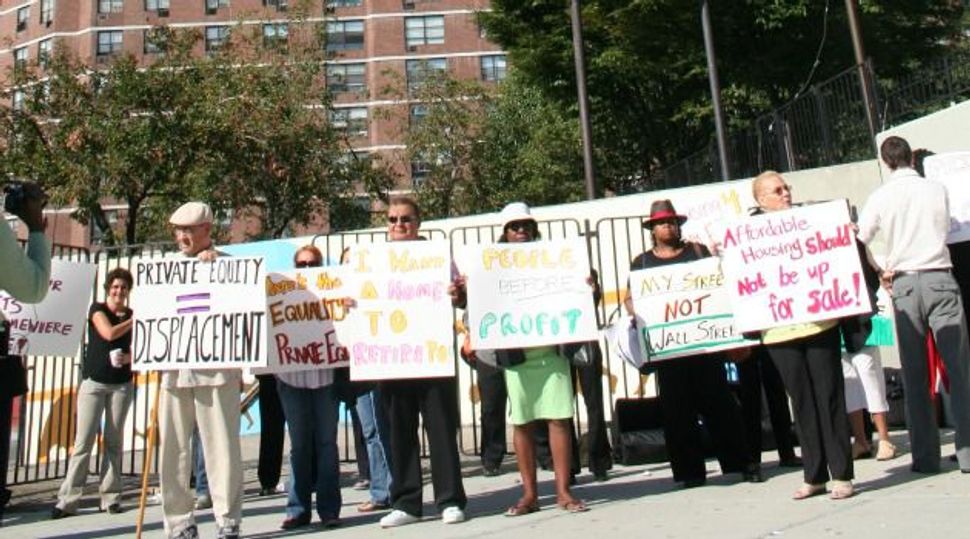 I am a Jewish tenant organizer. This is not so unusual. Jews have been organizing ourselves and others since we left the Old World for New York City’s slums. We created labor unions when we lived in tenements on the Lower East Side, and we continue to organize today, often in partnership with other communities, around fair food, just immigration policies, domestic workers’ rights and countless other issues.

These days, however, being a Jewish tenant organizer sometimes means organizing against other Jews. In my role at the Urban Homesteading Assistance Board, in New York City, I often encounter Jewish slumlords dressed in Orthodox garb with tall hats and sidelocks.

I work in several buildings in the Bronx and Brooklyn where the tenants are almost exclusively low-income people of color. When I see a religious Jew outside a building I’m working in, I often assume that he is the owner or that he works for management, and I wait around and try to talk to him. I don’t like to make these assumptions, but then again, I’m usually right.

I work in buildings that are in foreclosure and swept up in the cycle of predatory equity. Developers pay enormous sums for low-income rent-regulated housing, hoping they can turn a profit. Often, either the new landlords harass tenants into leaving or they buy them out so that they can raise the rent.

But for a variety of reasons, in recent years some developers haven’t been able to transform the buildings as quickly as they anticipated. These predatory landlords eventually have trouble paying their massive mortgages, and so they skimp on repairs and maintenance, creating unlivable conditions for the existing tenants. All too often, these buildings fall into foreclosure, only to be purchased by a new developer who will continue this cycle.

UHAB watches this happen over and over again in buildings all over the city, particularly in areas that are targeted for gentrification. We view foreclosure in these distressed buildings as an opportunity for tenants to organize and to have a say in who buys their building next. Ideally the new owner will be responsible, make the much-needed repairs and commit to maintaining the building’s affordability for current tenants.

As tenants go through the process of foreclosure and organizing, they are suspicious of the men in suits who come to scope out their buildings. These speculators are often looking to purchase the building to turn a profit, and have no interest in becoming responsible, long-term landlords.

I hear a lot of anti-Semitic comments from tenants based on their experiences with landlords, the only visibly Jewish people with whom they have contact. (I was raised in the Reconstructionist movement, and I’m not visibly Jewish.) Sometimes I get a call from a tenant who tells me “a Jew is in the building,” presumably meaning that a speculator has come around in hopes of purchasing it.

Tenants complain to me that Jews don’t work on Saturdays, so it’s difficult to get in touch with their landlords. One time, when an Orthodox Jew bought a building in the Bronx, the tenants were convinced that he worked for the same company as the previous owner, also an Orthodox Jew. They had a difficult time trusting him.

Recently I began working in a different building in the Bronx with another Orthodox Jewish landlord — or at least I think he is the landlord. He works for one of those slippery limited liability companies where it’s difficult to tell who owns the building and who works for the owner.

The building is extremely distressed; in 2012 it was ranked by a city agency as one of the 200 worst buildings in New York City. The heat and hot water are completely unpredictable; some units are ravaged with mold, and there is a major rat infestation.

Two months ago, the tenants and UHAB invited the landlord to a meeting so that they could find out about his plans to improve the poor conditions in the building.

The meeting was tense: There were still major problems with heat and hot water, and because the landlord had not hired a Spanish speaker for his office, many tenants couldn’t communicate with management. At the meeting, the landlord declined to shake hands with several women. One of those women, an 80-year-old tenant leader named Antonia, turned to me and rolled her eyes. I uncomfortably whispered to her that he’s a religious Jew who can’t touch women he’s not related to. But I’m not sure my explanation made her feel any better.

During that meeting, the landlord refused to pick a date by which he could commit to finishing repairs. Hanukkah was coming up, and he said he would be unable to work that week. While I respected his observance of the holiday during the evenings, I blurted out: “You can work during the day, though! Hanukkah is not yom tov [a holiday on which work is prohibited]!” This seemed to catch him off-guard. “Yes,” he stammered. “I’ll see what I can do.”

I began tenant organizing during my year in Avodah: The Jewish Service Corps. I’m hardly the only Jew on the renters’ side in New York City. Half the organizers I know are Jewish, and many of the attorneys representing our tenant associations in courts are, too. Some of the tenants I work with are also observant Jews. But by and large, the tenants continue to associate their negative experiences with Jews because their landlords are the only visibly Jewish people they know.

So what’s the solution to ending this brewing anti-Semitism in New York City’s worst buildings? The obvious answer is ending bad landlord practices in Orthodox Jewish communities. But of course that’s way beyond my control. What is within my control is when or how I can “out” myself as Jewish to the tenants I work with. Often, I let tenants know as soon as possible, particularly when working in a building that has had many Jewish landlords. The tenants and I end up chatting about holidays, kashrut or other tidbits of Judaism.

Organizing is about building strong relationships, and when tenants learn that I am Jewish, I hope that they develop a more nuanced understanding of how a Jewish person might look or behave. And whose side a Jewish person can be on.

Elise Goldin is a tenant organizer with the Urban Homesteading Assistance Board. She co-runs and contributes to The SurRealEstate, a blog about housing, politics and organizing in New York City.