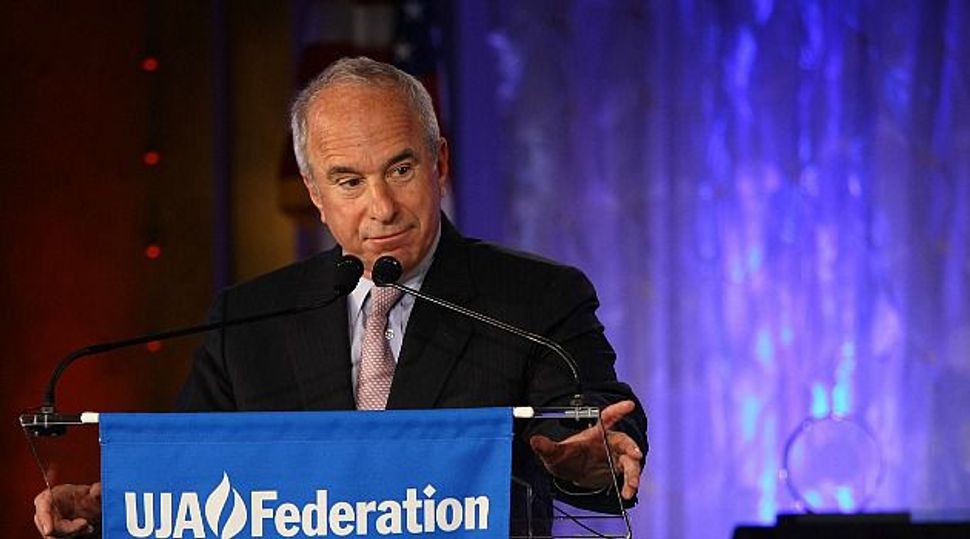 Long Tenure: John Ruskay will leave the helm of UJA-Federation of New York next year after 15 years. Image by getty images

John Ruskay will resign as head of the UJA-Federation of New York in mid-2014, leaving a position he has held since 1999.

UJA-Federation, which calls itself the largest Jewish philanthropic organization in the world, had revenue of $234 million in 2011. The organization said that it had raised $2.7 billion over the course of Ruskay’s tenure.

Despite the 2008 economic collapse, UJA-Federation’s endowment has grown dramatically under Ruskay’s leadership. Yet questions about the Jewish communal umbrella group’s future linger amidst findings from the UJA’s own surveys that show New York’s Jewish population changing dramatically.

“If you read the Forward in the ‘90s, they were counting the Federations out,” Ruskay said. “Jews have always wanted an entity that comes together to say we’re going to take care of the Jewish community and the Jewish people wherever they are.”

Ruskay will be nearly 68 years old when he steps down as CEO. He said that the organization has already hired a search firm to find his replacement. He plans to spend time with family, and to work on projects related to Israel education.

Prior to arriving at UJA-Federation in 1993, Ruskay earned a doctorate in political science at Columbia University. He was an activist with Breira, a short-lived left-wing Jewish group formed in the aftermath of the Yom Kippur war to advocate for mutual recognition between Israelis and Palestinians.

“This has been a fabulous, wonderful professional journey,” Ruskay said. “It’s also time to move on a little bit, to create some room for others.”

Among his proudest achievements at Federation, Ruskay cited the organization’s response to the economic crisis in 2008 and to Hurricane Sandy.

“New York is a thriving Jewish community,” Ruskay said. “So many institutions are vibrant and thriving…. [W]e’ve had a role in seeding and supporting some of that renewal and vitality.”