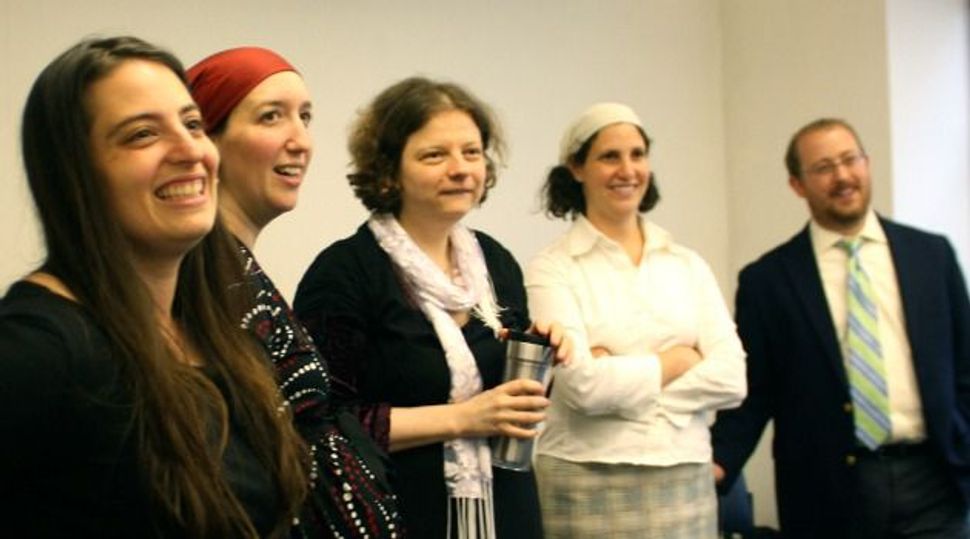 Mixed Welcome: The first women graduates of an Orthodox rabbinic school are being welcomed with open arms ? by some. Image by courtesy of yeshivat maharat

An Orthodox umbrella organization has rejected the ordination of three female clergy by a groundbreaking Bronx Orthodox rabbinical school as “contradicting the norms of our community.”

The Rabbinical Council of America, a prominent group that serves more than 1,000 Orthodox rabbis, reacted strongly to the recent graduation of three women from Riverdale’s Yeshivat Maharat, which trains Orthodox Jewish women to become spiritual leaders.

In a statement released May 7, the RCA said it views the graduation as a violation of mesorah, or tradition.

“We feel extremely strongly that there is certainly room for women leadership within the Orthodox community, both educationally and professionally,” RCA President Rabbi Shmuel Goldin told the Forward. “We do not believe, however, that it is appropriate for women to be ordained as rabbis.”

Sara Hurwitz, dean of Yeshivat Maharat, hit back at the RCA, calling the inaugural graduation “an extraordinary moment of celebration.”

“Our graduates have been rigorously trained and tested, and will be ordained as clergy, qualifying them as decisors of Jewish law and spiritual leaders,” Hurwitz told the Forward.

Ruth Balinsky Friedman, Rachel Kohl Finegold and Abby Brown Scheier are scheduled to be ordained June 16 at a ceremony in New York. Finegold was recently named director of education and spiritual enrichment at Congregation Shaar Hashomayim, an Orthodox synagogue in Montreal.

The graduates are conferred with the title of maharat, short for Manhiga Hilchatit Ruchanit Toranit, which means leader in Jewish law, spirituality and Torah. They are not called “rabbi,” in an apparent nod to Orthodox tradition, which is usually interpreted as barring women rabbis.

The graduation marks a significant milestone for Yeshivat Maharat, which began accepting applications in 2009. There are currently 14 students in the four-year program, which, according to the yeshiva’s website, includes rigorous study of Talmud, halachic decision making, pastoral counseling, leadership development and internships.

The school has also been controversial from the start. In April 2010, the RCA passed a resolution claiming the council “encourages “a diversity of halachically and communally appropriate professional opportunities for learned, committed women.” But, citing “sacred continuity,” the group rejected the ordination of women.

The RCA said that they “cannot accept either the ordination of women or the recognition of women as members of the Orthodox rabbinate, regardless of the title,” it said.

Despite the dispute, the newly minted spiritual leaders are finding warm welcomes at their new synagogues and among some circles of Modern Orthodoxy.

Congregation Shaar Hashomayim’s Rabbi Adam Scheier and President Joseph Paperman welcomed Finegold to the synagogue: “Rachel’s appointment breaks exciting new ground for our congregation,” they told The Canadian Jewish News. “It is consistent with the evolution of Modern Orthodoxy.”

Rabbi Shmuel Herzfeld of Ohev Sholom said he is excited at the prospect of bringing in Friedman.

“I feel there’s too much at stake for our people to not utilize 100% of the population to reach and teach and guide as much of the Jewish population as possible, especially in the community I live in,” he said. “We need a female presence in our mission in trying to reach as many Jews as possible.”

He also rejected the RCA’s objections to women serving as spiritual leaders.

“Every single thing that she’s going to be doing in our shul is 100% in accordance with Orthodox interpretation of Halacha,” Herzfeld said.

Friedman is currently a congregational intern at the Hebrew Institute of Riverdale, where she works with Avi Weiss, senior rabbi and the founder of Yeshivat Maharat.

In January 2010, Weiss conferred the title of rabba on Hurwitz and made her a full member of his rabbinic staff at the Hebrew Institute.

Shortly after, Agudath Israel of America and the RCA strongly criticized the action. Weiss, an RCA member, announced in March 2010 that he would not name female graduates at Yeshivat Maharat as rabbas, a move that some at the time viewed as a response to pressures from the RCA.

Finegold has said that she will go by the title of maharat at Shaar Hashomayim.

Rabbi Asher Lopatin, leader of Chicago’s Anshe Sholom B’nai Israel, where Finegold is currently the education and ritual director, told the Forward that the ordination of women is long overdue.

“Nothing Yeshivat Maharat is doing is a break from the mesorah,” Lopatin said. “Women in roles of communal and religious leadership has been a long tradition — just ask any rebbetzin. But Yeshivat Maharat will now professionalize and formalize the role in a way necessary for today’s Orthodox Jewish world.”

“All Jews, Orthodox or otherwise, should welcome the Torah these women will teach and the Yiddishkeit they will instill in the communities they serve.”