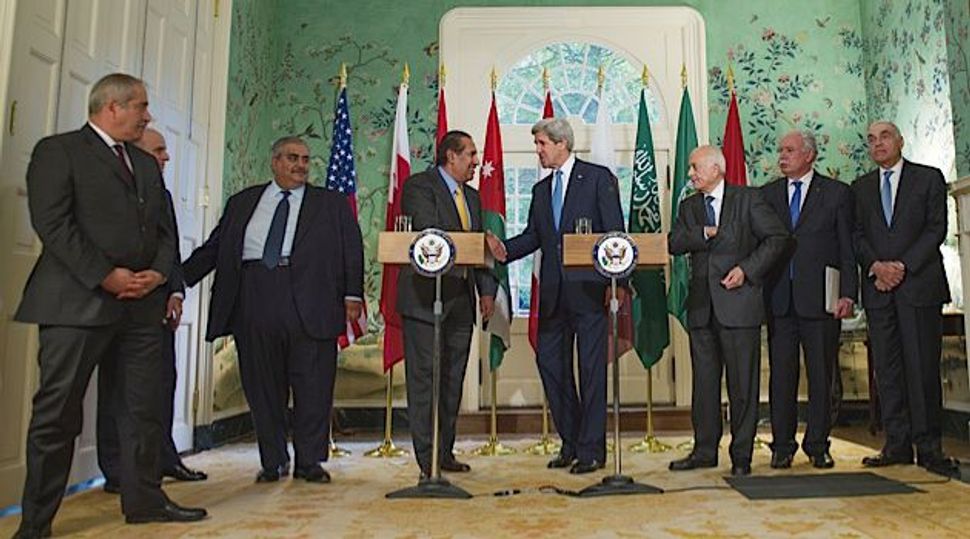 For Secretary of State John Kerry, it was a “very big step forward” when Qatar’s prime minister offered new flexibility in the Arab League’s long-standing plan for Arab states to recognize Israel in exchange for a settlement of the Palestinian issue.

But Kerry, who is still relatively new in his position, got an early tutorial on the icebound positions of the immediate parties and of some of the Arab League member states when it comes to Israel’s occupation of the West Bank and efforts to achieve a two-state solution to the problem.

Neither Israel nor the Palestinians shared his enthusiasm. And some leaders of countries within the Arab League soon disavowed the Arab League official’s seeming concession.

For some time now, the Obama administration has been playing up the potential usefulness of at least some elements of the 2002 Arab League plan as part of its effort to revive moribund peace negotiations between Israel and the Palestinian Authority — in particular, its offer of “normal relations” for Israel not just with a new state of Palestine, but with all 23 state members of the Arab League if and when an agreement is reached.

But so far, Obama administration efforts to revive the Arab plan have succeeded only in accentuating gaps within the Arab world and in provoking wariness from Israel.

It was one day after Kerry and Vice President Joe Biden met in Washington with Qatari Prime Minister Hamad bin Jassim al-Thani on April 29 that Kerry announced his breakthrough: Al-Thani, who leads the follow-up committee on the Arab League’s peace initiative, had offered leeway on the plan’s insistence that the border for a Palestinian state be identical to the border Israel had with Jordan before the 1967 Six Day War.

Under previous governments (though not this one), Israel, which rejects going back to the earlier border, had proposed land swaps with the Palestinians to compensate them for West Bank territory that Israel wished to retain in a final agreement. In his meeting with Kerry, al-Thani appeared to accept this idea. The Arab League, he said, would support an agreement that tweaked the borders with a mutually agreed on “minor swap of land.”

But two days later, Israeli Prime Minister Benjamin Netanyahu pointedly rejected Kerry’s suggestion that this represented progress at all, much less a “breakthrough.”

Netanyahu did dispatch Justice Minister Tzipi Livni, whose portfolio includes responsibility for the peace process, to Washington. Livni praised the progress made, but she also stressed Israel’s reservations, focusing on other, more difficult elements of the Arab League plan, such as its proposals regarding the right of Palestinian refugees to return to their now long-lost homes in Israel.

After meeting with Kerry on May 8, Livni called the new Arab League position “good news.”

“Peace with the Palestinians means also peace with the Arab world,” Livni said to Kerry. “So I wish to congratulate you on this successful meeting.”

On the Palestinian side, renewed interest in the Arab Peace Initiative also received a cool response.

Chief negotiator Saeb Erekat, while initially praising revival of the plan, said in a May 5 interview to the radio station Voice of Palestine that land swaps can be discussed only after Palestinians receive their sovereignty.

“The Arab League Initiative,” he added, “was approved at the Arab summit in Beirut in 2002, and any amendment to it requires another Arab summit.” Erekat said it is “impossible” for “one foreign minister” to “come and amend the plan” without the consent of all members.

Hamas, Fatah’s rival, which is in control of Gaza, strongly rejected any change to the Arab League’s plan. “To those who speak of land swaps, we say: Palestine is not a property; it is not for sale, not for a swap and cannot be traded,” said Ismail Haniyeh, prime minister of the Hamas government in Gaza.

Even members of the Arab League found it difficult to embrace al-Thani’s concessions. Their responses highlighted the divergent opinions within the group and the changes that Arab countries have gone through since the plan’s launch 11 years ago.

Egypt, once a staunch supporter of the initiative, made clear that it did not back the new concessions. Foreign Minister Mohamed Kamel Amr, a member of the Muslim Brotherhood government headed by Mohamed Morsi, denied that members of the league agreed to any changes in the plan. He told reporters in Cairo that “any talk of land swaps being merged into the proposal is not true.”

Saudi Arabia, the key sponsor of the original initiative, has taken a backseat to the latest attempts to revive the plan, leaving Qatar to lead the talks on behalf of the Arab League.

While the Arab Peace Initiative was unprecedented at the time in its offer of a wider peace between Israel and the Arab states in exchange for an agreement between Israel and the Palestinians, Israel flatly rejected the plan when it was first launched. Israeli leaders objected in particular to the plan’s use of the 1967 borders as the baseline for any resolution, and to its mention of a United Nations Security Council resolution recognizing the Palestinian refugees’ right of return to Israel.

Still, in the intervening years, some Israeli officials have felt tempted to engage it. In 2009, President Shimon Peres expressed satisfaction at the “u-turn” in the attitudes of Arab states toward peace with Israel as reflected in the Arab League initiative. As for the parts Israel objected to, “Israel wasn’t a partner to the wording of this initiative,” Peres said. “Therefore it doesn’t have to agree to every word.”

David Makovsky, a senior fellow at the Washington Institute for Near East Policy, a think tank supportive of Israel, saw the plan’s most recent attempted revision and relaunch in somewhat similar terms.

“We should look at this more as a way of getting the Sunni Arab states, that have been so busy in their own business, to recommit to the two-state solution and to help the Palestinian Authority,” he said. Makovsky cautioned that expectations for a breakthrough based on the Arab Peace Initiative are exaggerated, but that achieving a more modest goal of providing the Palestinians some political cover to move forward with the peace process would be a sign of success. Kerry, Makovsky said, “wants to show the Palestinians they are not on their own on this.”

Robert Danin, a former State Department Middle East expert, said he thought that Netanyahu was “wise to stay back right now and let diplomacy take its course.” An early endorsement from Netanyahu, he explained, could send a message to the Arab world that the concessions offered were too generous.

According to Danin, who is now a senior fellow at the Council on Foreign Relations, the problem with the Arab League Initiative has always been the way it was marketed to the public.

The plan was launched shortly after the March 27, 2002, terror attack on a Passover Seder in Netanya, which killed 30 Israelis and shocked the nation. Still, Arab leaders did not address the issue of terror in their statements. And in the months following the Arab League’s adoption of the peace initiative, Arab leaders made no effort to reach out to the Israeli public or to demonstrate the potential benefits of the plan’s offer of normalization. The initiative was largely ignored by Israeli public opinion.

After Kerry’s attempted resurrection of the Arab League plan with al-Thani, it was Peres, a figurehead president without governing power who, once more, sought to highlight the bright side. “The ministers of the Arab League once again expressed their support for the two-state solution, which is also accepted by us, and a broad structure of support is being created for making progress,” he said during a meeting with Pope Francis at the Vatican.

James Zogby, president of the Washington-based Arab American Institute, saw the plan’s import somewhat more cynically. “We all know that the gift from the Arab League will not move anything forward,” he said. “So the concessions only deepen the divide on the Palestinian side. Other than Qatar gaining some points with the U.S., nothing will change.”