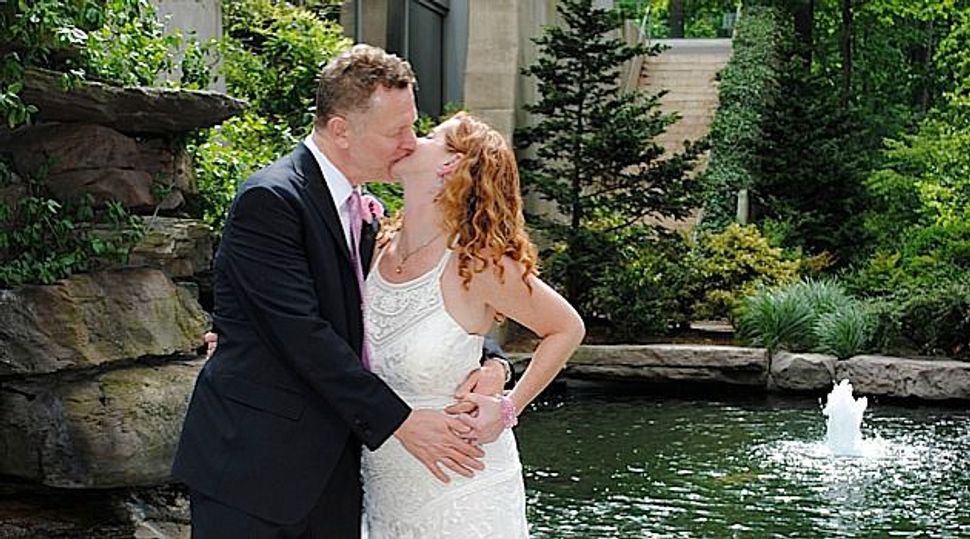 Second Time Around: Judy Acs Seidman Zucker and Alan Zucker dated outside the faith after their first marriages ended, then found each other on JDate. Image by Samantha Zucker

On a chilly evening in March, a crowd of 40- and 50-somethings — dressed in everything from power suits and long fur coats to metallic bows and oddly sequined pants — descended upon a Murray Hill restaurant for a night of speed dating with HurryDate, a 12-year-old dating company based in New York.

The Manhattan neighborhood is known as a mecca for young Jewish singles straight out of college and eager to mingle (and probably do more). But this evening was all about the boomer set. While the music may have been softer and the shots of Jäger may have been replaced by glasses of wine, make no mistake: Everyone was still checking each other out.

“I come to this with the glimmer of hope that in the woefully short time of four to five minutes I’ll make a connection,” one man said.

Dressed in a dark suit and holding a beer in his hand, he admitted his age (56), marital status (divorced) and profession (commercial real estate broker), but like every participant I spoke to that night, he refused to give his name.

As more baby boomers re-enter the dating scene, they encounter a new and unfamiliar landscape. The generation that challenged gender and sexual norms is learning to adapt to a dating world that relies on the Internet and social media — with the responsibilities of children, mortgages and jobs in tow.

In a 21st-century dating culture where bouquets and chocolates have given way to online dating, hooking up and sexting, many boomers still seek the almost-obsolete long-term companion. But the road to love is even rockier on the other side of the hill.

The biggest change, for better and for worse, is the Internet. Many Jewish boomers have jumped on the online dating bandwagon. Thirty-three percent of JDate users are over 50, and that segment has increased 93% over the past five years.

Still, online dating feels foreign and emotionally unsatisfying to many. Jackie Weinberger, a divorced 50-year-old, said her relationships from JDate “felt forced” compared to meeting people in person. “I don’t think the people I met online ever made a connection with me,” she said.

Furthermore, the cache of being a “player” now lasts longer than ever before, as some boomer men harness online dating to stroke their egos, maximizing the quantity, if not quality, of relationships.

“A lot of online guys are looking to say ‘I went out with 15 people, how cool am I?’” Weinberger said. “Now, it’s much more anonymous so you can date a lot.”

And men’s upper hand in dating only magnifies with age. Joysa Winter, JDate’s “Matchmaker Rabbi” advice columnist and veteran of the Jewish baby boomer singles scene, explained that the greatest dating challenge for heterosexual women is that so many men seek mates 10 to 15 years younger.

“As long as women buy into the myth that ‘older men are more mature’ and men buy into the laughable belief that they ‘can’t help’ the fact they are ‘more attracted’ to younger women, we will continue to have the dating double standards that we have now,” she told the Forward by email.

Dating becomes even more limited when singles live in the suburbs with kids to care for and no other parent to count on. This March, four divorced mothers sat around a beautifully set kitchen table in Westchester, N.Y., drinking white wine and eating Italian takeout.

They laughed and dished about dating, but familial responsibilities were always at the forefront: Each had her cell phone out to instantly field texts or calls from her children.

Like the singles at HurryDate’s speed-dating event, these women only agreed to be identified by pseudonyms for this article, for the sake of their own privacy as well as that of their children. Their requests for anonymity reflect the difficulties and stigmas of dating while parenting.

“You’re not mobile, like how you are in your 20s. You have so many more restrictions with children,” said Kate, a mother of two in her 50s. “When you’re first starting out, if you have a relationship with a guy and he gets a job in California, you move.”

Once kids are involved, dating can become a logistical nightmare. Not only do singles need to plan dates around their children’s schedules, but they must decide whether or when to introduce their kids to their dates. Still, these four women felt that entering the dating world in their 40s and 50s with their so-called “baggage” helped to sharpen their priorities.

“When I was 25, I needed someone who was going to be successful and ambitious,” said Sarah. “My husband was so ambitious he wasn’t home at all. Now that I’m older, I see what I want in someone.”

The elephant in the room for single Jewish boomers is religion. Second marriages are twice as likely as first ones to be interfaith, said Sylvia Barack Fishman, a professor of contemporary Jewish life at Brandeis University.

As Jewish singles age, they are more likely to marry outside the faith, Fishman explained, and less likely to face pressure from their families to marry someone who is Jewish.

“As the pool gets narrower, other things become more important,” she said.

“If I conjured the most perfect guy, he’d be Jewish,” Weinberger said, yet she sees benefits of marrying outside the faith. “With the Seders, you’d never have to argue over whose family’s house you’re going to. He’d come with me, and I could go to his family for Christmas.”

Another benefit to dating later in life is that it often frees Jews to date non-Jews since they are not looking to start a family.

“Now that I’ve raised my kids, I am much more open,” said one Westchester woman. Still, she wants her children to marry within the faith.

But being open doesn’t come without difficulties. Judy Acs Seidman Zucker, 50, was originally willing to date outside of Judaism after her first marriage had produced Jewish children. However, when a date got annoyed that she didn’t pick up her phone during Passover, she realized, “I needed to date someone who knew where I was coming from.”

Regardless of religion’s role in dating patterns, boomers all come to dating with a clearer sense of what’s important to them than they had when they were younger. As one of the Westchester women said, “In your 20s, you saw people the way you wanted to see them. When you’re older, you become more realistic, but you also become less judgmental.”

That understanding of others is an essential advantage to boomers. JDate’s Winter believes the key to finding one’s bashert (soulmate) later in life is being open to new people and possibilities. “Let someone unfold and show you who they really are, unencumbered by your expectations.”

Emily Shire is a writer based in New York City. Follow her on Twitter at @eshire and find her work at www.emilyshire.com.