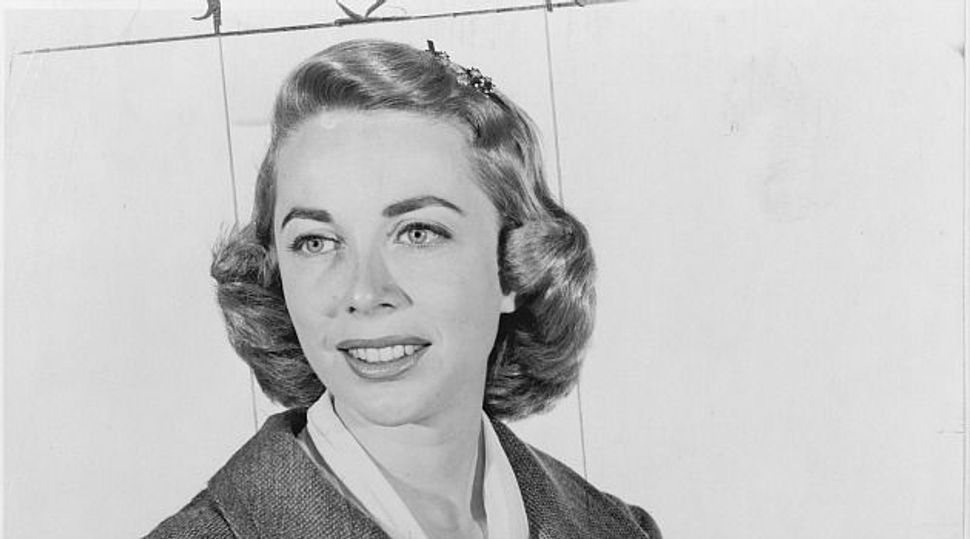 The Jewish psychologist Joyce Brothers, who died May 13 of respiratory failure at age 85, was a peacemaker in the emotionally fraught field of pop media therapeutic counseling. Born in Brooklyn as Joyce Bauer to a married couple of attorneys, Brothers became a primary authority on how to live in the mid-century suburban age.

Although Brothers would dish out advice in newspapers, radio and TV like Anne Landers and Abigail van Buren, her persona was paradoxically closest to that of Gertrude Berg, the warmhearted matriarch Molly Goldberg in “The Goldbergs,” a radio and TV staple. Unlike Goldberg’s joyously ethnic persona, Brothers was a maternal Jewish psychologist whom Middle America would not have hesitated to invite to its restricted country club. Petite and blond and sporting an immaculate pageboy hairstyle, wearing glittery hostess gowns suitable for a ballroom dancing championship, Brothers was an unflappable presence, soothing and calming.

Brothers began on TV by competing twice on quiz programs that were later charged with being rigged, although her own probity was never convincingly impugned.

In 1955, she was the only woman ever to conquer “The $64,000 Question,” striding through unperturbed, having acquired a talmudic grasp of the intricacies of the history of boxing. Able to spout not merely fighters, decisions and rounds, but also names of referees, Brothers triumphed with only an occasional glance to the heavens. Small wonder 1950s America took her to its heart, and in those alarming years, Jewish Americans needed solace as much as anyone. Brothers would continue to provide comfort, as the cultural historian Sander Gilman noted, offering the possibility of peace of mind while evoking her own “Jewishness in a very subtle and understated manner.”

Her first TV program on pop psychology was broadcast in 1958 at the height of Cold War paranoia, with its public service films warning students about dire dangers of everything from imminent nuclear destruction to premarital sex. Next to these cloddish statements, Brothers offered some of the gracious glamour of Loretta Young and an upbeat, understanding nature. She strongly differed from many of her predecessors in the field of pop psychology but, though she radically altered what a television psychologist could be, she should not be blamed for today’s grotesquely confrontational versions, from Dr. Phil to Dr. Laura.

By contrast, Brothers’s benign presence was catnip for TV chat show producers eager to confront her with obstreperous comic acts. With all, she maintained the aplomb of a mental health professional locked in a ward for violent patients. Brothers’ homilies about the importance of couples paying attention to each other, or the pitfalls of the concept of love at first sight and other such advice, were so well oiled that it was impossible to distinguish between her spiel on genuine talk shows — she was a favorite on Johnny Carson’s “The Tonight Show” and on “Late Night With Conan O’Brien” — and those of meta-talk spoofs such as Garry Shandling’s “The Larry Sanders Show.”

Her film appearances ranged from good-natured cameos in such comedies such as “The Naked Gun: From the Files of Police Squad!” (1988) which mocked her media omnipresence by casting her as a baseball announcer, to dire direct-to-video bombs such as “Dorm Daze 2” (2006).

Although she produced books, Brothers was not like other Jewish psychologists, such as Erich Fromm (author of “The Art of Loving”), who won popular renown by penning print best-sellers. Instead, she personally incarnated an understanding approach to counseling, offering the possibility of psychology as a nurturing remedy for her era.