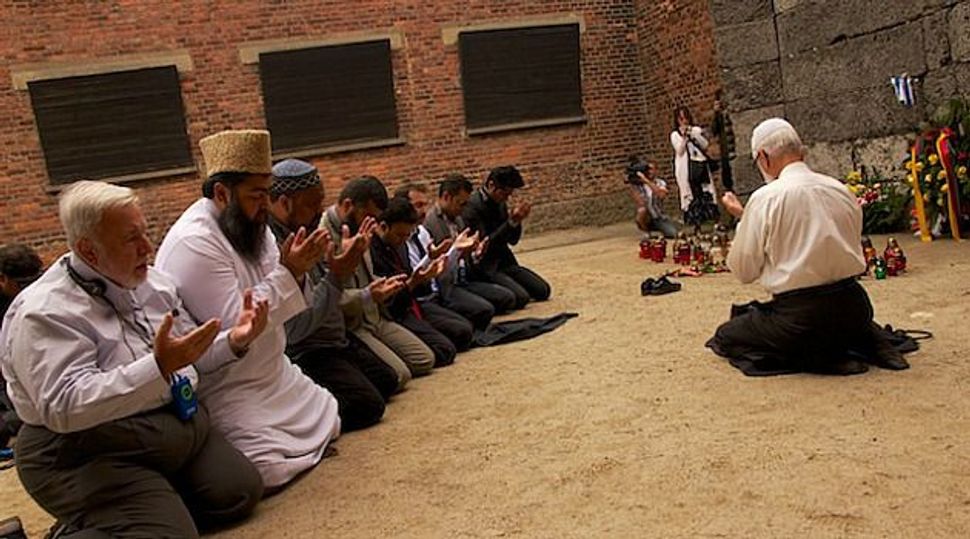 Muslim clerics pray at the Auschwiz concentration camp in Poland during a visit in May to learn about the Holocaust. Image by a.j. goldmann

When Muslims tour Auschwitz and other sites of the Jewish Holocaust, and encounter survivors of that genocide face-to-face, the points of connection they make can be quite unpredictable.

For Barakat Fawzi Hasan, a Palestinian assistant professor in Islamic Education at Al-Quds University in Jerusalem, a moment of clarity came as he and his co-religionists listened, spellbound, to Lidia Maksymowicz as she told her harrowing story of survival. Although she was only five years old when she was liberated from Auschwitz, Maksymowicz could still remember the taste of buttered bread and coffee with milk given to her by the Soviet soldiers who entered the camp.

“As Palestinians who have felt for 65 years the pain of being displaced, we feel the pain of the others,” said Hasan after hearing her talk. Seeing the children’s belongings at Auschwitz, reminded him of “some of the stories of the children of Palestine,” he added.

Hasan said that he would like to bring Holocaust survivors to Palestine to relate their stories. “I cannot hold back my tears when I see the tragedy that took place here in Europe, especially what happened to the Jews. I hope that Palestinians and Israelis take a lesson from all of this and that we both have a future of hope and peace.” 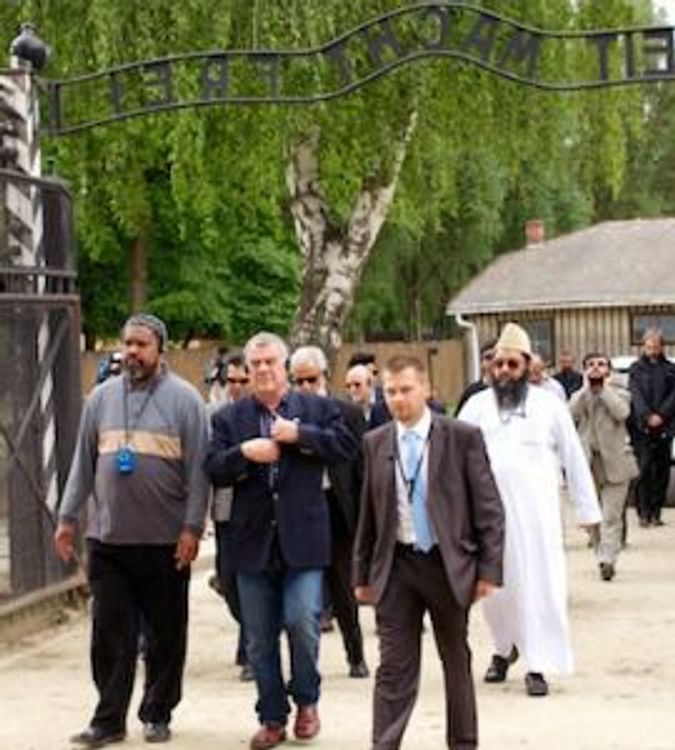 For Muhamed Jusic, a religious education teacher from Bosnia, the touchstone was his own first-hand experience of genocidal war in his native land during the break-up of Yugoslavia in the 1990’s.

“For many people to visit such places is just history,” said Jusic, who is also a public affairs commentator and interfaith activist back home. “For me it isn’t. The fact that I come from Bosnia affects everything that I saw here. My personal experience of the war and the things that I went through emphasize that we need to learn and study about what happened during the Second World War because what happened in Bosnia proves that it can happen again, maybe not on the same scale, but it can be repeated.”

Marshall Breger, an Orthodox Jew, has seen such reactions from Muslims before. In 2010, he and Rabbi Jack Bemporad, organized a similar trip for American Muslim leaders. But the trip Hasan and Jusic took part in, from May 17 to May 24, was designed by Breger, Bemporad and Suhail Khan, a senior fellow at the Institute for Global Engagement, to be international in scope.

“It’s the nature of religion in America to have a little more tolerance, and for clerics in America to know a little more about other religions,” said Breger, a former senior official in the presidential administrations of Ronald Reagan and George H.W. Bush. “Many of the people on this trip, frankly, at best knew nothing. I say ‘at best’ because they probably have read ‘Protocols [of the Elders of Zion’] or other things.”

The undertaking proved far more daunting than the previous trip for American Muslims. Just obtaining visas for some of the participants proved incredibly difficult. Several of the confirmed participants never showed up. Others arrived late, due to travel restrictions. Hasan, who as a Palestinian is stateless, with no passport of his own, was granted a visa to go abroad by Israel but denied passage through Ben Gurion International Airport. Instead, he had to travel to neighboring Jordan and fly from there to Germany. 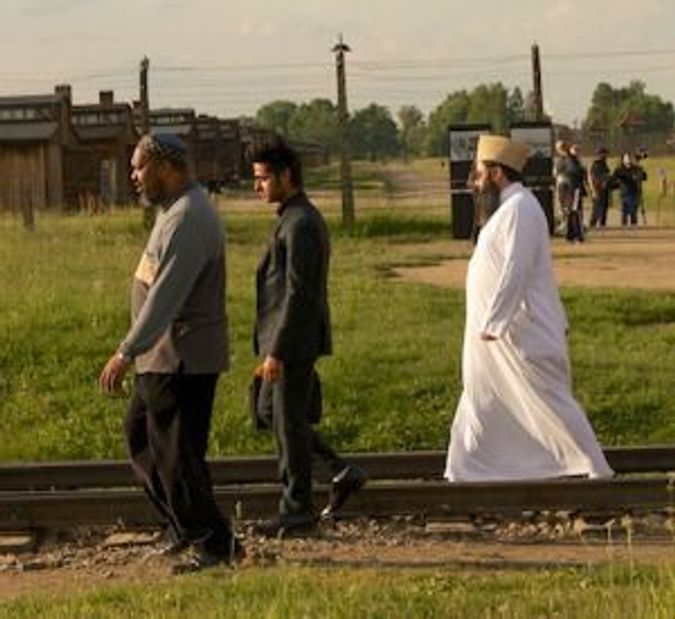 “We moved heaven and earth to get them here. They’re heroic,” said Bemporad.

In the end, a dozen Muslims attended the week-long program — imams, educators, activists and scholars drawn from all over the Muslim world, including Saudi Arabia, Jordan, the Palestinian Authority, Bosnia, Turkey, Nigeria, Indonesia, India and the United States.

The tour, which included visits to concentration and extermination camps in Germany and Poland, was funded by the U.S. Department of State and S.A. Ibrahim, an Indian American businessman and interfaith activist. Additional support came from Poland’s Foreign Ministry.

“People use the Holocaust for all sorts of political and ideological purposes,” said Bemporad, explaining his rationale for the excursion. “If you want to change people’s ideas, you need to present them with the actual experiences of a person who went through it, you need to see the actual conditions and know something about the history.”

Bemporad, director of the New Jersey-based Center for Interreligious Understanding, which sponsored the trip, said he hoped the experience would inspire participants to speak out against Holocaust denial in their countries as well as help them understand that when it was happening, the Holocaust “had nothing to do with Israel.”

At several points, the participants made a clear connection linking the fates of Muslims and Jews. One such moment occurred inside of the crematorium at Dachau, where the participants recited the Janazah — the Muslim prayer for the dead — for Noor Inayat Khan, an Indian Muslim anti-Nazi spy who was murdered at Dachau in 1944.

The program also visited several sites of Muslim interest, including an excursion to the architecturally striking mosque in the Munich suburb of Penzberg, a rare success story in Germany, since it was built without any of the controversy that often accompanies such projects there today.

The group was also supposed to tour Munich’s grand Orthodox synagogue and meet Jewish community leaders, but community president Charlotte Knobloch flatly refused to welcome the delegation. In the city that was once Hitler’s ideological stronghold, Knobloch’s refusal to engage seemed particularly a missed opportunity.

“I thought it was very important for the imams to see that Jewish life — and in particular Jewish religious life — in Munich has not been destroyed,” a disappointed Breger said.

After Munich and Dachau, the group went on to Warsaw, where they toured the recently-opened Museum of Polish Jews and met with Holocaust survivors and with Righteous Gentiles, as non-Jews who saved Jewish lives are known. That night they dined with Poland’s chief rabbi Michael Shudrich and several Polish imams. The participants were impressed by the solidarity between Jewish and Muslim leaders, which has been strengthened by recent debates in Poland about hallal and kosher slaughtering.

From Warsaw, the group was driven to Auschwitz. There, they toured both the museum at Auschwitz 1 and Birkenau, many with tears in their eyes. As the group viewed the exhibitions housed in the former barracks, Imam Mohamed Magid, an American veteran from the first trip, routinely added commentary to the official guide’s explanations.

“I want everyone to know that behind every object here there was a real human being,” he said, stopping before a vitrine full of children’s shoes. “You can hear their footsteps,” he added chillingly. Before entering the gas chamber in Auschwitz I, he turned to the group:

“As you go in, I’d like you to imagine that screaming, to imagine the crying. We go here in a nice bus, we had a nice lunch and later we’re going back to the hotel,” he reminded his fellow visitors.

The most remarkable moment came when the group decided to take their afternoon prayers in front of the infamous “Wall of Death.” Imam Muzammil Siddiqi of the Islamic Society of Orange County, California, another participant in the 2010 trip, led the service. The participants kneeled down on the naked earth and genuflected repeatedly, the coarse dirt sticking to several foreheads. By the time the group reached Birkenau, they were running several hours behind schedule. But the participants collectively defied an irate bus driver in order to spend the extra time walking along the “Judenrampe” to the site of the crematoria.

“None of us is here out of curiosity,” said Safi Kaskas, a businessman and interfaith activist who was born in Lebanon, has U.S. citizenship and lives in Saudi Arabia. “We’re all here because we care deeply about human suffering and what happened to the Jews.”

“It’s important to understand what happened to the Jews, to understand and appreciate the suffering they’ve been through…in order to better communicate,” he explained, “in order to convince my Jewish neighbors that it is better to have peace than to have war [so] the suffering they experienced in Europe should not repeat itself in the Middle East.”

Echoing the sentiments of many of the other participants, Jusic, the Bosnian religious educator, said that the proper meaning of Auschwitz belongs not to the past, but to the future. “We cannot go back and help those children and women we saw and those innocent people being gassed and burned, but we can make sure that it doesn’t happen to anyone else,” he said.

Breger was pleasantly surprised at the trip’s end, when the participants all signed a public condemnation of Holocaust denial nearly identical to the one that was drafted by the 2010 group.

Breger added that he was now looking to organize a third trip that would bring rabbis and imams together to visit both Auschwitz and Srebrenika, the site of the July 1995 Serbian massacre of 8,000 Bosnian Muslims, which many Muslims perceive as an example of the West looking the other way while Muslims were slaughtered. “By speaking to that belief, you would go a great way towards making it easier to engage with the tragedy of the Shoah and Jewish pain and trauma,” said Breger.