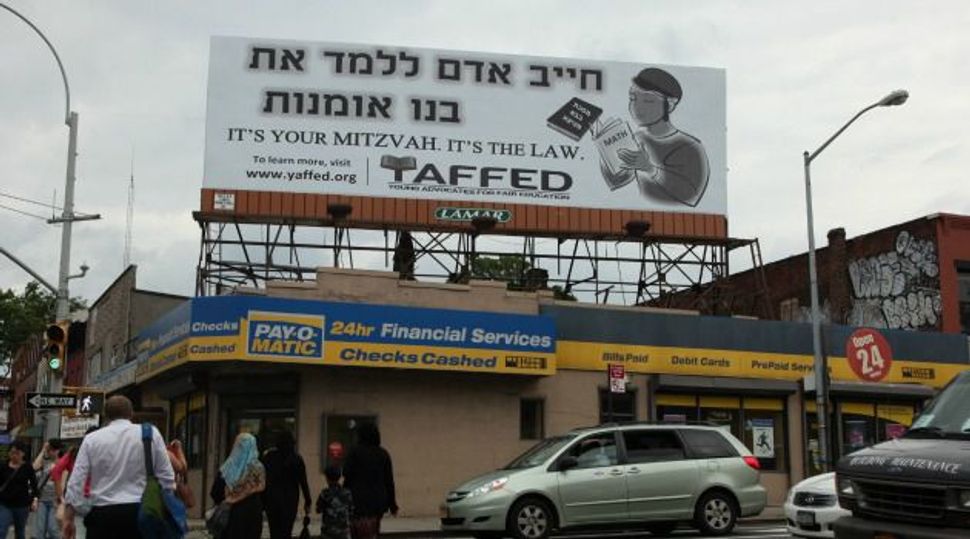 Arm Yourself: Billboard in Brooklyn urges ultra-Orthodox Jews to seek real-world skills along with religious training. Image by shulamit seidler-feller

Gedalya Gottdenger’s dream is to get a degree in psychology. But unlike most 21-year-olds, Gottdenger lacks a basic education, even though he has been studying since he was a child.

Gottdenger, who grew up in a Hasidic community in Brooklyn, is a product of ultra-Orthodox Jewish day schools in which, numerous students report, math and English classes are barely taught, despite state laws requiring such instruction.

“In the heder we had English and math classes, but it was always at the end of the day and lasted only an hour each,” Gottdenger said in a telephone interview with the Forward. “It was like a joke; the focus was entirely on keeping us in the class for two hours in order to show the government that we were being taught English, but it was nothing to do with actual teaching.” 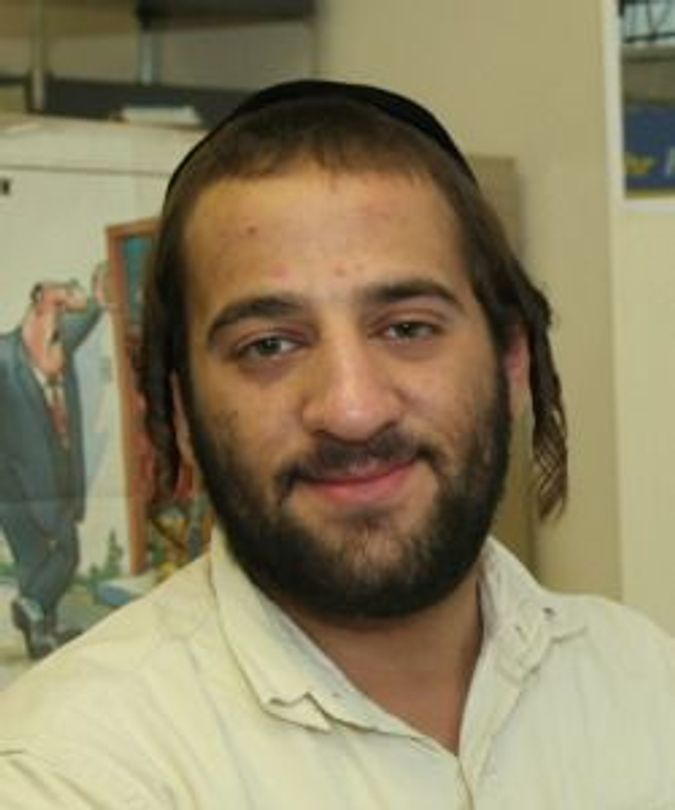 The situation got even worse during his high school years, when Gottdenger attended a Viznitz yeshiva in the Brooklyn neighborhood of Boro Park.

“In the yeshiva there was nothing whatsoever; they weren’t even pretending to teach,” Gottdenger recalled. “From age 13 to 18, I did not have any English or math classes. I left there with pretty much zero knowledge in English or math.”

(Efforts to reach officials at Ahavas Israel and Imrei Chaim, the Brooklyn schools that Gottdenger attended, for responses to his allegations were unsuccessful despite repeated phone calls.)

On June 5, Gottdenger saw a huge billboard while driving on the Brooklyn-Queens Expressway that reminded him of the dilemma he faces. The advertisement quoted a phrase from the Talmud (in Hebrew): “One should make sure to teach his son a trade.”

The billboard was funded by Yaffed, an advocacy group of individuals raised in ultra-Orthodox communities, that seeks to improve secular studies in New York’s ultra-Orthodox day schools. According to Naftuli Moster, founder of Yaffed, the goal of the ad is to create an attitude change.

“We want to go past the community leaders and go directly to the people,” Moster, 27, said in a phone interview with the Forward. “To get to those people who do believe in education and enable them to speak up and ask their leaders to make some changes so their children can have a better future.” 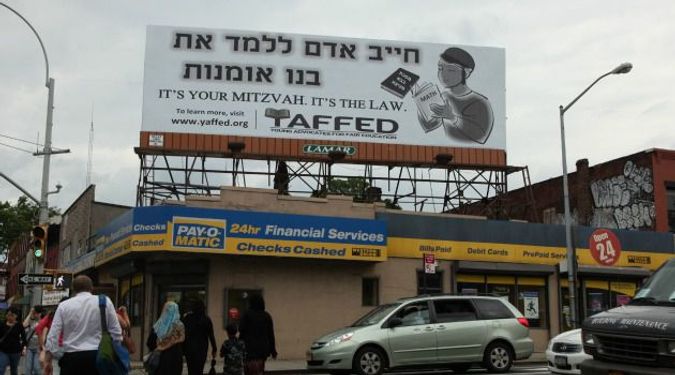 Arm Yourself: Billboard in Brooklyn urges ultra-Orthodox Jews to seek real-world skills along with religious training. Image by shulamit seidler-feller

Moster, who grew up studying in religious schools in Brooklyn, said that when he wanted to receive a higher education, he could barely get through the college application. He ultimately succeeded, however, and today he is studying for a master’s degree in social work at Hunter College. Now, Moster hopes to change the educational institutions in his community, to have them better prepare young people for college and the job market.

“The poverty rate [in ultra-Orthodox communities] is skyrocketing, and by continuing to not provide a good education it will only get worse,” Moster said. The problem, he warned, is bound to affect all of American Jewry. “This is the only Jewish community that is growing and growing fast,” he said, alluding to the sharp increase in New York Jewry’s ultra-Orthodox population, as found in a recent comprehensive demographic survey by UJA-Federation of New York. “If they don’t change, it will be bad for the whole Jewish community.”

The billboard, which was strategically placed overlooking a highway that many ultra-Orthodox Jews use daily to get to Manhattan and other destinations, has been igniting discussion within the community.

Yossi Gestetner, who provides public relation services for Orthodox clients and writes news commentary for Kol Mevaser, a Yiddish-language news outlet, said that photos of the billboard have made the rounds and that people have been talking more about the topic, but he doesn’t expect what he called an “in-your-face tactic” to have any real impact.

Agudath Israel of America, an umbrella group of ultra-Orthodox organizations, told the Forward that it counsels all Jewish schools to comply with all aspects of secular law, and distributes regular memorandums to emphasize the government-mandated obligations. But Avi Shafran, the group’s director of public affairs, criticized the billboard’s message and the messenger behind it.

“There is, I think, a justified wariness in Haredi communities of individuals or groups who see themselves as on crusades to save Haredi Jews from themselves,” Shafran wrote in an email. “When the crusaders are erstwhile members of Hasidic communities who, for whatever reason, have left those worlds, the intentions of the reformers are, rightly or not, particularly suspect to many.”

In addition to Haredim, the ad’s other target is the New York City Department of Education, which, Moster charged, fails to enforce state laws requiring ultra-Orthodox religious schools to teach subjects like math, English and science. In response to the Forward’s request for comment, the DOE stated, “Private schools are expected to follow state requirements to provide an instructional program equivalent to that provided in the public schools. If a serious concern is raised about whether a private school is providing an equivalent instructional program, the DOE works with the private school to review the school’s curricula and address the concerns.”

The department said it was unable to determine by the Forward’s deadline whether it had ever worked with any yeshivas to address such concerns.

In the meantime, Gottdenger, like many other young people in his community seeking further education, must now make up for everything he was not taught earlier.

“For the [psychology] studies, I need to actually know a basic foundation of math, and I seriously know nothing,” Gottdenger said. “My plan is, for now, to go to Brooklyn College and take the classes that don’t require math foundation, and I hope within a year or two to teach myself math.”