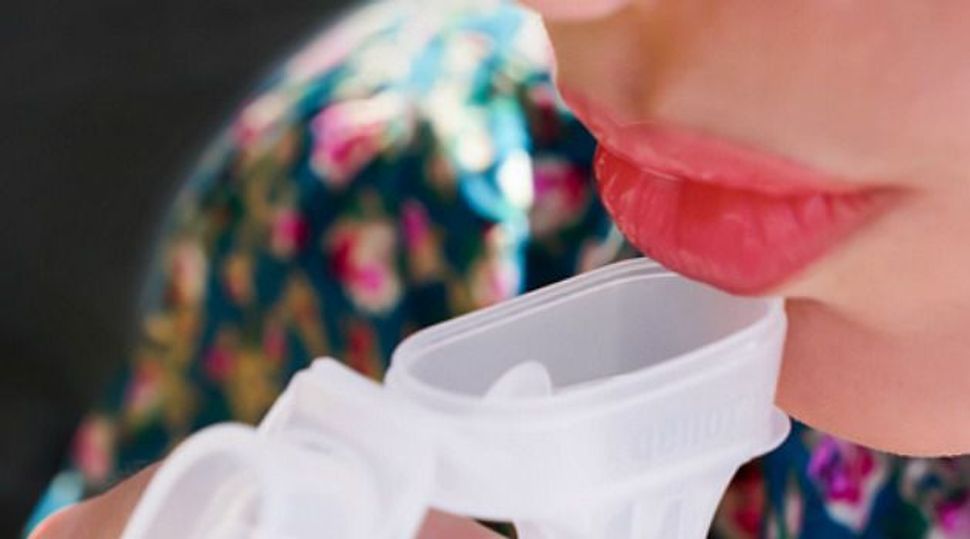 Catherine Afarian calls herself a “love child of the ‘70s.”

Her mother discovered that she was pregnant after she had broken off a relationship of less than a year. Afarian has never met her biological father, but her mother always said he came from a big Italian family, and Afarian got a kick out of Italian colleagues telling her she looked just like a “Roman girl.”

In late 2010, though, Afarian learned that a big part of her identity had been based on very shaky ground.

As a new employee at 23andMe, a personal genome company based in Mountain View, Calif., Afarian had submitted a spit sample for a DNA analysis. Based on the variations in her genes, 23andMe estimated her health risks and traced her ancestry.

Afarian had already been diagnosed with Crohn’s disease, so she wasn’t surprised to learn that her genes put her at a much higher-than-average risk for the chronic digestive tract condition. But she was taken aback to find that 23andMe classified 48.9% of her DNA as Ashkenazi. Italy didn’t even show up on her ancestry composition. Her mother isn’t Jewish, so 48.9% had to have come from her biological father.

While her revelation was more dramatic than most, Afarian is one of a growing number of non-Jews fascinated with the discovery of a Jewish ancestor’s footprints in their DNA, thanks to testing that has become much more affordable — $99 or $199, depending on the company — than it had been only a few years ago.

“I think people are attracted by this idea of being part of a lost tribe,” said Misha Angrist, an assistant professor at the Duke Institute for Genome Sciences and Policy and the author of the 2010 book “Here Is a Human Being: At the Dawn of Personal Genomics.” “More generally, I think people perceive Jewish ancestry as somehow exotic.” Not necessarily Angrist, because all four of his grandparents were Ashkenazi, and 23andMe revealed no surprises there.

Anthropologist Sandra Lee, a senior research scholar at the Stanford Center for Biomedical Ethics, has studied the reasons that 23andMe customers sign up for the service. In her research, she has found that about 40% say their primary motive was to learn more about their ancestry. “People are looking for the unexpected, using the genome to excavate an unknown past, some detail about their life that hasn’t been revealed to them,” Lee said.

Lee says she suspects that the Ashkenazi Jewish identity is particularly interesting for such seekers because of its “very strong cultural component as to what makes somebody Jewish.” People who discover they must have had an Ashkenazi ancestor are likely to examine whether anything in their lives might reflect that, Lee says.

He noted that unexpected ancestry findings in DNA “catalyze a whole bunch of discussions, particularly with family members. It can be exciting. It also can be, at times, a painful type of exploration. It’s really about ideas about who one wants to be and what the possibilities are for the future.”

That has certainly been Afarian’s experience. “I have this entire culture now that I need to explore,” she said, noting that she’s always had plenty of Jewish friends. “I don’t know what you serve at a Seder dinner, but I know that it’s really important. I have a lot of Yiddish to learn. I definitely like the idea that I’m part of this larger community. This is a significant part of who I am, and on some level I want to understand this better.”

Afarian, who says neither she nor her husband, a product of Catholic schools, is particularly religious, isn’t rushing to convert, but she wants their 2-year-old son to learn about what it means to be Jewish from someone who knows, “and that’s not me.”

Afarian says her biological father’s name, which her mother had told her early on, sounds neither Italian nor Jewish. Her mother, who took her children to Methodist and Baptist churches when they were younger, thought of Judaism as a religion but not as an ethnic group that could be detected in DNA.

James Francis was twice Afarian’s age when his DNA revealed that he must have had a Jewish ancestor. Francis’s reaction to the news that 23andMe classified 10.6% of his DNA as Ashkenazi? HUH? “I said, ‘What?!’” In fact, none of the countries on his ancestry composition list comes close to that 10.6%. Ukraine, Russia and Poland top the list, with, respectively, 2.6%, 1.9% and 1.3% .

“I’m really happy about this, because I always suspected it,” said Francis, 75, who lives in Corpus Christi, Texas, and describes himself as “a good ol’ South Texas boy.” As a result of his genealogy research, he “just thought at some point, somewhere, somebody was Jewish in the family. “

He thinks it’s a grandfather or great-grandfather on his mother’s side, and he thinks he knows the man’s name. “Growing up, I was always curious about where my grandparents and great-grandparents came from,” Francis said. “My mother’s ancestry was German, and she spoke the language.”

He added that his father always used to say his family was Scotch-Irish, but “research and DNA have debunked that.”

Family Tree DNA, based in Houston, claims to have the largest comparative Jewish database in the world. It includes comedians Larry David and Jason Alexander (but not Jerry Seinfeld), according to President and CEO Bennett Greenspan.

Greenspan tells of a young woman who, raised Catholic, learned through testing with his company that she had a Jewish great-great grandfather. “This girl was shocked,” Greenspan said. She told him that throughout her life, half her friends have been Jewish.

That’s a common refrain from non-Jews who discover Jewish ancestry, Greenspan says. “They’re telling me, ’We knew that all along.’ It happens all the time,” he said.

Besides leading the company, Greenspan runs Family Tree DNA’s “Semitic desk,” where, he says, Evangelical Christians, Jews for Jesus and other gentiles who observe some Jewish practices are eager to uncover even a bit of Ashkenazi DNA lurking in their chromosomes.

“It’s a big deal for some of these guys if they can show they have some Jewish ancestry,” he said, because they think a pinch of Jewish DNA would give them credibility in their proselytizing efforts.