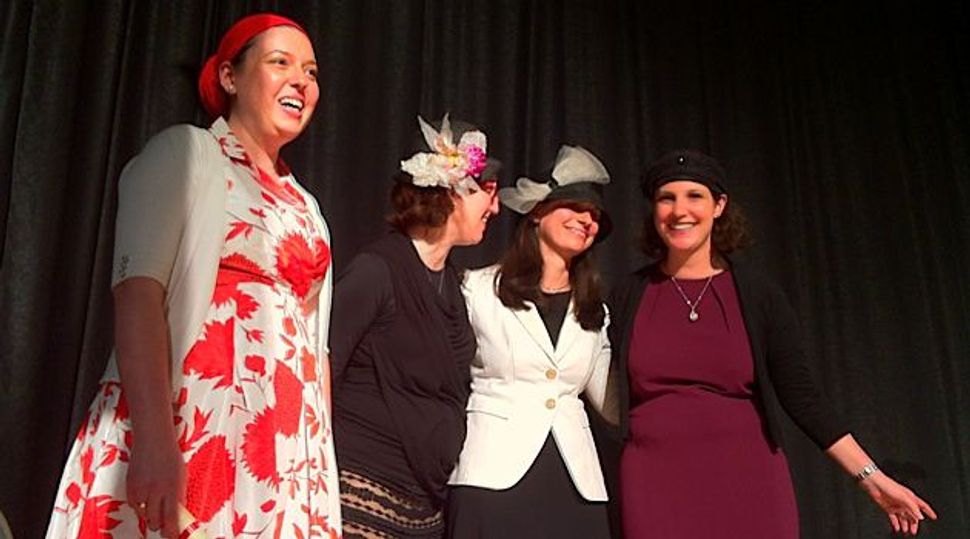 Sunday’s inaugural graduation at Yeshivat Maharat was no ordinary cap and gown ceremony. Rather, it was history in the making for Orthodox women.

As Ruth Balinsky Friedman, Rachel Kohl Finegold and Abby Brown Scheier prepared to become the first women to hold the title maharat in the Jewish community, faculty members of the school and nearly 500 guests at the event, stressed that the historic nature of the June 16 event could not be understated.

Though the graduates are not the first women to take up positions as religious leaders within the Orthodox tradition, they mark the beginning of an institutionalized role for women who want to take their place as guides in their communities.

The enthusiasm in the room on the Upper East Side of Manhattan was palpable as the leadership of Yeshivat Maharat rose to praise the graduates. Rabbi Jeffrey S. Fox, rosh yeshiva or the head of the school which is based in the Bronx, compared the reactions within the wider Orthodox community to the uproar at the opening concert of the “Rite of Spring” ballet in Paris in 1913. “Fistfights erupted and people were escorted out of the theater,” he said.

But with hindsight, he explained, Igor Stravinsky’s innovation came to be appreciated and admired. So, he added, will it be with Orthodox women in clergy positions.

“It is not often we are blessed to appreciate that we are witnessing history,” he concluded. “The time has come.”

Despite the sense that this moment was long in coming, the graduates were quick to thank those who had come before them. “This moment in history was going to happen with or without me,” Kohl Finegold told the attendees in her graduate address. “I stand on the shoulders of those women who first cracked open a gemara.”

In a video made to explain the graduates’ path towards this moment, Brown Scheier explained that is important for women to be able to lead. As the wife of a congregational rabbi, she found herself as “kind of a first lady,” for her community, she said. “I wanted to make sure that when people come to me with questions, I could answer them, and not just say ‘Oh, go ask my husband.’”

Addressing the crowd, Rabbi Avi Weiss, whose ordination of Sara Hurwitz, dean of Yeshivat Maharat, as rabba in 2009 made this graduation possible, was overwhelmed. “It’s not always that dreams are fulfilled in our lifetime, but here we are,” he said. In his speech, Weiss noted the need for women’s presence in Orthodox leadership positions, noting the constant demand from synagogues, Hillels, and other organizations as proof. All three graduates, he stressed, have secured jobs.

“This is a moment of kiddusha, a moment of real holiness,” Weiss added, asking the audience to participate in a blessing of the graduates. The sheer volume of the chanting was a testament to how eager people were to help celebrate this event.

Hurwitz was elated. “It was so beautiful,” Hurwitz told the Forward during the reception. “I’m so happy that I’m no longer alone.”

Despite the strong sense of female empowerment that reigned throughout the day, Kohl Finegold also acknowledged the men in the room. “There is a group of unsung heroes. These are the men who stand aside and support us. These are the male allies,” she said, giving special thanks to Rabbi Adam Scheier, whose congregation, Shaar Hashomayim, she will be joining as the Director of Education and Spiritual Enrichment.

She also thanked her husband Avi, who had flown in that very morning with their two-week-old daughter. “Everything that I am is yours too,” she said.

Avi Finegold wasn’t the only one to make a risky last-minute trip. Adam Scheier, whose wife Abby was among the graduates, drove through the night from Montreal with his four young daughters in tow to make it.

Once the opening remarks concluded, two current students unfolded a banner propped on poles, which served as a symbolic threshold for the graduates to step under after receiving their ordination from Weiss and Rabbi Daniel Sperber, a member of the rabbinical advisory board.

Despite this pushback from many in the Orthodox community, or maybe because of it, there was a sense of great solidarity among those who had made it. People from across denominations came to show their support, including Rabbi David Ellenson, President of Hebrew Union College, his wife, Rabbi Jacqueline Koch Ellenson, president of the Women’s Rabbinic Network, and Rabbi Sally J. Priesand, who became America’s first ordained female rabbi in 1972.

Rabbi Dov Linzer, dean of the progressive Orthodox school Yeshivat Chovevei Torah, was also in attendance. “[The ceremony] was tremendously inspiring,” he told the Forward. “You could feel the support. The turnout — which was larger than I think anyone expected — really represents the support that this has in the community.”

Rabbi Jason Herman, executive director of the International Rabbinic Fellowship, the only Orthodox organization to put out a statement of support of the ordination of women as maharats, noted that this graduation represented the beginning of a new way of looking at women in leadership positions in the Orthodox world. At the very least, he added, it is “one very important step in that shift.”

This sense of community was present throughout the occasion. Hurwitz, beaming at the crowd and visibly moved, concluded the ceremony by congratulating the graduates once again, and encouraging them to move forward. “May you keep walking even when others become stagnant,” she said. “Walk boldly with courage and pride, and walk humbly remembering those who have come before you. [And] know that as you march forward, we, all of us, the entire community, walks with you.”