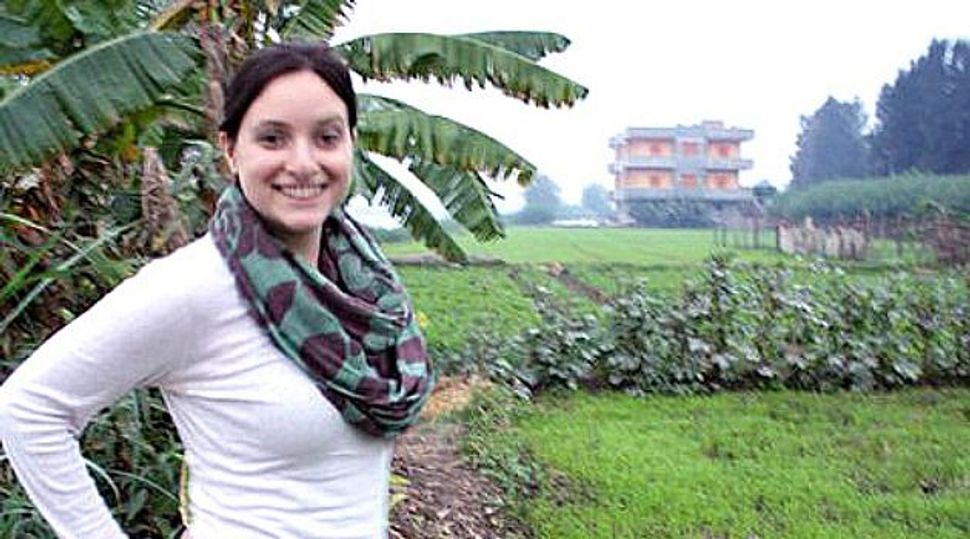 Building Bridges: Monica Kamen says Egyptians were eager to learn about her faith. Jewish friends back home were less understanding about why she went to a Muslim country in the first place. Image by courtesy of kamen family

The circumstances of Andrew Driscoll Pochter’s death were just emerging when the questions began: What was a Jewish boy doing in Egypt? How could he have been naive enough to get involved in a protest? Why wasn’t he in Israel instead?

Pochter, raised in a Jewish home in Chevy Chase, Md., active in Hillel at Kenyon College and proud of his identity, was stabbed to death June 28 at a violent protest in Alexandria, Egypt. As the first American victim of the uprising against Mohammed Morsi’s government, Pochter became an instant symbol of the many students who choose to live and work in the Middle East to improve their Arabic skills and further their understanding of the region.

But there is an inherent dilemma faced by Jewish students fascinated by the Middle East and its culture and language: they must grapple with their Jewish identity, often keeping it hidden once they arrive in their host countries. For their parents, the desire to see their children take the lead in understanding the countries in Israel’s neighborhood clashes with the ultimate realization that they aren’t completely comfortable with it.

Interviews with several Jewish families reveal that, for both generations, Pochter’s sudden and brutal death hit a little too close to home.

Monica Kamen grew up in a Conservative Jewish family, attended Jewish day school near Philadelphia and spent a semester in Israel during high school. It was there that she first became fascinated with the Middle East. In 2009 she spent a summer in Egypt; she returned for the academic year in September 2010. When the uprising began, on January 24, 2011, she found herself smack in the middle of revolutionary protests in Alexandria.

Her father, initially supportive of her decision to study in Egypt, was frantic. “What would happen to this American Jewish girl if she was arrested?” Barnett Kamen remembered thinking. “There would be no recourse if she just sat in jail.”

“It’s important for everybody to know that they don’t have any rights over there,” the elder Kamen said, adding that organizations who offer these opportunities need to take stricter measures to make sure that participants are prepared before leaving, and that contingency plans are in place in case of emergencies. “I have no problem with Jews going to Arab countries on programs, I just want to make sure that the programs know what they’re doing,” he noted.

Nathan Brown, professor of political science and international affairs at George Washington University, spent years studying in the Middle East. A Jew himself, Brown first arrived in Egypt in 1983 as a fellow for the Center for Arabic Study Abroad, a program that offers advanced study in Arabic to American students in Cairo. He has returned often.

For him, Jews aren’t any more at risk than they were when he first set foot in the country, 30 years ago. What has changed, he explains, is the breakdown in political authority and the volatile security situation. “If I were a student, I would be a little worried,” he said.

For those who have recently returned from the region, the recurring reaction to Pochter’s death is, “It could have been me.”

“It was bizarre, because he reminded me so much of myself,” one recent alumnus of CASA said. “A lot of the details of his life were similar to mine: We’re both Jewish, from a similar area, went to a similar type school and wanted to go to an Arab country to promote peace.”

Because he plans on returning to the Middle East, this person asked that his identity remain anonymous. Most people in Egypt do not know that he is Jewish.

As a Jew living in Egypt, he was struck by the stark contrast between general attitudes perpetuated by ignorance and stereotype, and incredible warmth and hospitality at an interpersonal level. Nevertheless, being Jewish, he explained, is not something that you discuss in public.

“I lied about being Jewish all of the time,” he said. “In taxis, cab drivers would often ask if you were Muslim or Christian. From those two options, I just chose Christian. I was never worried about physical violence or anything like that, but there was no reason to tell anyone. There was a possibility of rumor spreading.”

But he was also quick to point out that it would be a mistake to believe that Jews are in a perpetual state of physical danger. The situation is much more complicated than that.

“It’s a lot more nuanced than most people think,” he explained. “This incident [Pochter’s death] is an exception. While it’s not good to tell people you’re Jewish, it’s very rare that there will be a problem like that. Jews are terrified of Egypt in America, and they shouldn’t [be].”

His mother, who came to visit while he was living in Cairo, agreed. Though she didn’t feel comfortable broadcasting her Jewish identity, neither did she feel threatened.

“We had a wonderful time, and the people were wonderful. You understand [them] better,” she said. “Jewish kids need to be exposed to other cultures, not just Jewish culture.”

The mother of another student currently pursuing his graduate studies at the American University in Cairo was not so enthused. While visiting her son in Egypt this past year, she felt like a visible minority, not just as a Jew, but also as an American.

“I felt uncomfortable the whole time I was there,” she admitted in a telephone interview. But despite her initial reluctance, she also noticed the duality of attitudes described by others. While she was visiting a synagogue in Alexandria, the Muslim caretakers in charge of the building’s upkeep were more than happy to show her around.

“[They were] proud of the work they were doing to keep these Jewish relics in good shape, and have them be open to the public and show them off,” she said. “There are people in Egypt who do remember [the Jews of Egypt] fondly.”

Stereotypes about Jews, Brown explained, stem largely from a lack of differentiation between American Jews and Israel, rather than from any kind of targeted hatred. General attitudes toward Jews can be off-putting and insulting, but personal reactions are often surprising.

“In Egypt there is a weird contradiction between really horrendous attitudes and really welcoming people,” he said.

To illustrate his point, Brown recalled an incident that took place in 1985, toward the end of his first stay in the country. At a dinner held by one of his Egyptian friends, someone made a negative comment about Israel after seeing a newspaper headline.

“America will do anything for Israel,” Brown remembers the person saying. After debating whether or not to say anything, because “you’ve got to be careful,” Brown revealed that he was in fact Jewish.

The man’s reaction stunned him.

“Oh, that’s so interesting, I’ve never met a Jew before,” he recalled him saying. “When can you come for dinner?”

Jews who have recently returned from Egypt tell of similar experiences. Though Monica Kamen remembers struggling through textbooks full of passing references to Jewish world dominance and Western puppets, she remains overwhelmingly positive about her stay in the country.

“This [was] one of the best and most formative experiences of my life,” she said. “It was amazing to have those relationships with Egyptians.”

Far from shunning her, her friends were curious to find out more about Judaism. One of her friends, an Egyptian Muslim, fasted with her on Yom Kippur out of solidarity. When Kamen hosted a Seder on the second night of Passover, two of her professors came with their families.

For Kamen, the biggest challenge was not so much the outward perception of her as a Jew, but rather the way her experience in the Arab world sparked an inner dilemma about her identity as a Jew, and about her perception of Israel. “I grew up learning one narrative about Israel my whole life, and it was really, really challenged,” she explained.

Friends and family who found out she was pursuing Arabic studies often did not understand. “I definitely got a lot of flak for studying Arabic in the first place, and for going over there,” Kamen said. “A lot of my Jewish peers were like, ‘Why are you doing this?’”

But her father sees things differently. “Monica, to me, was an ambassador for the Jewish people in Egypt. I think it’s important for Arabs to meet Jews and get to know them on a personal level,” Barnett Kamen said.

The mother of the graduate student currently in Cairo summed up what seems to be the general feeling for parents: both fiercely proud of their children and increasingly worried.

“I wish it weren’t my son,” she said. “But I do think [that] these are the people that are going to be able to have an understanding of the culture, and [the ones] able to forge peace in the future.”