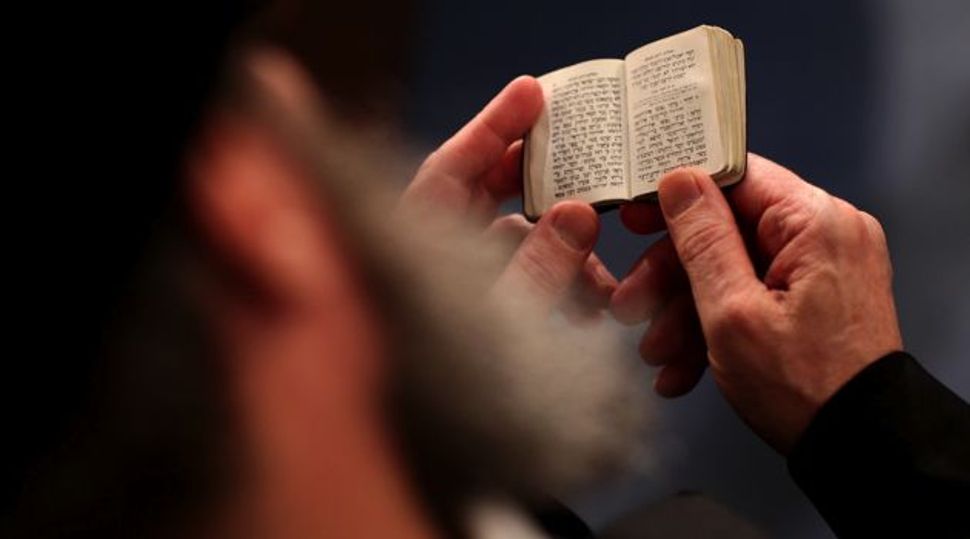 My Israeli-born kids recited Tehillim in kindergarten. Tehillim, the Psalms of David, are background music here in Jerusalem. But they weren’t when I was growing up in mid-20th-century New York. David’s words lived on in my siddur and set to Shlomo Carlebach’s music, but the idea of reciting them on their own, and not during a synagogue service, was completely off my personal radar.

Then on May 15, 1974, terrorists infiltrated a school in the Northern Israeli town of Ma’alot and held 115 school children and their teachers hostage for two days. At my high school, Ramaz, on Manhattan’s Upper East Side, and all through the Jewish world, we followed the story closely.

Ramaz had trained us to be activists. Our instinct, honed at countless rallies, was to take to the streets — to yell, picket, boycott and petition. Suddenly there was nothing for us to do.

Our principal, Rabbi Haskell Lookstein, called the entire student body together. Dressed in tallis and tefillin he sang out Psalm 130, Shir HaMaalot Mimaamakim, the Song of Ascents — “From the depths I call to You, oh G-d” — in the ancient, plaintive melody of his Lithuanian ancestors.

Within two days, the IDF stormed the school and killed the terrorists. But the victory was bittersweet. During the raid, 25 people died, 22 of them children.

But the lesson remained: When life suddenly turns black and there’s no flashlight, a Jew grabs hold of the psalms. David knew that place. He lived in it. Although he did become king of Israel, David’s path to glory was full of difficulty. As a young man, he suffered the rejection of his own family and later the scorn of his wife. His numerous enemies included his father-in-law and his own son Absalom, who rebelled against him. Through all of this, he spun out the luminous verses that we call the Psalms. All of Psalms can be summarized in two short Anne Lamott-style phrases: “help” and “thank you.” In our own period, Natan Sharansky hung onto his psalter through his long years in Soviet prisons.

I wish I could have said that after that day, I began a regular Tehillim practice. But I didn’t. I didn’t even own a psalter. Even though I identified as a religious person, I trusted myself and the power of action. I defined life’s problems in terms of their solutions and in my mind solutions came from professionals: doctors, lawyers, psychologists, accountants, psychiatrists, engineers, “dummies books” and self-help books.

I sailed along that way for a good many years until a crisis involving my child’s education pushed me up against that proverbial wall. None of the so-called experts offered any useful advice. Then, in the midst of it all, a neighbor mentioned a women’s psalms recitation group and I went. It beat the alternative, which was staying home and worrying.

Women’s Tehillim groups aren’t a new thing. They existed in Eastern Europe where a literate woman called a zoggerte chanted the verses and the other less literate women followed along. In modern groups there is no zoggerte. Instead, the psalter’s 150 chapters are split into two dozen skinny pamphlets. Each group member silently recites the verses in her pamphlet and within a half hour (or as little as 15 minutes in a big group) the group gets through all 150 psalms. This assembly-line strategy yields a great windfall; for reading a small booklet each participant receives the spiritual merit of all 150 chapters.

That sounded like a good deal. I could use any merit I could get, any clout with G-d to help my situation, but I can’t say that I enjoyed the group. I missed Rabbi Lookstein’s old-fashioned music. To my ears womens’ whispered chanting sounded like the hum of a massive refrigerator. My tongue stumbled over David’s difficult Hebrew words and my mind drifted away from the text and wandered around the room. I made intimate acquaintace with the mottled peach printed drapes, the spotted vinyl chairs and the white ceramic tiles of the community center room where the Tehillim club met. In those early days, I’d read a few chapters and then skip out ahead of the other members.

It was the group leader who kept me going, a venerable octogenarian who read the introductory and closing prayers at each session. “Ladies,” she’d say, her soft purring voice laced with a slight German accent, “you don’t know what you are doing when you come.”

That sold me. As much as I disavowed action, I had a need to do something about my situation and in the spiritual world psalm saying is an act of immense power. The mystics say that it can lead to hamtakat hadin, the sweetening of harsh decrees, which was probably why Rabbi Lookstein took out his psalter back in 1974.

Things eventually got better — not in a happily-ever-after Disney movie way, but slowly and subtly, the way that a flower blossoms when no one is watching. Just as David kept his eyes open to watch for the proverbial silver lining in a very cloudy life, I tallied up the small but significant milestones in my child’s life. I was a thankful for a day on which the school didn’t call, a day without a fight, a day when I could feel that my blessings outweighed my burdens.

Going to the group got easier, too. Somehow the silence softened and the words unlocked some of their secrets. Sometimes they seemed to come from the deepest places in my own heart, as though David and I were on the same wavelength. “Help me…”; Save me”; “I am poor and needy … I shall not fear.”

Nearly a decade has passed — years filled with children growing up and parents getting older, with birth and death, profit and loss, sickness and recovery, terrorism, wars, engagements, weddings and bar mitzvahs. I’ve stayed the course with psalter in hand. David’s song of surrender has become my background music.

Carol Ungar is a writer and food blogger. She is at work on a cookbook, “Jewish Soul Food,” forthcoming from Brandeis University Press.