Who Are These Singing Twin Sisters? 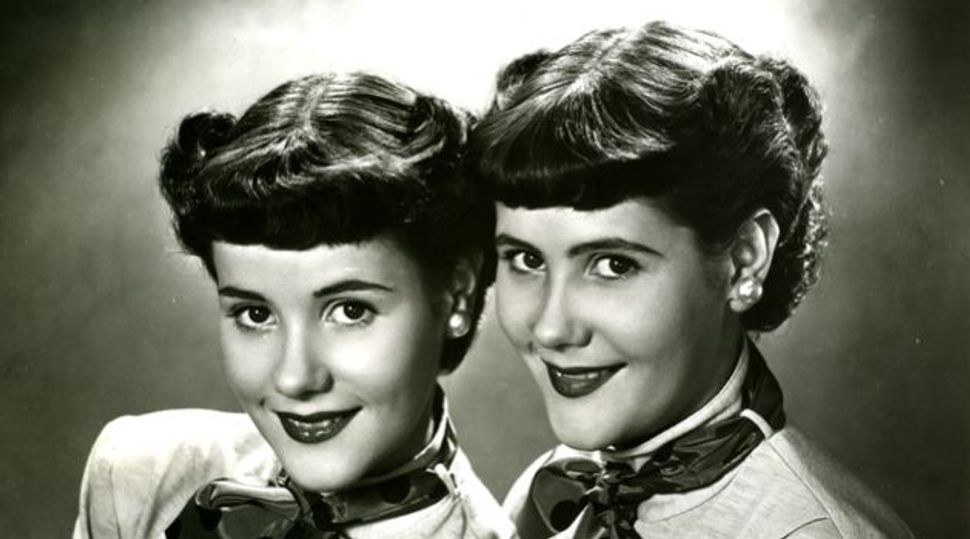 Mystery Girls: Little is known about these twins, who appeared in the Forverts? pages in the 1950s. It?s likely that they were a singing duo trying to capitalize on the success of the Barry Sisters (also known as the Bagelman Sisters). Recognize them? Contact features@forward.com. Image by Forward Association

Forward Looking Back brings you the photos and stories that were making news in the Forward’s Yiddish paper 100, 75 and 50 years ago. Check back each week for a new set of illuminating and edifying clippings from the Jewish past.

“Dopey Benny,” a well-known gangster from Manhattan’s Lower East Side whose real name is Benjamin Fein, is currently sitting in “The Tombs,” a Manhattan detention complex after being arrested for attacking Officer Sheridan of the Clinton Street Police Station. While in prison, Fein requested of the district attorney that he be allowed to make a statement regarding his current incarceration. He thus informed the DA that on the night of his arrest, he was standing on the corner of Forsyth and Grand streets, when Sheridan approached him and told him that he needed to go with him to the Clinton Street Station House. Instead, the officer led Dopey Benny to a dark alley on the Bowery, where a number of other police officers were waiting. Using blackjacks, the officers began to beat the gangster. Following the beating, he was placed in an ambulance and taken straight to jail.

A Palestinian Jewish police officer named Mordechai Schwartz was hanged in the Acre prison after being convicted of murdering an Arab policeman. Last-minute entreaties to British High Commissioner Harold MacMichael to commute the death sentence were refused. Schwartz, who initially pleaded his innocence, was recently said to have admitted to the crime. In other news from the Holy Land, nine Jews — women and children among them — were buried in Haifa, victims of an Arab terror attack who had been killed after their bus was set upon by a gang of about 70 Arab terrorists. British military authorities engaged the gang, killing nine of its members and wounding a number of others.

Algerian radio and television have reported that they have exposed a plot hatched by the State of Israel to overthrow the government of Ahmed Ben Bella. As a result, 20 Algerians and 10 foreigners were arrested in the Grande Kabylie area of Eastern Algeria, all allegedly members of a guerilla attack force. According to Algeria’s information minister, nearly all the foreigners detained in connection with the plot are Israelis who, he claimed, were attempting to halt the Algerian revolution. He added: “President Ben Bella has never hidden his opposition to Israel and has said on a number of occasions that Israel was created by imperialism. For us, there is only Arab Palestine.”

Who Are These Singing Twin Sisters?