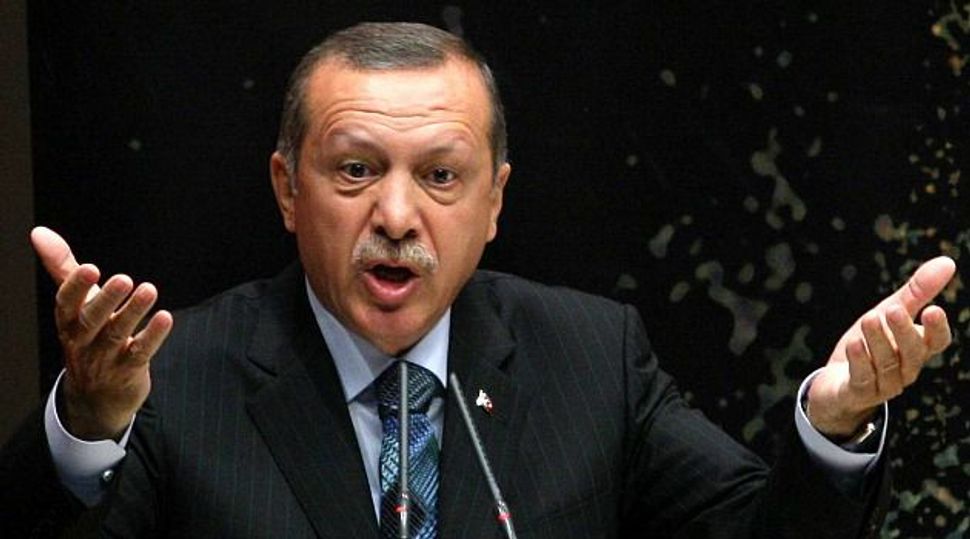 Erdogan, who has become one of the fiercest critics of the Egyptian army’s removal of Mohamed Mursi, told members of his Islamist-rooted AK Party that he had proof that Israel was involved in last month’s ouster, which has been followed by a bloody crackdown on the elected president’s Muslim Brotherhood.

“What do they say in Egypt? Democracy is not the ballot box. What is behind it? Israel. We have in our hands documentation,” Erdogan said in comments broadcast by TRT state television.

In Washington, White House spokesman Josh Earnest said: “We strongly condemn the statements that were made by Prime Minister Erdogan today. Suggesting that Israel is somehow responsible for recent events in Egypt is offensive, unsubstantiated and wrong.”

Erdogan’s AK party traces its roots to an Islamist movement banned at a time when Turkey’s military held great influence and has positioned itself as a model for conservative, democratic politicians in the Middle East moving away from dictatorship.

Erdogan’s support for the Muslim Brotherhood government in Egypt, and a souring of once warm Turkish ties with Israel, had seemed to give Ankara a growing regional influence. The change of rule in Egypt may hinder that, while outspoken defence of Egypt’s Islamists could affect Turkey’s relations with the West.

Turkey, which has a secular constitution, has the second-biggest armed forces in NATO and is a long-standing candidate for European Union membership.

Erdogan’s comments aimed to divide Egyptians, the state news agency MENA quoted ministers as saying: “The cabinet stresses that Egypt’s patience is wearing thin,” it said. “Egypt does not share others’ enmities, and is not about to go in search of a new identity. Its Arab and Islamic nature is obvious.”

Erdogan did not say what documentation he had, but referred to comments he said an Israeli cabinet minister had made before Egyptian parliamentary elections that were held after a popular uprising pushed President Hosni Mubarak from power.

“Before the 2011 elections, during a session in France, the justice minister and an intellectual from France – he’s Jewish too – they used exactly this comment: ‘Even if the Muslim Brotherhood wins the election, they will not win because democracy is not the ballot box’,” Erdogan said.

“That is exactly what happened,” he said, without naming either the minister nor the French intellectual.

He appeared to refer to comments available in an online video from a seminar in mid-2011 involving French philosopher Bernard-Henri Levy and Tzipi Livni, then the leader of Israel’s opposition and now justice minister. Livni has questioned the Brotherhood’s willingness to respect democratic opposition.

A spokeswoman for Livni said of Erdogan’s remarks: “Any attempt to try and tie Israel and Minister Livni to Egypt’s internal affairs is unfounded.”

Turkey’s relations with Israel have soured in recent years and hit a low in May 2010 when Israeli commandos killed nine Turkish activists while storming the Mavi Marmara, a ship in a convoy seeking to break an Israeli naval blockade of Gaza.

At least two senior AK Party officials have suggested there was Jewish involvement in anti-government protests that rocked Turkey in late May and June.

Erdogan repeatedly blamed unnamed foreign interests and an “interest-rate lobby” for those protests, in what he deemed an anti-democratic effort to undo Turkey’s last three elections, in which the AK Party increased its share of the vote each time.

“The West needs to learn the definition of democracy, Erdogan said. “If it cannot … these clashes will carry the world towards a different place. What is that? It will take it towards autocratic regimes. That is our concern.”