Peddler Bound, Gagged and Robbed of $21 in Alphabet City 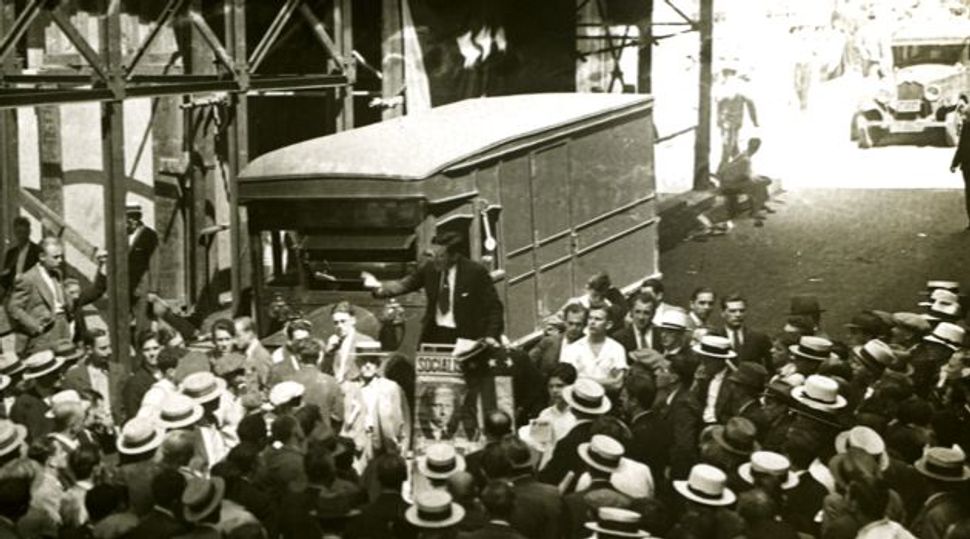 In 1932: Charles Solomon, pictured here giving a stump speech on Wall Street, was one of five socialist New York assemblymen who were kicked out of office during the anti-Communist Red Scare. He was later re-elected and allowed to remain. Image by Forward Association

Jacob Furman, an old clothes peddler who lives on 6th Street and Avenue B in Manhattan, was out on the street, plying his trade, when a man called out from the window of a small hotel on Orchard Street, telling him he had some old clothes to sell. Furman went up to look at the goods, but when he entered the room, the man attacked him and tied him up. The man then lifted $21 dollars out of Furman’s wallet and stole the ring off his finger. He left the room and the hotel, leaving Furman bound and gagged. It took awhile, but Furman eventually loosened the ropes and escaped. He ran to the lobby and told the manager what had happened. The clerk saw the man, who had been registered at the hotel under the name “Phil Duncan,” leave with a suitcase. Police were called, and the clerk and Furman gave descriptions.

In one of the most damaging attacks in recent memory, Arab terrorist have uprooted 600 dunams (150 acres) of fruit trees on a Jewish-owned farm between Ashdod and Rehovot. Ironically, this particular farm employed a fair number of Arab workers, who have now lost their jobs. Other attacks included one on a Jewish policeman, David Gross, who was on foot patrol in Tzfat; a Jewish laborer was wounded near Rehovot when his bus was fired upon by terrorists, and another Jew was wounded when stones were thrown at his taxi in Ramle. The terror has not been limited to Jews: An Arab band attacked an Arab police inspector in Bethlehem, and another group of armed Arabs robbed a customs office in Jaffa at gunpoint. In a related matter, sources indicate that a portion of the funding for Arab terror in Palestine comes from the fascist governments of Germany and Italy.

The Israeli government condemned attacks made by ultra-Orthodox yeshiva students on Catholic schools in Jaffa, Jerusalem and Haifa. Demonstrations against the schools, which are viewed by the fanatically religious Jews as hotbeds of missionary activity aimed at converting Jews to Christianity, were well organized. Hundreds of yeshiva students marched to the schools, carrying signs and singing religious hymns. In Jaffa, the demonstration got out of hand; yeshiva boys broke into the school’s office and smashed the furniture. The students were also accused of insulting the archbishop. Hundreds of yeshiva students were arrested in the melee, and French and British diplomats made official complaints about the demonstrations to the Israeli Foreign Ministry.

Peddler Bound, Gagged and Robbed of $21 in Alphabet City