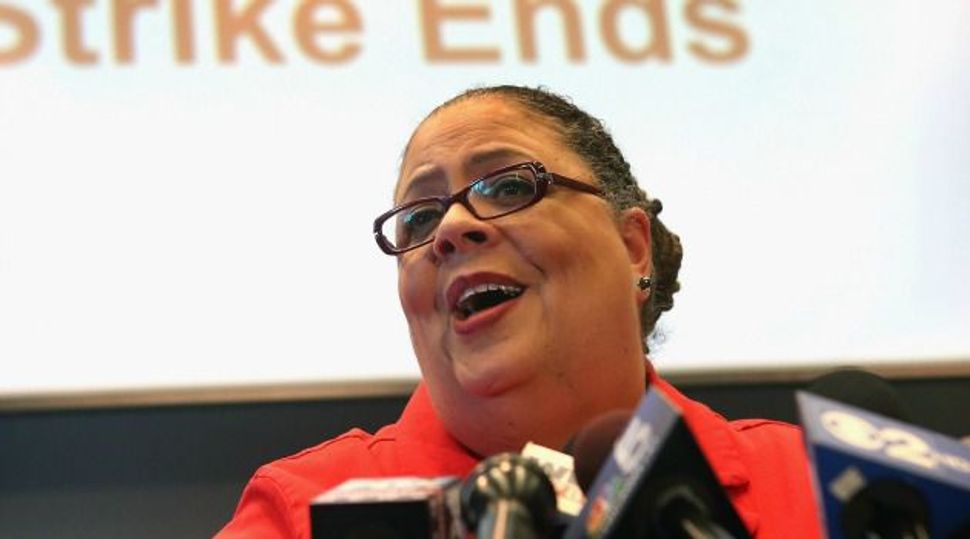 Last Halloween, 17-year-old Eleanor Glockner threw a red wool jacket over an old black dress of her mom’s. She dyed her hair gray, pinned it into a bun and stuck a homemade Chicago Teachers Union button on her lapel before marching down the street to trick-or-treat at the home of her neighbor, Mayor Rahm Emanuel.

“I was curious to see how he would react,” the Northside College Prep High School senior said mischievously, referring to her impersonation of CTU President Karen Lewis.

Disappointingly for her, rather than the mayor, a bowl of candies on a chair greeted sweets-seekers near the sidewalk in front of Emanuel’s home. But the plainclothes police officer guarding his home laughed and told Glockner he would tell the mayor about it.

Emanuel — a favorite son of Jewish organizations, such as American Israel Public Affairs Committee and Chicago’s Jewish United Fund — and Lewis, an African American who converted to Judaism two decades ago, may share a religious faith. But the clash of these two powerful personalities over the future of public education has seeped deep into Chicago’s consciousness as the two have brawled bitterly over what is, for many Jews, a key Jewish and public value.

Among the high (or low) points, according to Lewis, was a meeting between the two in the fall of 2011 when, Lewis reported, Emanuel “exploded” at her, pointed his finger, and screamed, “F— you, Lewis!” The famously salty-tongued Emanuel declined to confirm or deny Lewis’ account, but told the Chicago Sun-Times: “To tell the truth, she hugged me at the end of the meeting.”

For her part, some of Lewis’ attacks on Emanuel and his education reform program, led by wealthy philanthropists such as local billionaire Penny Pritzker, have been incendiary. Alluding to the reformers’ focus on closing unionized public schools that have performed poorly and replacing them with non-union charter schools, Lewis railed, “When did all these venture capitalists become so interested in the lives of minority students in the first place? There’s something about these folks who love the kids but hate their parents. There’s something about these folks who use little black and brown children as stage props at one press conference while announcing they want to fire, layoff or lock up their parents at another press conference.”

Asked if the city schools should boost property taxes, Lewis said, “Yes. If you look at a majority of the tax base for property taxes in Chicago, they’re mostly white, who don’t have a real interest in paying for the education of poor black and brown children. We don’t want to say that out loud.”

Last month, the Sun-Times referred to Lewis and Emanuel as an “eraser set, involved in a real dust-up.”

In an August 28 phone interview with the Forward, Lewis, who was elected as CTU president in 2010, the year before Emanuel took office, said she thinks that she and the mayor actually share a lot in common. But the two have never discussed Jewish approaches to education. “I’ve only had two conversations with him, and those were over two years ago,” she said.

The last of those conversations — the one that allegedly featured Emanuel’s explosive curse-out of Lewis — capped what the union leader sees as a trail of abuses suffered by rank-and-file teachers, who are being blamed for broader systemic failures. This includes a unilateral decision by the Emanuel-appointed school board to rescind the 4% raises that teachers were scheduled to receive, and a bill Emanuel helped ram through the state legislature that stripped senior teachers of protections against firing. The state bill also enabled Emanuel to unilaterally lengthen Chicago’s notably short school day and linked teacher tenure to performance reviews. Lewis believes those reviews fail to take into sufficient account problems such as poverty, violence and malnutrition in many of the low-performing schools.

Above and beyond this, Emanuel has made clear his determination to make Chicago a center for the sort of school reforms being pushed by moneyed reformers such as Bill Gates and Pritzker, whom Emanuel appointed to the city’s school board soon after taking office. Those reforms emphasize closing low-performing public schools and expanding the role of non-union charter schools which, unlike the public schools they are competing with, are not required to serve children who don’t speak English or who have behavioral problems.

For all this, no one argues that Chicago schools do not need some radical reforms. By summer 2013, nearly 35% of Chicago’s public high-school students failed to graduate within five years, according to a CPS release (though this was down from 40% just two years earlier) and students’ ACT scores averaged a low 17.62 (that’s out of 36 points; many colleges look for a score in the low 20s at least). Some critics also saw Emanuel’s rescinding of teacher wages as more than justified by the huge deficits and unfunded pension obligations faced by the city.

Still, questions persist as to whether the push for non-union charter schools offers a real answer. Chicago currently has 119 charter schools with plans for many more in the coming years. But a 2009 analysis by the Chicago Tribune showed that standardized test scores at a raft of new specialized schools and charter schools opened by the city since 2001 under its “Renaissance 2010” program were nearly identical to the overall average at Chicago public schools. At the Renaissance 2010 high schools, the scores were below the average.

Emanuel’s office failed to respond to multiple requests for comment about his relationship with Lewis, left via email and phone. But the clash between the 60-year-old union leader and 53-year-old mayor over how Chicago’s public schools ought to be run has transfixed this city, where politics is played as a contact sport. Last September, Lewis led a strike, which shut down the nation’s third-largest public school system, after the union and the mayor’s office couldn’t reach an agreement on areas such as teacher evaluation. The strike, Chicago’s first since 1987, temporarily displaced about 350,000 students and lasted longer than a week.

Sophie Leff, a senior and classmate of Glockner’s at Northside College Prep, was one of those students. In an op-ed on the Jewish Council on Urban Affairs’ website last September, Leff described picketing her school with teachers and classmates as “an inspirational and moving experience that at several points nearly brought me to tears.”

In an interview with the Forward, Leff said Lewis has faced “a lot of backlash” not only because she is a powerful woman, but also “a very loud, very outspoken, and very abrasive woman in a position of power.” Lewis also “doesn’t present very well,” Leff said. “I wonder if she looked like Ann Coulter, would the reaction to her be different?”

But criticism of Lewis and the CTU is not hard to find among Jewish parents.

Rabbi Brant Rosen, who leads the Jewish Reconstructionist Congregation in nearby Evanston, faced pushback after writing a blog post supportive of Lewis. One comment, from “Concerned parent” called her a “bully” and “not a good example of the Torah at all.”

Lewis, who told the Forward that she eagerly anticipates the new beginning and the time for reevaluating spiritual goals that the High Holidays present, says her study of Jewish texts informs her work. “They’re not separate at all,” she said. “There’s this notion all through the Torah about social justice,” she said, though she noted the Torah has some “stuff that’s pretty scary” too.

When she read the Torah section at her adult bat mitzvah recently, the story — about the spies sent into Canaan by Moses as the Israelites approached the Holy Land — was “basically about these guys preparing the way to massacre a whole bunch of people,” she said. “There’s all of these really interesting contradictions and notions of what justice looks like.”

Lewis decided to convert to Judaism after experiencing Kol Nidre services at Congregation Rodfei Zedek in Chicago’s Hyde Park neighborhood, where she grew up. By the time her formal conversion took place in 1993, she was 39. “You look for something spiritual,” she said, adding that that she enjoyed the “spectacle” of Kol Nidre. “I like a bit of pomp and circumstance,” she said. Lewis remains a member at Rodfei Zedek, a Conservative synagogue, and is “pretty much there every Shabbat service.”

“I was telling somebody at kiddush a couple of weeks ago that I’m addicted to shul,” she said. “It’s the one thing that I’m actually angry about if I have to miss it.”

Her schedule won’t allow her to take regular Hebrew classes, but she can read well enough to follow along with the weekly Torah reading, although she doesn’t understand the Hebrew words she is reading. She’d like to learn more about the language and its grammar, she added, and that emphasis on study is part of what attracted her to Judaism.

“You can have a variety of different ways of looking at something, and it’s all considered valuable if you make your point in the text,” she said. “That’s a very rich, intellectual tradition for me. I’m such a geek that it just speaks to me on that level.”

At the synagogue, Lewis appreciates that the congregation is made up of people “with every different political stripe that you can imagine.” She noted that Elliot Gertel, Rodfei Zedek’s former rabbi, under whom she converted, was very conservative politically. Members, she said, know not to accost her on Shabbat with advice or criticism of her work. (Sometimes non-members are less considerate, she added.)

To Rosen, Emanuel and Lewis represent “two very different Jewish responses and different Jewish role models.” The former represents the “power elite” and partners with corporate interests, while Lewis personifies the “venerable Jewish tradition” — dating back to Moses in Pharaoh’s palace — “of speaking truth to power,” Rosen said. “To me, she embodies what I believe to be the best about prophetic Judaism.”

Rosen invited Lewis to address his Evanston synagogue in April and encouraged her to use the talk as a test run for her upcoming bat mitzvah speech. In an interview with Chicago Magazine, Lewis said she saw the Torah portion, Shelach — in which Joshua and Caleb break ranks with the other spies who say that conquering Canaan is impossible — through the lens of her fight for teachers.

“It’s a perfect portion for me,” she said. “It’s about people being told they can’t do something, and they were able to.”