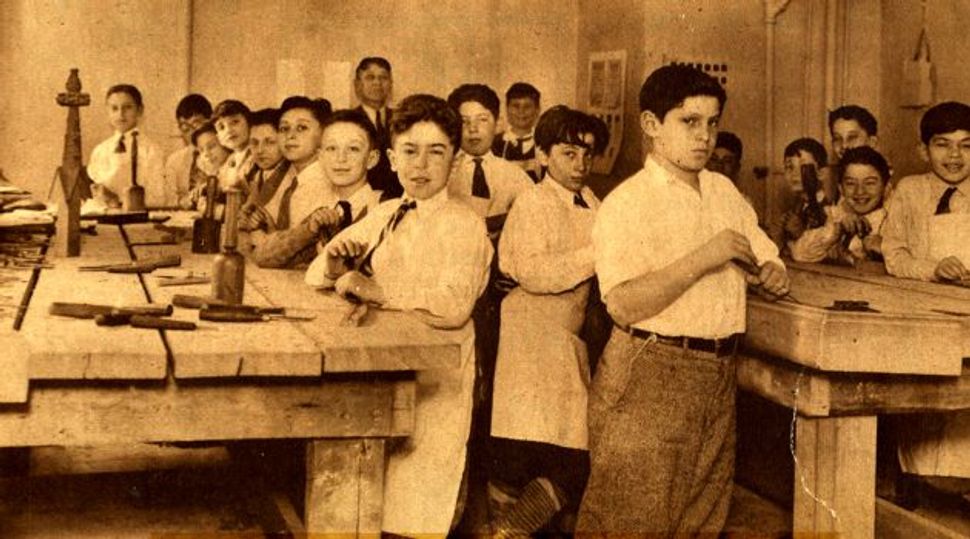 1930s: Boys at the Amalgamated Cooperative Houses, an affordable housing facility in the Bronx, N.Y., take part in a wood carving class. Image by Forward Association

Isaac Tenenbaum, a resident of Vineland, N.J. who immigrated to the United States 19 years ago, has been happily married for 17 years and has four children. All was well and good until the wife he left 19 years ago, in Berditchev, in Eastern Europe, showed up at his doorstep with their son and the police, who arrested Tenenbaum on bigamy charges. It appears that four years ago, Tenenbaum’s son arrived in America and looked up his father. When he visited, his father’s second wife was introduced to him as a “cousin,” but the boy figured out the reality of the situation and, with the help of his sister in Chicago, brought his mother from Berditchev. Before the court, Tenenbaum claimed to have sent his first wife a get, a Jewish divorce document, but she said it never happened. The gentile judge wasn’t sure how to handle the situation, so he came up with the novel idea of creating a five-member Jewish arbitration panel, which concluded that, because Tenenbaum has young children with his second wife, he should remain with her, but he must give his first wife $300 and a get.

Sudeten Jews on the Run

As the Nazis prepare to take over the Czechoslovakian Sudetenland, Jews living in the area, including a number who already escaped Germany or Austria, are on the run. Also fleeing are a fair number of German and Austrian socialists who thought that Czechoslovakia would be a safe haven, as well as Sudeten Czechs, a minority in the area. Thousands of refugees are making their way to Prague and to points farther into Czechoslovakia. In the meantime, Czechoslovakian diplomats are hoping that France and England will come to their aid.

Barry Goldwater Proud To Be a Jew

In a television interview in mid-September, Arizona senator Barry Goldwater said he is proud of his Jewish origins. Goldwater said that his political opponents have frequently attempted to bring up his “Jewishness” to deleterious effect, but the result has always turned out to be the opposite: He wound up getting more votes because of the Jewish factor. “On the one hand, it helps me. And, on the other, I’m proud of my Jewish origins,” he said.