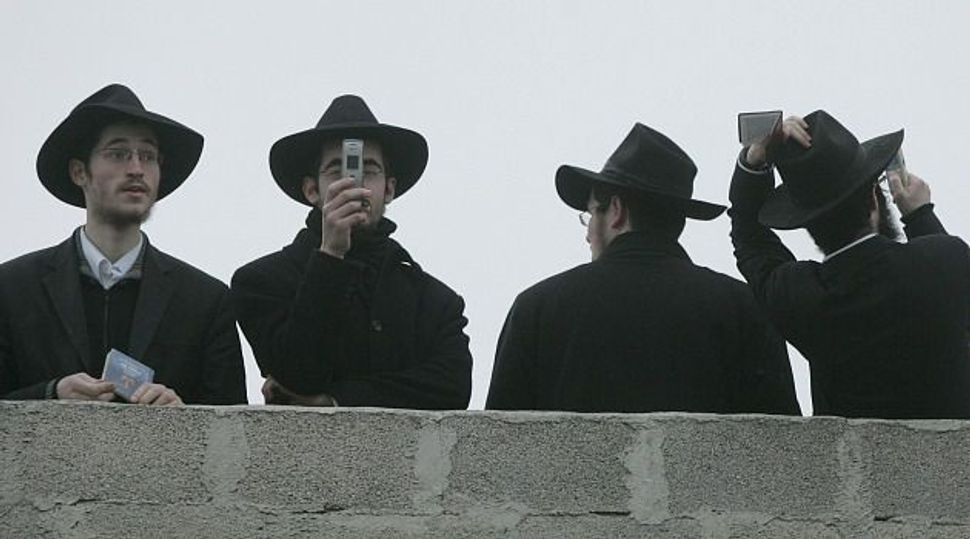 Not Too Smart: New rabbi-approved ?kosher? phones are being marketed to ultra-Orthodox Israelis. They are like their high-tech treyf cousins, but disabled to avoid the internet or even phone calls. Image by getty images

The taboo among the ultra-Orthodox in Israel about using smart phones is no longer, with the launch of models deemed appropriate for the devout.

That’s a real milestone for Haredi leaders, who have denounced the technology as a new form of evil. Last year the renowned rabbi Chaim Kanievsky declared the destructive capacity of smart phones to that of weapons, and another rabbi, Lior Glazer, publicly smashed one.

But on October 22, the cell phone company Rami Levy Communications will start selling niche Haredi smart phones, complete with a certificate stating that a rabbi has inspected the technology.

So how does a smart phone cross from treyf to kosher? It has to be de-smarted.

The Haredi objection to smart phones is that they allow free access to the internet, putting all aspects of secular thought, culture and media, as well as sexual content like pornography, at the fingertips of the observant.

“We get new cell phones in the shrink wrap, open them, and modify them,” Rami Levy Communications’ manager Shlomi Gulian told the Forward. The alteration completely disables web browsing. It is, Gulian stressed, irreversible.

And which model of telephone is his company modifying? “We’re selling the Google Phone — without Google,” he revealed.
The LG Nexus 4 is widely known as the Google Phone because it was developed by the internet services giant and configured especially to showcase its products, including its search engine — all of which are deactivated by Rami Levy.

Though there’s no web browsing, the neutered Nexus allows users to do far more than the existing “kosher phones” which only allow communication by voice calls. Users can send and receive text messages and emails, and use apps.

The phones have access to a special application store that contains only applications that Rami Levy’s rabbinic advisors have deemed appropriate. Digital banking, satellite navigation, interfaces for booking health appointments and Haredi-style religious reading are in; secular news and most other general content is out. There are currently 600 approved apps, and the company hopes to increase that eventually to 20,000.

Gulian said that his company launched the phones because in today’s business environment it is becoming increasingly hard for Haredi professionals and businesspeople to manage without connectivity on the go and without SMS messages.

He said it also did so to rectify the situation wherein Haredi consumers “pay more and receive less” — because when they buy voice-only phones they also then need to purchase extra devices like a GPS units instead of being able to use the apps their phones would otherwise have.

The phones retail at $450 or $530 depending on the size of the memory — less than most other smart phones in Israel. But the general public can’t take advantage of them.

To apply for one, you have to complete a form outlining your reasons for needing a smart phone, and secure the approval of your rabbi, whose name and phone number must be written down so that the company’s supervising rabbis can decide whether they think that you can be trusted to use it responsibly. They accept work-related reasons, but not requests for recreational — or what they deem frivolous — use. They decline applications from young yeshiva students who are meant to be focused on their religious studies but do consider older applicants.

But despite all the precautions, it’s a cutthroat market out there, and the Rami Levy cells face competition from phones that boast even less perks.

Nativ is a company that specializes in Haredi communications, and it has just launched a less smart, and hence more kosher, smart phone.

Its “Mugan” — which means “protected” — is an LG Optimus L7 II that has all the limitations of the Rami Levy phone, including the acceptance procedure and vetted applications store, plus it has been stripped of the ability to make and receive calls. This is apparently an attempt to limit their use to work hours and other times when they are essential.

The “Mugan” doesn’t just boast less capabilities, it has more prestigious rabbinic backing. Rami Levy hasn’t yet revealed its rabbinic credentials, but whoever it has recruited won’t rival its competitor’s. The “Mugan” is approved by none other than the leader of the battle against smart phones — The Rabbinic Committee for Matters of Communications.

The committee operates under a group of Haredi rabbis that includes Ashkenazi leaders like Aharon Leib Shteinman and Shmuel Wosner, as well as the revered Sephardi cleric Ovadia Yosef. And even with that supervision the “Mugan” is $2 cheaper than the more basic Rami Levy phone.

A spokesman for the Rabbinic Committee, Rafael Meir, was disparaging of Rami Levy’s phone during a conversation with the Forward, saying that it has “no kashrut”: “Even if they bring a rabbi [giving approval], it needs to be approved by the Committee, not a rabbi from the fringes.”

Haredi rabbis argue that they haven’t capitulated to the technology they previously shunned. Baruch Shapira, a rabbi who was close to the late Yosef Shalom Elyashiv, the most respected Ashkenazi Haredi rabbi of recent years, said that he regards the launch of new kosher phones as a tool in the battle against the mainstream smart phone.

Shapira — who regards only the “Mugan” as kosher — said that its launch will weaken the attraction of iPhones and the like, by offering a kosher alternative to these “totally prohibited” devices.

But while Shapira presented these modified smart phones as an example of rabbis innovating to shape their community, researcher Amiram Golan sees it differently.

Golan, academic head of the new Center for the Study of Ultra-Orthodox Society at the Jerusalem Institute for Israel Studies, said that he thinks that the general Haredi public has pushed the rabbinic leadership to accept smart phones by failing to fully observe their ban. He said of the rabbis: “They are very practical. They know that you cannot have curbing rules on a public that cannot withstand them. And more and more people close to the rabbis understand this situation.”