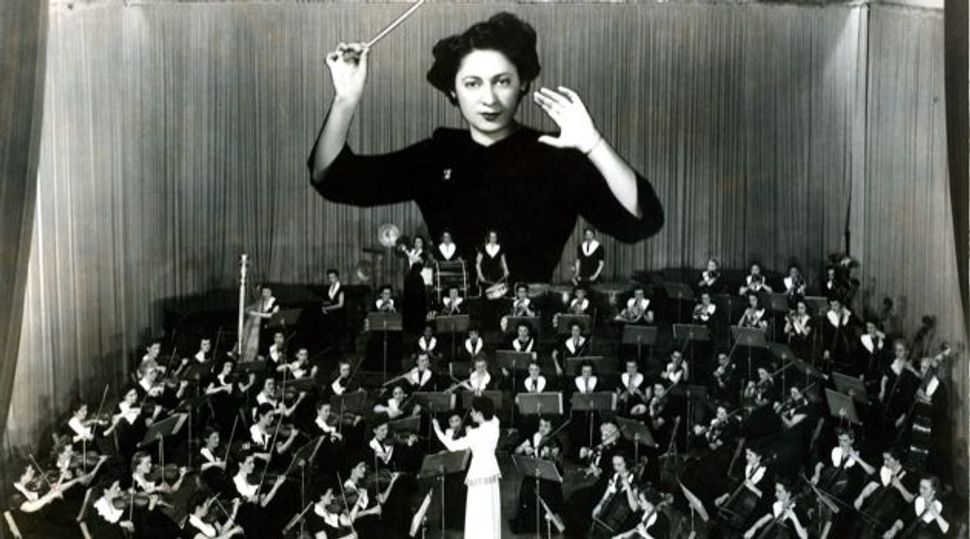 1947: Ethel Stark, featured here in a publicity image, was the founder of the Montreal Women?s Symphony Orchestra. The MWSO was the first Canadian group to perform at Carnegie Hall and one of its clarinetists, Violet Grant States, was the first black female musician to play the prestigious venue. Image by Forward Association

One of the world’s most beloved Yiddish poets, Elyokem Tsunzer, has died at the age of 77. Renowned for his folksy poems, many of which were set to music and sung by millions of Jews, Tsunzer passed after laying ill for two weeks. On his deathbed, he complained that his children had hired the best doctors to prolong his life. “Nu,” he said, “there’s no need — it’s time to go.” His songs, which were sung by religious and secular Jews alike, often contained moralistic messages and even occasionally attacked Jews who were willing to exploit their own people for monetary gain. Tsunzer began his career as a wedding jester, a role he played even after he became famous. It was considered an enormous privilege to have him perform at a wedding. He wrote more than 600 poems, most of which were set to music he also wrote.

As dozens of Jews sat in the small Bronx park at the corner of Westchester and Howe Streets discussing the imminent outbreak of war and the terror that Hitler was wreaking in Europe, a 41-year-old Bronx waiter named Louis Kamin walked up and interrupted the discussion by saying that he had heard the German führer’s latest speech on the radio and that Hitler and the Nazis were right. This comment was all it took for the park’s denizens to grab Kamin, who is also a Jew, and begin beating him. When the police showed up, they arrested Kamin for disorderly conduct and brought him to the Bronx magistrate. He claimed that he had “lost his head” when he praised Hitler, but this didn’t help him out in court: The judge sentenced him to 10 days in jail.

The Synagogue Council of America, an organization that maintains branches from all three major denominations — Reform, Conservative and Orthodox — has requested that this year’s Yom Kippur liturgy include prayers for the Jews of the Soviet Union. The announcement was sent out to more than 3,000 rabbis across America, asking them to make mention of the situation of Soviet Jewry in their sermons. Soviet Jews, the council says, are oppressed, not given the same religious rights as other groups in the USSR and in danger of disintegrating. The council also raised the idea of creating a special organization to help save Soviet Jewish citizens from forced assimilation.