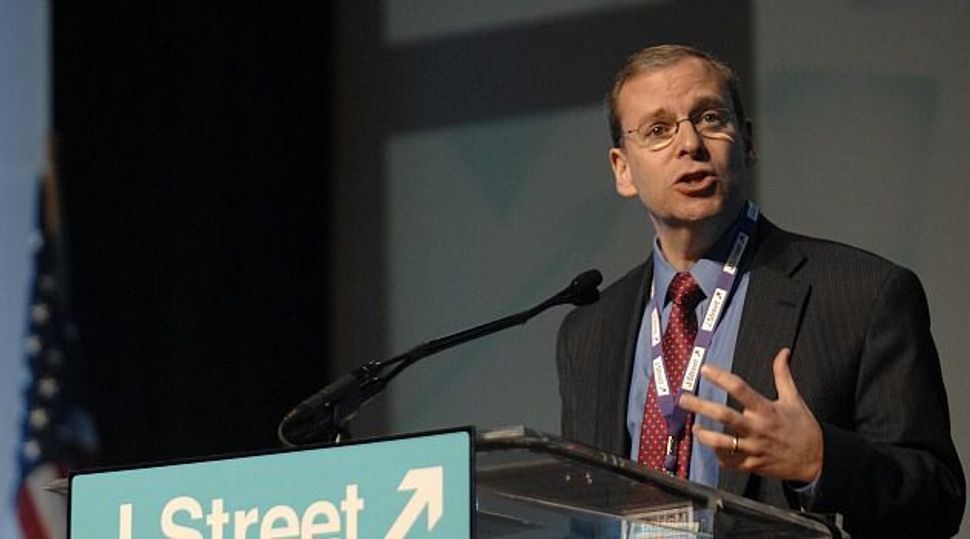 (JTA) — The story that this year’s J Street conference schedule tells is, typically enough, about getting Israel and the Palestinians to a two-state solution.

Between the lines is another narrative as urgent as peacekeeping to the liberal pro-Israel group: getting J Street into the establishment.

The second objective received a major boost earlier this month with the announcement that Vice President Joe Biden would headline the conference, which begins Saturday.

The first vice presidential appearance at a J Street event will be supplemented by a handful of other first appearances: a top Israeli government minister, representatives of the hard-line Israeli parties Likud and Shas, and the president of the Jewish Council for Public Affairs, the national Jewish community’s umbrella body.

The conference, titled “Our Time to Lead,” could be read as J Street’s aspiration to community leadership as much as an urgent call for American involvement in advancing the peace process.

“All across the country we’re making progress in getting representation on JCRCs,” Jeremy Ben-Ami, J Street’s founder and director, told JTA, referring to the Jewish community relations councils that operate in most American Jewish communities.

“We’ve done several hundred events at Jewish communal institutions. Our rabbinic cabinet is over 700. There is a growing understanding that this is a very important part of the American Jewish landscape, that we have a very important seat at the table,” he said.

Ben-Ami is unabashed in describing how he has striven for establishment acceptance. He noted that J Street, having passed its fifth birthday, is now eligible for the ultimate imprimatur of Jewish establishment credentials: membership in the Conference of Presidents of Major American Jewish Organizations.

The Presidents Conference, the main communal umbrella group on foreign policy issues, confirmed that J Street had submitted a formal application but would not comment further, citing the confidentiality of the process.

Ronald Halber, who directs the Greater Washington JCRC, said J Street’s arrival was more a function of its longevity than communal acceptance of its position.

“If you’ve been around a while, you start making friends and relationships,” he said. “The more you’ve become an established fact, the more you’re a player.”

Still, J Street remains vulnerable, as it has been since its founding, to charges that it is not in step with the broad communal consensus on Israel.

Lee Smith, writing in the online Jewish magazine Tablet, fumed that J Street had pulled “a Putin on Obama” in its refusal – virtually alone among Jewish groups – to back President Obama’s request for congressional authorization for a strike on Syria following an alleged chemical weapons attack by the regime of President Bashar Assad.

Though it has dominated Middle East headlines for the past month, Syria does not feature at all on the J Street schedule. Iran, with nuclear ambitions seen by Jerusalem as a more pressing existential threat than the conflict with the Palestinians, merits a single session.

Ben-Ami said J Street was taking its cue from a U.S. administration that has placed a premium on keeping the Israeli-Palestinian talks going.

“The real core mission of J Street is to demonstrate that a lot of people who care deeply about Israel strongly support what the president and the secretary of state have laid out this year,” he said.

Even those establishment figures who laud J Street’s new prominence acknowledge that its first five years have been anything but smooth.

Rabbi David Saperstein, who directs the Reform movement’s Religious Action Center, recalled some significant bumps: J Street’s attempt at even-handedness during the 2009 Gaza War and its refusal to take a position on a U.N. Security Council resolution in 2011 that would have condemned Israel’s settlement practices.

Both postures were roundly repudiated by the Jewish establishment. Rabbi Eric Yoffie, then president of the Union for Reform Judaism, berated the group at its 2009 conference for its Gaza position.

“It has been more strongly messaged in recent years on moving the peace process forward,” Saperstein said of J Street. “It has been targeted in the key messages it’s put out, focusing with clarity on the peace process. For the significant majority of American Jews who remain committed to the peace process as indispensable to Israel’s well-being, it has become a go-to entity for people who wanted to make a difference.”

One key to J Street’s acceptance, said the JCPA’s Rabbi Steve Gutow, has been its role in pushing back against the boycott, divestment and sanctions movement, particularly against mainline Christian churches.

“Three years ago at the Presbyterian convention, [J Street Senior Vice President] Rachel Lerner came in literally at the last minute and gave a remarkable speech about why delegitimization was wrong,” Gutow said.

One of the church’s publications had just praised J Street as an emerging new voice in the Jewish community. The divestment bid was defeated.

Ben-Ami said his group’s legitimacy on the left was among the added values it brought to the Jewish table and a reason why the Jewish center had softened its stance.

“The center-right understands they don’t present the best face on BDS,” he said.

That strength is also J Street’s Achilles’ heel in its bid for establishment bona fides: its inability to accrue associates on the Republican side of the congressional aisle. Not one Republican is slated to speak during the conference, and in recent elections, J Street’s affiliated political action committee has backed only Democrats.

Ben-Ami said Republicans are becoming more right wing and have moved away from the peace process activism that was evident as recently as George W. Bush’s second term, when Condoleezza Rice, as secretary of state, spearheaded the Annapolis peace talks. But he acknowledged it was necessary for J Street to forge alliances with the GOP.

“It is a very important goal of ours to try and make some inroads in the Republican Party on the Hill because this used to be an area of bipartisan agreement,” Ben-Ami said, referring to the backing for a two-state solution.

Republicans say J Street’s missteps have undercut its credibility. Fifty-four members of Congress, not a single Republican among them, signed a J Street-backed congressional letter in 2010 urging President Obama to press Israel to lift certain embargoes on the Gaza Strip.

J Street’s touting of the letter made it appear partisan, a view reinforced later that year when it was revealed that Ben-Ami had lied about receiving support from the liberal philanthropist George Soros.

Most damning, however, for Republicans, was Ben-Ami telling The New York Times in 2010, “Our No. 1 agenda item is to do whatever we can in Congress to act as the president’s blocking back.”

In his interview with JTA, Ben-Ami attempted to walk back the quote, saying he would have made the same pledge in George W. Bush’s last two years in office, when the president made reviving Israeli-Palestinian talks a priority.

Matt Brooks, the director of the Republican Jewish Coalition, wasn’t buying the explanation.

“You define yourself very clearly where you stand when you call yourself the blocking back for the president,” Brooks told JTA. “It’s no surprise that Republicans are distrustful and by and large in disagreement with the strategies of J Street.”

Halber of the Washington JCRC agreed.

“Their missions statement is not bad,” he said. “The problem with J Street is that they’ve turned Israel into a partisan issue.”

It’s a message the group has taken to heart. J Street led lobbying this summer for a congressional letter urging Obama to take up the offer of the newly elected Iranian president, Hassan Rohani, to engage. Of the more than 130 signatories, 18 were Republican.

In Israel, J Street appears to have had even more success in breaking through the party line.

Michael Oren, the outgoing Israeli ambassador who once scored the group as a blight on the American Jewish body politic, now has close relations with Ben-Ami. Oren, Ben-Ami said, has been a “tremendous” ambassador.