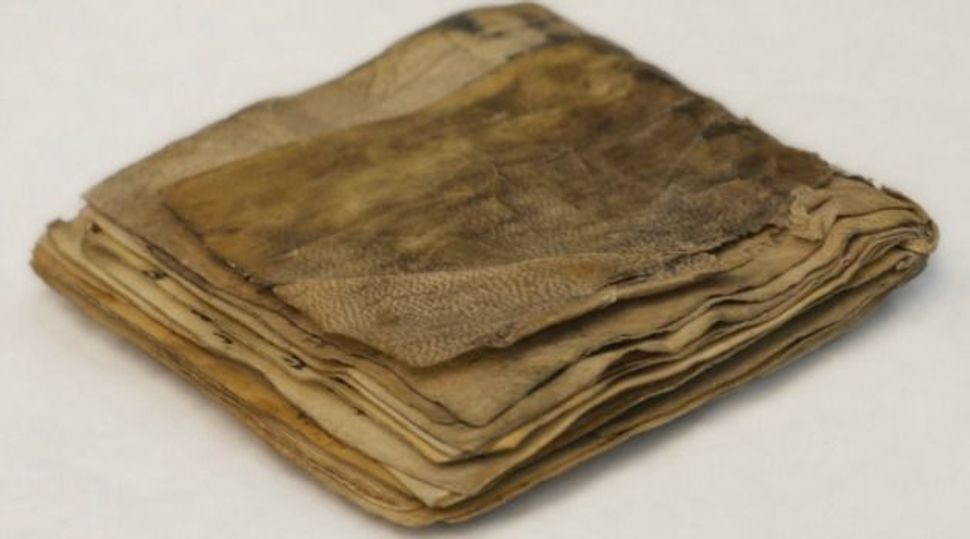 Missing Link: The oldest existing Jewish prayer book has been dated by scientists to the 9th century. It offers a crucial tie between modern Jewish practice and Biblical times. Image by green collection

A 1,200-year-old parchment Jewish prayer book that is billed as the oldest in existence was introduced Sept. 27 by a prominent private collector of Biblical artifacts.

The complete 50-page book with original 13-by-10 centimeter binding features early Babylonian vowels, which are a precursor to modern Hebrew vowels. Those, along with Carbon-14 dating, helped scholars arrive at the 9th-century date, which would make the prayer book several hundred years older than the oldest Torah scrolls, although later than the Dead Sea Scrolls.

“This is the oldest Jewish prayer book known to exist in the world,” said Steven Green, the president of the retail chain Hobby Lobby, announcing the identification at the Religion Newswriters Association conference here.

Green’s eponymous collection, which contains more than 40,000 artifacts, is slated to have a permanent home when the Museum of the Bible opens in Washington, D.C.

Green Scholars believe that after research “that this artifact may very well be the earliest connection today’s practicing Jews have to the roots of their rabbinic liturgy,” added Green, who said that ancient Jewish practice was to bury or ritually discard holy texts that had fallen into disrepair.

“It’s why we see so few Jewish texts dating even before the 15th century,” Green said.

Full research on the book will be published next year or in early 2015 with the Netherlands-based Brill, edited by Emanuel Tov, a bible professor at Hebrew University of Jerusalem, and Jerry Pattengale, executive director of the Green Scholars Initiative, according to Green.

In response to questions after the presentation, Green and Pattengale declined to comment on how much the book cost, or which private collection it came from. Pattengale said the book contains six segments, but didn’t say if there were any inscriptions identifying the book’s patrons or early owners.

The collectors also declined to say whether the book was unearthed in the Holy Land or elsewhere.

The prayer book features services for Sabbath and the 100 blessings that some Jews say every day, according to Pattengale. “This is probably the earliest account of the 100 Benedictions,” he said. “I wish you could have been in the room when they started realizing what was happening. Just sometimes things are in collections for centuries—not decades—and they simply did not understand how early it was.”

“This does appear to be a Shabbat-dedicated prayer book,” he added, “but the 100 blessings would have been a daily read.”

One question the scholars working on the book might be looking at is whether the dating suggests the book is the prayer book of Amram Gaon, who died around the year 875 and was said to have codified the first Jewish prayer book.