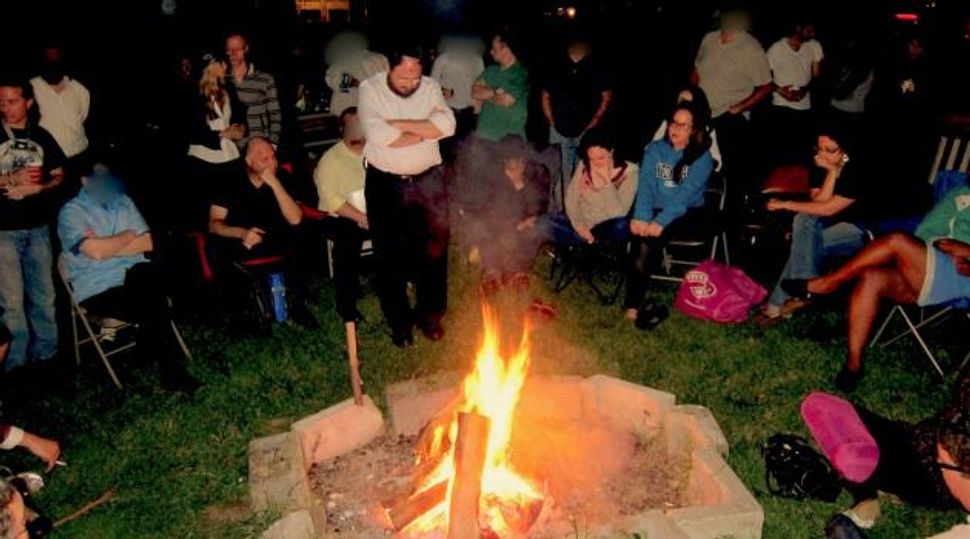 Not Forgotten: Deb Tambor was remembered at a poignant memorial gathering. Unfortunately, her tragic story is all too common among those who leave the Hasidic world. Image by blesofsky photos

Deb Tambor ended her own life in response to being ostracized by her family in the upstate Hasidic enclave of New Square, N.Y. in Rockland County, her friends say. And though most Hasidim who leave insular communities don’t end their own lives, they face many of the same challenges.

Tambor, who grew up in New Square, a self-contained village controlled by the Skver Hasidic community, was depressed after she divorced her husband and moved away four years ago, her friends say. She struggled with memories of alleged sexual abuse by a member of her own extended family and with the refusal of her other family members to believe her when she told them. After leaving, her friends note, she also lost custody of her children in court proceedings in which her own father testified against her.’ 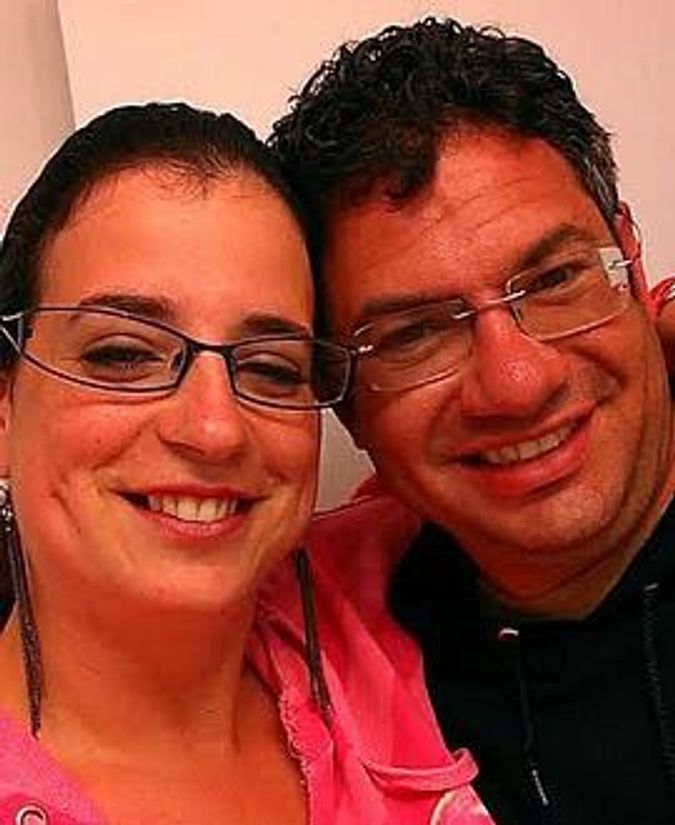 Chaim Levin, a former Lubavitcher, said that this experience was common. People “have to choose between their kids or their own lives,” he said. “I talk to so many people who are frum” — traditionally observant — “only because they know that if they aren’t, they’ll lose their kids.”

Levin said he personally knew as many as 10 people who have lost custody of their children because they have left the ultra-Orthodox community.

For Tambor’s friends, her apparent suicide on September 27 — an official coroner’s report is pending — has become a galvanizing moment. Many are members of the so-called “off the derech,” or OTD, community, a term that uses the Hebrew word for “path” to describe those who leave the traditional Orthodox way of life, with its strict adherence to Orthodox Halacha, or Jewish religious law.

Tambor’s friends are hoping that her death, at 33, prompts a change in the way Hasidim who leave their communities are treated.

A growing number of support forums for the formerly Orthodox have been recently established that aim to encourage such a change. It began with Footsteps, which has provided services to some 800 formerly Orthodox people from insular communities seeking to make their way in the secular world since it was formed a decade ago, according to its executive director, Lani Santo.

A private Facebook group called “Off the Derech” has 755 members. There are a burgeoning number of OTD bloggers. And Pearl Reich, the daughter of a prominent Hasidic rabbi in Borough Park, Brooklyn who left her community, is starting an offline group, Your Kids Deserve You, to support parents separated from their children.

Experts say that there may even be some early indications of some openness to addressing issues of sexual abuse and mental health in insular Hasidic communities, including New Square and Kiryas Joel, another upstate New York Hasidic enclave, which is populated by the Satmar Hasidic community.

When someone leaves an ultra-Orthodox community, he or she leaves a social support network of extraordinary strength. The cohesion of those communities comes with an insularity amplified by the distinctive, ultra-Orthodox dress style and the use of Yiddish as their primary language.

When people depart, they face a modern world for which many are ill prepared. Being a parent can compound those challenges with a battle for custody. Among other things, the ultra-Orthodox community will often help provide for the legal costs of the parent who stays, while the one who leaves seldom has resources to match.

“There’s a lot of stigma, a lot of shaming,” said psychotherapist Michael Jenkins, director of programs at Footsteps. “I’ve heard stories made up to attack the parents [who are leaving]. If it’s a long court battle, often the person leaving will just resign themselves” to giving up custody of his or her children. “They feel it’s insurmountable.”

The religious community they are leaving “will separate them from seeing the spouse leaving as much as possible, because they are seen as a negative influence,” Jenkins said. “Most people would prefer that the spouse who is leaving just leave and be invisible.”

Rabbi Yakov Horowitz, a well-known yeshiva educator and advocate for abused children in Monsey, N.Y., sees the number of contested custody cases arising from such instances growing. He also sees the point of view of the parent who remains in the community when he or she fights to limit the child’s exposure to the “departed” parent’s new life.

“If a child is raised in a very sheltered environment, it is very jarring to have to navigate in between the two worlds,” he said. “The judges in situations where children are on a track typically favor the status quo.”

Santo, an advocate for those who leave, puts it differently. “In family court, the community makes sure that the best interests of the children and of the [Haredi] community are seen as one and the same by the court system,” she said.

Shulem Deen, 38, is a father of five children ranging in age from 11 to 19. Raised in Boro Park, Deen attended the Skver yeshiva in Brooklyn’s Williamsburg as a teen. Later he moved to New Square, and at 18 he married a woman raised there.

When he was 30, he said, Deen began losing faith in the tenets of Orthodox Judaism, and in 2005, rabbis in New Square’s religious court ordered him to leave the community. He and his wife and children moved to Monsey, a less insular Orthodox community nearby. But it didn’t go well. His sons “don’t speak English at all, and the kids just didn’t fit in,” Deen said. He and his wife also eventually divorced.

“It wasn’t working for anyone,” he said.

Deen’s wife moved back to New Square, where her large extended family lives. And initially, Deen said, he and his ex-wife agreed they would both remain closely involved in their children’s lives. Deen would see his children twice a week and have them over for the Sabbath. But nine months after the split, his ex-wife petitioned for sole custody, just as Deen lost his longtime job as a computer programmer.

“My children started withdrawing,” he related. “One said, ‘Mommy said you want to turn us into goyim and put us in public school.’ They [the Skver community] were brainwashing the children.”

According to Deen, his ex-wife’s brother-in-law, who became an intermediary, told him they did not want him seeing his children at all. When he resisted, he said, they agreed to let him see the children six times a year and only until they turned 13.

“They strong-armed me into giving up,” Deen said. “I had no money, and she had all the community support to fight this. I realized it would be a losing battle.”

Deen, who currently lives in Brooklyn, now sees only his youngest child, an 11-year-old son, and just once every other month. The others, older now, refuse to see him.

Reached by telephone, Deen’s ex-wife said that she did not want to share her perspective on the divorce.

The prospect of losing one’s children is enough of a threat that it compels many people to stay in communities and marriages in which they no longer feel they belong, those involved say.

“It’s leverage being used against them to keep them in,” said Rabbi Eliyahu Fink, an Orthodox rabbi in Santa Monica, Calif., who grew up in Monsey and frequently counsels people struggling within Orthodoxy.

According to Abe Weiss, who left the Skver community in Williamsburg, Brooklyn, several years earlier, and later became Tambor’s boyfriend, it was after Tambor checked herself into a psychiatric hospital to deal with her depression that her family members in New Square moved to block her from seeing her children.

The family eventually gained full custody of her children via a court order, said Weiss, who had been living with Tambor for eight months at the time of her death. She was able to see her children only once every other week for an hour, and only in New Square, in visitation supervised by her sister, Weiss said. When her ex-husband remarried, he added, Tambor’s husband and family encouraged her children to call their new step-mother “Mommy” and Tambor by only her first name.

“Her depression started when she decided to leave the community and was threatened with losing her kids,” Weiss told the Forward. “Her biggest issue was that no one cared for her; everyone blew off all her issues.”

Tambor’s ex-husband did not return a phone message left for him, and subsequent phone calls were cut off.

Psychotherapist Isaac Schechter, whose clients are mostly from ultra-Orthodox communities in Rockland County, north of New York City, acknowledged that “certainly there are some for whom [mental illness] is a black mark” on a family’s reputation. But he said, “That is evolving just as it is in the general population.”

Schechter, who runs the Center for Applied Psychology at Bikur Cholim Partners in Health, in Rockland County, said his client base has more than quadrupled since it opened just a little more than a decade ago. It now includes about 1,000 people seeking treatment each year.

“I see lawyers and one spouse or another using mental illness indiscriminately in the proceedings,” Schechter said. “Unfortunately, those do not lead to good outcomes for the children.”

Schechter recently started an institute to do research on psychological, psychiatric and social issues in ultra-Orthodox communities, in order to provide meaningful data to rabbinic leadership and clinicians there. His goal, he said, is to “create change without garnering as much reactivity, as much resistance,” from the religious community, he said.

David Pelcovitz, Straus Chair in Psychology and Jewish Education at Yeshiva University’s Azrieli Graduate School of Jewish Education and Administration, said he saw the beginnings of “at least openness to recognizing the need for teacher training, for rabbinic training and parent training” regarding mental illness. But he added, “There’s still a very long way to go.”

Victims of sexual abuse in particular face a “unique risk” of suicide, Pelcovitz said. They often experience “a loss of sense of meaning, and in religious beliefs,” he explained. Yet if they leave their ultra-Orthodox community, people there often see no connection. “From the perspective of the community the rebelliousness is viewed as willful and without any obvious cause,” Pelcovitz said.

Mirka Hermoza Laznick, a mother of six who resides in the Crown Heights section of Brooklyn and says she is fighting similar battles with her own estranged husband, met Tambor at a meeting of OTDers in a Brooklyn coffee shop several months ago. Tambor told her then that her children were being told, “Your mother is a goy; she doesn’t love you.” “She told me ‘I don’t know how to live without them,’” Laznick said.