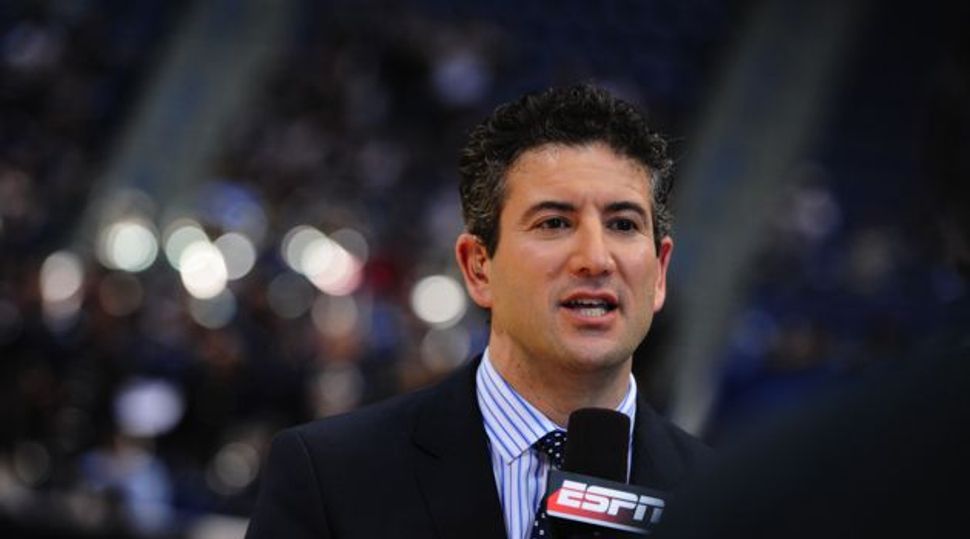 Chances are, if you are a college basketball fan, you have seen Andy Katz on ESPN. With nearly 300,000 followers on Twitter, Katz, is ESPN’s senior college basketball reporter and is a regular analyst on “College GameNight” and “SportsCenter.”

Before making the jump to ESPN in 2000, Katz worked for the Milwaukee Journal Sentinel, the Albuquerque Journal and The Fresno Bee.

Despite being a college basketball guru, Katz studied history and political science at the University of Wisconsin.

The Forward’s Raphael Gellar spoke to Katz about his career as a journalist, his time with President Obama and his Jewish background.

Raphael Gellar: Can you see yourself reporting on something other than college basketball?

Andy Katz: I do now. I cover the NCAA quite a bit, and the NBA draft. I’m also now a backup host for “Outside the Lines,” covering a variety of topics, depending on the news of the day. I love branching out and reporting and anchoring on deeper-depth stories. I have a passion for the political and international scene, and follow the news of the day or week as much as I do college basketball.

Your college degree is in political science and history. How did you become a college basketball reporter?

I worked in journalism in college at the paper and in radio before working for newspapers in Madison and Milwaukee. But if I didn’t get a full-time writing job in New Mexico, I was interested in going into naval intelligence and using my degree. When I finished school in 1990, the Soviet Union had just broken up the previous year and there were still factions of the Cold War that were still viable. I’m still a history and political junkie to this day.

Does Judaism affect your work?

Being Jewish is a part of me on a daily basis. My wife was raised Catholic and is not Jewish, but our children are being raised Jewish. We have a diverse family with my wife’s family in New Mexico and Las Vegas, which enriches my children’s lives. We live in a very Jewish area in West Hartford [in Conn.] But my ethnic background and my religion have no bearing on my work at ESPN.

There are a lot of Jewish people who work at ESPN: Dan Shulman, Tony Kornheiser, Marc Stein and Jeremy Schaap, among others. Do you guys ever talk with each other about your shared background?

Yes. We have a strong group at ESPN, and there are a number of Jewish people at ESPN who attend my synagogue and/or are members at the [Jewish community center]. It doesn’t define who we are at ESPN, but is just another bonding element to what is one of the best places to work at in the United States.

What is your favorite thing about working at ESPN?

I love the ability to do a variety of things, from writing, to reporting, to anchoring, to helping in the community, to representing ESPN here and around the country.

Each year, you and President Obama fill out picks for the NCAA Men’s Basketball tournament. What kind of experience has that been for you?

I first asked then senator Obama two weeks before the 2008 election. It was something that just popped in my head in a brief moment. He said “sure” at the time, and to his and his team’s credit they were true to their word. It has now become our yearly ritual and fostered many other interactions with the White House, either in D.C. or at other spots where we have been broadcasting. The experience is priceless. I’ve been to the White House 10 times since 2008. It never gets old. I love the history!

Have you ever visited Israel?

I’m the only one in my immediate family who has never been to Israel. My parents went years ago, and my brother spent a summer there. I wish Birthright was available when I was a teenager. But our plan is to go in April of 2016, after my daughter’s bat mitzvah in the fall of 2015. Hopefully we can make that trip happen.