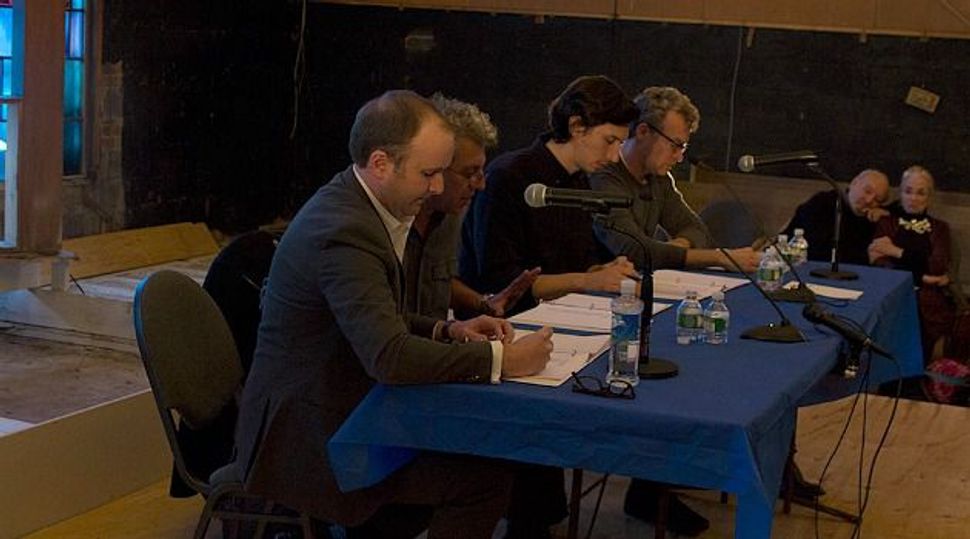 Biblical Message: Reading from the Book of Job, member of Outside the Wire brought message of hope to the West End Temple on the anniversary of Hurricane Sandy. Image by Viola Gad

A large, empty space looms behind the makeshift wooden stage at the West End Temple in the Rockaways section of Queens, N.Y. A year after Sandy struck, there is still no heat. Electrical cables protrude from the raw unfinished walls and a plastic sheet covers the emergency exit in the sanctuary.

Surrounded by all the charm of a construction site, famed actors Eric Bogosian, Tate Donovan and Adam Driver read from the Bible’s Book of Job. The ancient story of the righteous man who loses everything as a test from God could not be more fitting.

The performance held on Sunday, Oct. 27 marked the first time many congregants set foot in the former sanctuary. For much of the past year, the small Reform congregation in the Neponsit neighborhood had to hold services in a trailer set in the car park. Parts of the building are inhabitable again, but shortage of funds has slowed the repairs.

Presented by Outside the Wire, a New York social impact company, the event was sold out — and the actors brought struggling Job, his compassionate friends Zophar, Eliphaz and Bildad, and their conversation with God back to life.

Moderator Bryan Doerries told the crowd that the actors did not come to preach about how to recover from the storm.

“We’re not here to tell you what this is about,” Bryan Doerries , the group’s artistic director told about 140 people in the audience after the half-hour long reading, adding he wanted to hear what people who had suffered themselves thought about the story.

Laurie Musumeci, the temple’s vice-president, said it was difficult to listen to the Bible story, after all the trials the congregation has faced.

“I got sick of hearing Job,” said Musumeci, who was among the three panelists to take the stage following the reading. “What good does the ranting do? We’ve got to move forward and get stuff done.” 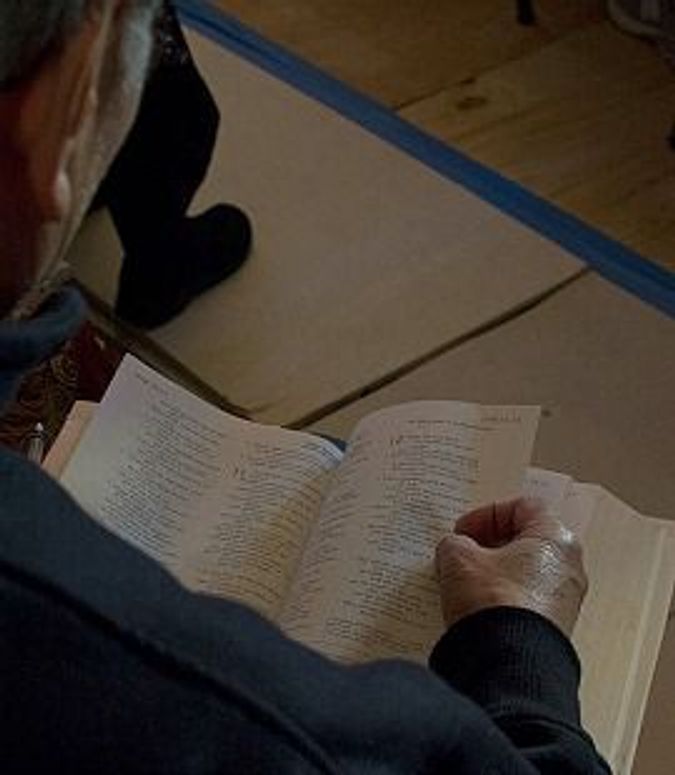 Many in the audience were more sympathetic of Job, whom God stripped of his possessions, children and health to test his faith, as they struggled with coming to grips with the suffering brought by the superstorm last year, which killed 43 people New York City and damaged scores of synagogues.

“It is impossible to rationalize,” said Steven Stabiner, a retired firefighter, whose Rockaway basement was flooded. “That’s when it gets exhausting.” The Rockaway Peninsula was particularly hard hit by Sandy, with a fire destroying around 200 homes in the Breezy Point neighborhood, and the flood waters and strong rains and winds damaging thousands of others.

In response to the biblical passage in which Job’s friends try to establish the reason for Job’s unjust fate, Jonathan Katz, the director of the Rita J. Kaplan Jewish Community Services, said: “The damage really doesn’t reflect a whole litany of sins. One of the worst things people can do in crisis is blame ourselves.”

The story of Job has a “happy ending”: God doubles his prosperity and children, and lets Job live another 140 years. Several people in the audience mentioned that they felt closer to the neighbors after the storm, trading tools and coordinating construction work. “I feel so blessed to be richer in friendship, perseverance and gratitude,” Alyson Lee said, earning applause from the audience. Lee is a member of the Saint Francis De Sales church in Belle Harbor, Rockaway. She said started to notice more about the different denominations in her neighborhood after the storm.

The West End Temple itself hasn’t quite returned to its previous glory yet. “We’re slowly, slowly moving back in,” Rabbi Marjorie Slome said. The congregation was able to start using its multi-purpose room for services in June, abandoning the trailer in the car park, even though the room currently relies on temporary electricity and heating.

So far, the Temple received $1 million in flood insurance. Project manager Susan Greenbaum is in the process of applying for additional coverage for damage done by the wind-driven rain.

More importantly, she is waiting to be able to appeal the denial of aid from FEMA, which is barred by law from giving aid to houses of worship unless it is used for some other purpose, such as a school or soup kitchen. Two of the three applications were denied, althouth the temple did receive $4,000 in federal aid to repair a wall that was knocked down.

“We are in a state of limbo with FEMA,” Greenbaum said.

In the meantime, repairs in the Temple continue slowly, relying partly on donations from the UJA-Federation, the Union for Reform Judaism and individuals from within the congregation and outside. The basement is still unusable, and Rabbi Slome’s office has bare walls and looks like it serves as a depot.

“A temple like that can’t be undone for two years,” Greenbaum said. “It will disintegrate. The community needs this.”