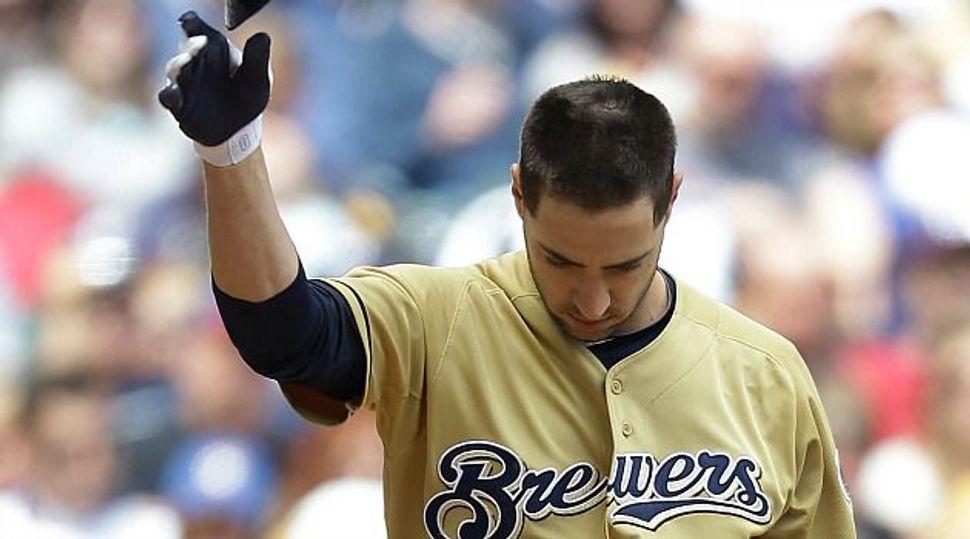 There are two things that every Jewish baseball fan knows about Ryan Braun.

First, the Milwaukee Brewer leftfielder is the best Jewish ballplayer in the majors today. Second, as a result of his self-inflicted tsoris, Braun faces the gargantuan challenge of winning back his fans when he returns to baseball next spring, following his 65-game suspension this past season for using banned performance-enhancing drugs.

“It’s hard to forgive someone who out and out lies and then gets caught,” said Ari Fleischer, who served as the White House press secretary for George W. Bush. He now heads Ari Fleischer Sports Communications.

Still, if there is any group that can forgive the new Hebrew Hammer, it’s the Jewish community, said Jason Miller, a Detroit rabbi and blogger who comments frequently on Jewish issues.

“We do value repentance so highly,” said Miller who is a member of the board of directors of the Michigan Jewish Sports Foundation. “We will be willing to give him a second chance.”

The Jewish community and fans of all backgrounds quickly embraced Braun in 2007, when he came to the major leagues as a soft-spoken third baseman. Braun, who was later moved to left field, got tagged soon as the “Hebrew Hammer,” the same nickname given to Hank Greenberg, the revered Detroit Tigers Hall of Famer.

Braun’s father is Jewish, and the five-time all-star has said he considers himself Jewish, although he did not have a bar mitzvah and has played on Yom Kippur.

Being Jewish is “not something he wears on his sleeve,” Miller acknowledged about Braun. In 2007, Miller related, he found himself staying at the same Arizona hotel as Braun, who was then a rookie. The ballplayer told him then, “I don’t think anybody on this team knows I’m Jewish.”

There are about a dozen Jewish major leaguers today, though many Jews may put asterisks next to some of their names because they have just one Jewish parent, play on Yom Kippur or have married a non-Jew.

But Irwin Cohen, a former Detroit Tigers front-office executive and the author of recent book, “Jewish History in the Time of Baseball’s Jews: Life on Both Sides of the Ocean,” said that there is still a connection: “You identify with them. You kvell.”

In Braun’s case, the kvelling has morphed into a kvetch.

“The biggest disappointment for many of us was that he was not truthful the first time around,” Miller said. “That was very disappointing to me.”

In 2011, when Braun first tested positive for use of performance-enhancing drugs (or PEDs), he challenged the results, winning on a technicality after an arbitrator raised chain of custody questions regarding Braun’s urine sample. At the time, Braun vehemently denied ever using a banned substance. And he publicly criticized Dino Laurenzi Jr., the Kenosha, Wis., man whose job it was to collect urine samples from Braun and other athletes.

Gasoline was thrown on the fire this year when, citing three unnamed sources, ESPN reported that Braun had told other major leaguers that Laurenzi was anti-Semitic and a Cubs fan to boot. Kenosha is located between Chicago and Milwaukee, and the Cubs are a Brewers division rival.

For the next year, Braun continued professing his innocence, even telling star Green Bay Packer quarterback Aaron Rodgers — a friend and business partner — that he was clean. But then, a separate investigation of a clinic in Florida turned up written evidence that he used PEDs.

“I don’t think he helped himself very much by doing that,” said Rabbi Joshua Ben-Gideon of Beth Israel Center, a Conservative synagogue in Madison, Wis. Though Ben-Gideon is from the East Coast, he has been at the Madison synagogue since 2008 — long enough to understand the state’s universal love for the Packers.

“Aaron Rodgers is very, very respected,” the rabbi said of the All-Pro quarterback. Braun, he noted, “seemed to be lying directly to Aaron Rodgers.”

Braun’s repeated denials and his willingness to blame others put him in a special league of disgraced athletes, Fleischer said — a group that includes Lance Armstrong and Alex Rodriguez.

“He’s given himself a high hurdle to overcome,” Fleischer said.

It wasn’t until this year, in the face of apparently overwhelming evidence, that Braun accepted his suspension and admitted in a written statement of apology that he had “made some mistakes.”

To many, this was shallow. On ESPN’s “Parting Shots,” John Saunders opined, “His sorry excuses won’t restore faith in the game anymore than Bernie Madoff’s excuses put money back in bank accounts.”

But Ben-Gideon said that Braun’s apology could be a first step in his moral comeback.

“It’s a form of teshuvah — acknowledging wrongdoing, taking his punishment without fighting it,” Ben-Gideon said.

Braun has paid a price for his violations, losing numerous endorsements, including deals with Nike, Muscle Milk and Wilson Sporting Goods. A Milwaukee restaurant group that featured Braun at two of its eateries cut its ties to the ballplayer, who in 2011 was named the National League’s Most Valuable Player.

Braun has even been kicked off the cover of a new Jewish sports book for children, “Jewish Sports Stars: Athletic Heroes Past and Present,” written by David J. Goldman and published by Kar-Ben.

”After the steroids scandal surfaced, his image was tarnished and he was no longer appropriate to serve as a role model for Jewish kids,” Joni Sussman, the book imprint’s publisher, told Publishers Weekly in September.

Braun’s prospects for redemption now depend on how he handles himself both on and off the field.

“The best thing he could do is continue to embrace his Judaism,” Miller advised. “He could write something, or speak publicly with an explanation of exactly what happened…. In Judaism we acknowledge that human beings are not perfect, and we give them an opportunity to repent.” Even the allegation that Braun labeled Laurenzi an anti-Semite could be forgiven, he said, adding, “We’re actually a very forgiving people.”

But Miller said he hopes Braun will ultimately address the issue by facing the cameras directly and talking to his public.

“If it turns out that Braun actually did accuse Laurenzi of having ulterior motives… I hope that he’ll issue a public apology to Laurenzi as well as to his fans, his team, and to Major League Baseball,” Miller wrote in an email to the Forward.

Bryan Burwell, of the St. Louis Post-Dispatch, took a look at the prepared statement Braun issued after accepting his suspension and noted that “In nearly 1,000 words, only 12 were used to apologize to Dino Laurenzi Jr., the specimen collector he disparaged so shamelessly.”

Fleischer stressed the importance of Braun coming forward in person to acknowledge his wrongdoing. But he expressed doubts as to whether the ballplayer would be able to do so in a convincing manner.

“He has to be contrite and, if possible, be sincere and really mean it,” Fleischer said. ”I don’t know if he’s capable of doing that.”

But Fleischer emphasized that he did not think Braun’s woes should be viewed as a Jewish issue. “I wanted to say that in a Jewish paper,” Fleischer said.

Then there is the question of how Braun — who is, after all, a ballplayer — will perform on the field. This will no doubt influence the fans.

“He’ll let his bat do the talking,” Fleischer said.

A few home runs and key runs batted in will go a long way in Braun’s effort to win back fans, agreed Miriam Maistelman, a 13-year-old Brewers fan who plays baseball and softball for teams in suburban Milwaukee. “In baseball we should focus on a how a person plays, not his religion,” the Jewish seventh-grader said. Still, Braun will have to earn back Miriam’s respect. “He really messed up,” she said.

Asked how she will respond when Braun comes onto the field at Miller Park to begin the 2014 season next spring, Maistelman said initially that she would cheer. Then, after a moment to reflect, she changed her mind.

“I’ll cheer for the team in general,” Miriam said. “But not for him.”