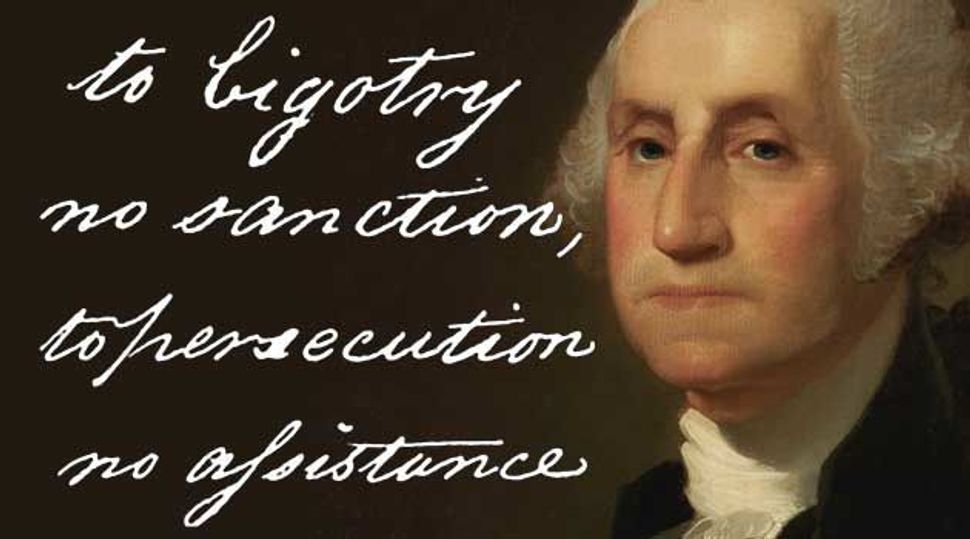 On the Block: A 1790 reprint of Moses Seixas?s letter to George Washington will be auctioned on December 10. Image by Forward Montage

On December 2, 1763, the first day of Hanukkah, a procession wound through Newport, R.I., carrying three Torah scrolls bound for their new home in a synagogue that would quickly establish its place in American Jewish lore.

When the scrolls entered the newly built Touro Synagogue, their arrival was celebrated with music and prayer that moved even the non-Jews among those assembled.

“The Order and Decorum, the Harmony & Solemnity of the Musick, together with a handsome Assembly of People, in an Edifice the most perfect of the Temple kind perhaps in America… could not but raise in the Mind a faint Idea of the Majesty & Grandeur of the Ancient Jewish Worship mentioned in Scripture,” the Rev. Ezra Stiles wrote in his diary of that day.

Two hundred and fifty years later, on December 1, the congregation that worships at that same synagogue will celebrate this historic occasion with its own procession through Newport and a rededication ceremony that will hew as closely as possible to the original.

“We have a record of what took place 250 years ago that makes it relatively easy for us,” Rabbi Marc Mandel of Touro Synagogue said, referring to Stiles’s diaries. “We don’t have to guess.”

Touro, the oldest synagogue in America and a classic of colonial architecture, is best known for its links to George Washington’s famous letter to the Hebrew Congregation, in Newport.

Washington’s letter to the Newport congregation, in which he pledged that the fledgling government of the United States would “give to bigotry no sanction, to persecution no assistance,” is generally regarded as his most eloquent treatise on religious liberty.

Documents associated with the letter are much sought after by collectors today, not least because contemporary printings of Washington’s letter in Rhode Island newspapers, the Newport Mercury and the Providence Journal, have gone missing from the Newport Historical Society and other local collections. “Someone went around town stealing these pages out of libraries and archives,” said Ruth Taylor, executive director of Newport Historical Society.

Moses Seixas, the warden of Touro Synagogue, was responsible for corresponding with Washington on behalf of the congregation.

A printing of Seixas’s letter to Washington and of Washington’ famous response, published in the Gazette of the United States, a Federalist party newspaper, will go on sale at Bonhams auction house, in New York, on December 10.

That September 15, 1790, issue of the Gazette, as well as a September 11 issue, which reported on Washington’s correspondence with Seixas in Seixas’s role as master of the King David’s Masonic Lodge, is valued by Bonhams at between $80,000 and $100,000.

Rachael Goldman, a Judaica consultant for Bonhams, said that according to other collectors, there are only four such examples of the September 15 issue of the Gazette in existence today.

The newspapers will be displayed in a preview at Bonhams, from December 5, alongside paintings, books and ceremonial objects that make up the auction house’s first-ever Judaica sale.

The original of Washington’s letter made headlines in July 2012, when it went on public display for the first time in a decade at the National Museum of American Jewish History, in Philadelphia.

The letter is halfway through a three-year loan from the Morris Morgenstern Foundation. Josh Perelman, the NMAJH’s chief curator, said, “We continue to be in conversation with the lender about a longer-term arrangement.”

The Newport congregation celebrates its links to the Washington letter each August, with a public reading. This year, Supreme Court Justice Elena Kagan delivered the keynote address.

Mandel said that the December rededication ceremony would be a little more low-key, and that he consulted several sources for information on the ceremony, including Rabbi Morris Gutstein’s “The Story of the Jews of Newport,” published in 1936.

The most recent work in the canon of Newport’s Jewish history is “A Genesis of Religious Freedom,” published this year by historian Melvin Urofsky.

Like those before him, Urofsky leaned heavily on Stiles’s diaries to describe how, when the Torah scrolls arrived at the synagogue, “three knocks came from outside upon the closed front door, and the voice of [hazan] Isaac Touro could be heard chanting in Hebrew, ‘Lift up your heads, O ye gates, and be ye lifted up, ye everlasting doors, that the King of glory may come in.’”

After the congregation responded in Hebrew, the doors opened and in marched Isaac Touro, followed by the congregation’s officers “carrying with them the scrolls of the Torah, covered in beautiful mantles.”

Stiles studied Hebrew under Touro and had a great interest in Newport’s Jewish community.

According to Stiles’s diary, Touro told him that one of the synagogue’s Torah scrolls was donated to the congregation by its brethren in Amsterdam and was 200 years old.

Bert Lippincott, a reference librarian at Newport Historical Society, said that Stiles was “a classical scholar, diarist and cartographer who recorded and illustrated all local events where he lived.”

“Stiles later served as president of Yale College, and allegedly is responsible for the Hebrew motto in the college seal,” Lippincott added.