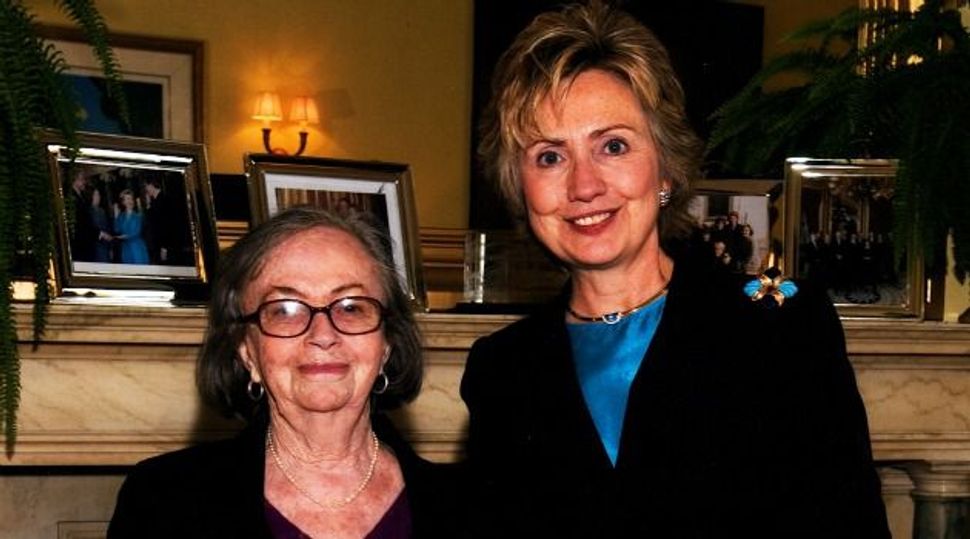 Fiercely Independent: Beyle Schaechter-Gottesman with Hilary Clinton in 2005 after winning the National Heritage Award. Image by Office of Hilary Clinton

Few of us will lead a life as full as my “shviger” (mother-in-law), Beyle Schaechter-Gottesman: a life that spanned an ocean with an unremitting creative urge and a sense of personal purpose that encompassed a universe. While it may appear that her tragedies outweighed her joys, she dazzled the world with her accomplishments and was always anticipating her next one. Fiercely independent, Beyle was not to be trifled with. Up until the end, she demanded to be heard, to be addressed personally, and to communicate in the Yiddish language she so fiercely advocated. She was loyal to the Bronx, to her home, and to her family, and never stopped working with a pen in hand, a pen that could either write a Yiddish poem or sketch a scene on the street.

Beyle was born in 1920 in Vienna to Lifshe and Binyumen Schaechter, and was older sister to Yiddish linguist Mordkhe Schaechter, of blessed memory. She embodied all of her family’s qualities: She had her mother’s musical talent, desire to be heard, and love of precious things; and her father’s intellect, poetic soul and love of Yiddish. Beyle and Mordkhe shared this intense and protective love for their “mame loshn” (mother tongue), carrying it with them to the Bronx, where they created a life in Yiddish with their families, instilling the commitment “tsu redn yidish” with like-minded families like the Fishmans and the Hoffmans who lived together on or near Bainbridge Avenue in the shtetl Bronx, known as Bainbridgifke.

As a young child, Beyle’s family moved to Czernovitz, which was then part of Romania but is now part of the Ukraine. She recalled her own surprise as a schoolgirl when the teacher asked the children what they planned to be when they grew up. Beyle’s answer, which seemed to emerge from somewhere quite deep within, was “a poet.” She wasn’t even sure what the career entailed!

Equally gifted in the visual arts, Beyle left home at 16 to become an art student in the city where she was born, Vienna. She came home two years later after Hitler’s “arayn marsh” into Austria in 1938. She had intentionally stayed a little longer than she should have to see how the Viennese would greet him. Beyle had seen the terrorism of the Nazis at first hand but it was the Soviet military who delivered the first crushing blow to the Schaechter family. Beyle’s beloved father Binyumin was arrested in September of 1940, imprisoned in Siberia after a trial on trumped-up charges. He would never return and Beyle went to her wedding five months later in the deepest mourning for her father. She talked about her father Binyumin’s goodness and honesty every day of her life.

Held together by a protective bond, Beyle, her new husband Jonas, of blessed memory, her mother Lifshe and younger brother Mordkhe weathered the crises and depredations of war in the Bukovina town of Zvintyetsche, the cradle of the Gottesmans, and in the ghetto of Czernovitz — at first saved by Jonas’s medical degree and then mainly by providence. After the war — and the decimation of the lives they knew — Jonas was appointed chief medical officer of the DP camps in Vienna. Beyle’s first child, Binyumen, died as an infant during their time in Vienna. They immigrated to New York with their one-year-old daughter Taube, of blessed memory, in 1951.

As a young mother in the Bronx, Beyle wanted to make sure that her children grew up in an enriched Yiddish environment. Employing her creative powers, she penned songs, poetry, plays and storybooks for children in Yiddish. Her first book, “Khayml un taybele,” published in 1956, is a story of her children Taube and Hyam, of blessed memory, who was born in 1953. We await the imminent publication of a second edition of this book in 2014 that introduces the birth of little brother Itzele, born in 1957. (Itzele, or Itzik, my husband, has taken full advantage of his Yiddish environment and, among other achievements, was until recently the long-serving associate editor of the Forverts)

Throughout her years of child raising, Beyle continued her creative work and her labors on behalf of Yiddish. She continued her association with the Freeland League and its successor, the League for Yiddish, and with the Sholem Aleichem Cultural Center and the Congress for Jewish Culture. She helped edit the anthology “Vidervuks” (“Regrowth”) that grew out of the Yugntruf–Youth for Yiddish writer’s circle that she mentored. She served as literary editor of “Afn Shvel” and was secretary of the Yiddish PEN club. She studied at the Jewish Teachers Seminary in New York and became a force on the Yiddish educational scene, teaching at the Workmen’s Circle and the Sholem Aleichem Folkshuln, and editing a magazine for children, “Kinderzhurnal,” and a magazine of children’s writings — “Enge-benge.” The Monday afternoon “shmeuskrayz” held rain or shine in her Bronx home is well into its third decade. Beyle continued throughout to paint, draw and sketch. Her favorite subjects were children at play, dolls, flowers, cityscapes, her grandmothers and her children.

1963 brought her first book of children’s poetry, “Mir Forn” (“We’re Travelling”). She published her first poems for adults in Kayda Molodovsky’s journal, “Svive,” and would go on to publish six books of poetry and appear in major Yiddish poetry anthologies. Her debut poetry collection of 1972, “Steshkes tsvishn moyern” (“Footpaths Amid Stone Walls”) was followed by “Sharey” (“Dawn”) in 1980; “Lider” (“Poems”) in 1995; “Perpl shlenglt zikh der veg” (“The Winding Purple Road”) in 2002; “Der tsvit fun teg” (“The Blossom of Days”) in 2007; and at age 93, “A vinkl gantskeyt” (“A Solid Spot”) in 2012. All of her poetry books were copiously illustrated with her own sketches.

Beyle produced a third children’s book, “Mume blume di makhsheyfe” (“Aunt Bluma the Witch”), in 2000 and three recordings of original songs: “Zumerteg” (“Summer Days”) in 1991; “Af di gasn fun der shtot” (“On the Streets of the City”) in 2003; and “Fli, mayn flishlang!” (“Fly, Fly My Kite!”), a collection of children’s songs, in 2006. She composed the music and wrote the lyrics, and the songs were sung by leading Yiddish vocalists as well as by herself. She also recorded a CD of songs she remembered from her childhood in Czernovitz, “Bay mayn mames shtibele” (“At My Mother’s House”), in 2004. Songbooks for “Zumerteg” and “Fli, mayn flishlang” appeared in 1990 and 1999 respectively.

Beyle was one of the great composers of contemporary Yiddish song as well as a major resource for a younger generation interested in Yiddish culture. She was an outstanding singer and an intuitive songwriter, translating the rhythms of everyday life into her music and poetry. Not trained to read music or transcribe notes, she recorded her melodies into a tape recorder for transcription by others.

She received many honors, including City Lore’s People’s Hall of Fame Award in 1998. She was the guest of honor at Yiddish Summer Weimer in 2004, teaching and inspiring Yiddish singers from all over Europe to perform and record her songs. In her quarterly ASCAP reports, she could see that people were listening to her recordings in France, Holland, Poland, Germany, England, Canada and in unexpected places like Macedonia, Greece, Argentina and Japan. Beyle got great pleasure surfing the web with Itzik to find random sightings of her music on YouTube and other websites.

In 2005, the National Endowment for the Arts honored her with the coveted National Heritage Award, their highest recognition for artistic achievement in the traditional arts. She was the first Yiddish poet to be so honored. Then Senator Hillary Clinton set up a special meeting in her office to greet Beyle.

Through it all, Beyle maintained her singular focus, her healthy skepticism, and her abhorrence of superfluous cheerfulness. Never without her pen and paper, she kept herself going through the most crushing difficulties. She rolled all her experiences into her work, from the shtetls of her childhood to the subways of New York. A singer with a remarkable memory, she remembered the words until the end and we too will remember her words for all our days.