Jews Bid Farewell to Bloomberg, With Powdered Sugar on their Lips 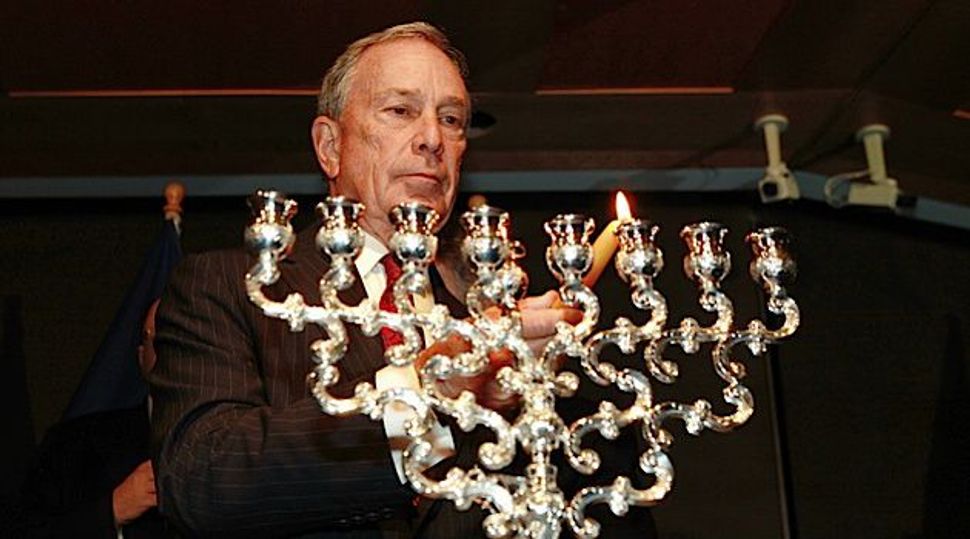 And on the sixth night of Hanukkah, Mayor Michael Bloomberg gave the Jews all the jelly donuts they could handle.

Waiters bore the ponderous mounds of donuts into the event hall at the Museum of Jewish Heritage, where 500 of the mayor’s guests were celebrating the last official Hanukkah party of the Bloomberg administration. It was a farewell party for a constituency that counted the departing mayor as one of its own — even if Bloomberg himself was a two-times-a-year kind of Jew, at most.

The mayor attended to the lighting of the silver menorah and then slipped quickly out a side door. A dense crowd hung by the corner where he was last seen, apparently hoping for an encore.

“It’s the end of an era,” said Rabbi Bob Kaplan, a senior official with the Jewish Community Relations Council of New York. “We’re all feeling it.”

As the standard-issue Jewish communal function klezmer soundtrack played in the background, Jewish officials and volunteers spoke about what the transition would mean for them. “For 12 years you know who to speak to, what to speak to them about,” Kaplan said. “[You know] the weave of the fabric. We’ve got a new fabric coming in.”

Despite the emotions and the donuts, the evening felt like an afterthought. There’s a nice view of the river from the windows of the museum’s event space, but on a dark winter night it feels sad and over-lit. The crowd, for its part, was full of Jews but light on machers. Jewish boldface names who can be relied on to pop in whenever Jewish money and flashbulbs gather didn’t show. No Malcolm Hoenlein from the Conference of Presidents of Major American Jewish Organizations. No Congressman Jerry Nadler or Senator Chuck Schumer.

For those best attuned to the flow of Jewish power, the sixth night Hanukkah action may simply have been elsewhere. Uptown at the Hilton, at the very same moment that Bloomberg’s guests were milling aimlessly, Goldman Sachs CEO Lloyd Blankfein was being honored by UJA-Federation of New York at the group’s annual Wall Street dinner.

James S. Tisch, the Loews CEO and past president of the UJA-Federation of New York, was at the Blankfein event, as was Jerry Levin, another UJA past president. Even Dan Doctoroff, Bloomberg’s former deputy mayor and the current CEO of Bloomberg L.P., chose Blankfein, as did New York City Police Commissioner Ray Kelly. Some politicians stuck with the mayor: New York State Assemblyman Alec Brook-Krasny, a broad-shouldered Russian-speaking Democrat from South Brooklyn, and fellow Assemblyman David Weprin, a former City Council member from Queens who may have Albany’s best mustache, both showed. Notably absent was former Metropolitan Council on Jewish Poverty CEO William Rapfogel, who was likely hiding under a rock in Seward Park.

Hizzoner took the stage at 6 p.m. sharp, where he introduced Robert Morgenthau, the 94-year-old former Manhattan district attorney who now serves as an avatar of elite Jewish respectability. Wearing a maroon cardigan under his suit jacket, Morgenthau praised the 61-year-old now leaving the mayor’s office, whose lengthy term was just a third the length of Morgenthau’s own as DA. “You took the helm at a difficult time and you’ve been a steady hand on the tiller,” said Morgenthau, who served in the Navy seven decades ago.

Bloomberg read some obligatory New York City sports jokes, asking for a miracle for the Giants, Jets, Knicks and Nets, all of which suck this year. Rabbi Joseph Potasnik, the executive vice president of the New York Board of Rabbis, gave Bloomberg a Red Sox yarmulke. “It’s wrapped in plastic, because one day we’ll be living in Boca where everything is wrapped in plastic,” Potasnik said.

Bloomberg seemed to be singing along as Potasnik led the crowd in the blessings over the lighting of the menorah.

This was interesting to Joseph Schwartz. The attendee said he had been to the mayor’s Hanukkah party every year of his tenure, and he could see that Bloomberg had learned something since he became mayor. “He was saying the prayers [this time],” said Schwartz. “He was mouthing it.”

Maybe being mayor of the biggest Jewish city in the world had made Bloomberg himself a little more Jewish. Or maybe it helped that he had the words in front of him on his iPad as he sang.

After Bloomberg left, the party got a little sloppy, mostly owing to the arrival of the trays of jelly donuts. “Out of this world,” said Eli Slavin, a Lubavitcher Hasid and community liaison for Congresswoman Yvette Clarke, of the donuts. “I had two.”

(This reporter also ate two and ruined his appetite for dinner.)

According to the mayor’s office, the donuts were donated by Shloimy’s Bakery in Brooklyn. A call to Shloimy’s seeking the secret of the excellent donuts was diverted to another location, which was closed. No one commented on the apparent hypocrisy of the soda-banning mayor offering only diet sodas at the bar while serving piles of jelly donuts.

The guests weren’t looking to criticize Bill de Blasio, who won the mayor’s race in November with 53% of the Jewish vote. Jewish figures already working with de Blasio were in attendance, including his Hasidic advisor, Pinny Ringel, and JCRC Executive Director Michael Miller, who is serving on de Blasio’s transition team.

Yet some expressed anxiety about the regime change. “I think [de Blasio’s] going to be given the benefit of the doubt and the support of the business community, definitely the Jewish community, but we face a period of uncertainty,” said Scott Shay, a member of UJA-Federation’s board of directors.

Others in the crowd were looking far beyond the 2014 transition. A tall, light-haired, decidedly non-Jewish fire union official and state Senate candidate named Richard Alles was being shown around the event by Elaine Shulman, a short, decidedly Jewish woman from Manhattan.

“He’s articulate, very smart, and very good looking,” she could be heard telling guests, as she pushed the deputy chief into a circle of celebrants.

Jews Bid Farewell to Bloomberg, With Powdered Sugar on their Lips