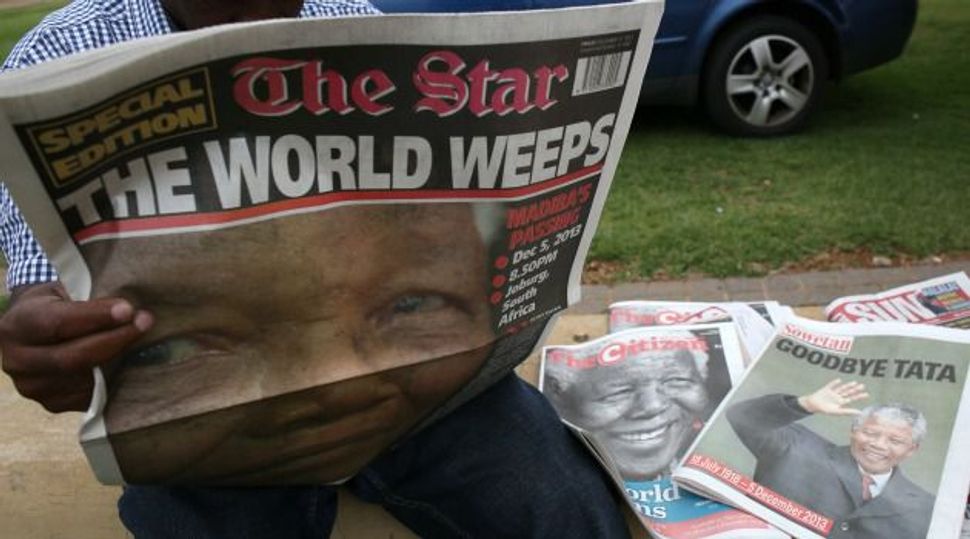 South African Jews joined the rest of the nation and the world in mourning the death of Nelson Mandela Friday with prayers and memories of the iconic figure who led the country from apartheid to freedom.

“You are talking about a person larger than life with so much compassion for every person in this country and even the entire world,” said Rabbi Dovid Hazdan of Great Park Synagogue in Johannesburg. “Our world is poorer for the loss of a great leader and icon of peace.”

David Sacks, the author of “Jewish Memories of Mandela” called Mandela a ‘mensch’ for South Africa whose spirit of openness would guide the nation going forward.

“A true giant is gone,” Sacks said. “He was a light whose presence informed the spirit of a democratic South Africa.”

The South African jewish Board of Deputies said synagogues across the country would hold memorial events for the leader who had a remarkable and durable bond with the Jewish community.

Jews played a prominent role in Mandela’s African National Congress during the struggle against apartheid and Jewish lawyers famously defended him during his trial in the early 1960s. When he emerged from prison in 1990, Mandela forged strong personal bonds with the Jewish community and individual Jewish friends and colleagues.

“Nelson Mandela epitomised the miracle of South Africa’s democratic transformation,” Wendy Kahn, national director of the SAJBD said in a statement. “May his noble example inspire [us] and may his memory be a blessing for all humanity.”

Hazdan planned to start Shabbat services Friday with a statement about the death of the anti-apartheid leader at his shul, which is not far from Mandela’s home in the suburb of Houghton.

South African Jews also expect to be included in the official funeral for Mandela, which is expected to draw leaders from around the globe.

Warren Goldstein, South Africa’s chief rabbi, recounted Mandela’s long struggle for freedom, which was punctuated with friendships and professional relationships with Jews. He called the leader’s death a clarion call for all people to fulfill the Jewish imperative of tikkun olam.

“Judaism teaches that the best way to pay tribute to those who have passed on is to do good deeds in their honour,” Goldstein said. “The greatest tribute we can pay is to live like Mandela, in accordance with the values he practiced and taught — values of human dignity, forgiveness, kindness, courage, tenacity, strength, honesty and integrity.”

Leaders of liberal Jewish denominations called the death of Mandela — universally known by his clan name Madiba — a tragedy for all South Africans. They said people across lines of color and religion had bonded together as a single family watching the revered leader fade in recent months.

Echoing the uneasiness of millions of South Africans, they said Jews were hoping the country could continue on the path blazed by Mandela — and feared that the future would be less certain without his unifying presence.

“His presence is part of our national well-being and we worry that we may not be able to continue so effectively without him,” they said.

Even though Mandela had been gravely ill for months, the news of his death still stunned the nation. Sacks said he had get to come to grips with the reality that Mandela was no more.

“He was a president for all, so every community will feel bereaved for the loss,” he said. “We can take pride in the fact that so many members of our community played such prominent role in his struggle. But it’s really not a time to focus on what any one community did or didn’t do. It’s a time for us as South Africans to come together and remember what he stood for.”

Hazdan said Mandela’s enduring message would be for all South Africans — black and white, Jewish and non-Jewish — to keep working for justice in the country still wracked by poverty and inequality.

“It is for all the brothers and sisters of South Africa to continue the Long Walk to Freedom that he inspired,” said Hazdan, referring to the much-cited term for Mandela’s long imprisonment and battle for democracy.

Jewish leaders suggested it was not the right moment to talk about Mandela’s sometimes contentious relationship with Israel. The ANC forged a close alliance with the Palestinians during the struggle against apartheid, and many South Africans blame Israel for supporting the minority white regime.

Sacks said Mandela’s death should spur Jews and Palestinians to rethink their inflexible stances that have thwarted peace in the MIddle East for decades. He called on Palestinians to study Mandela’s message of respect for one’s enemies and their history.

“The Palestinian leadership has taken positions that are diametrically opposed to the approach that Mandela took,” he said. “They should look at his message and his spirit and take a new path from the one they have followed.”