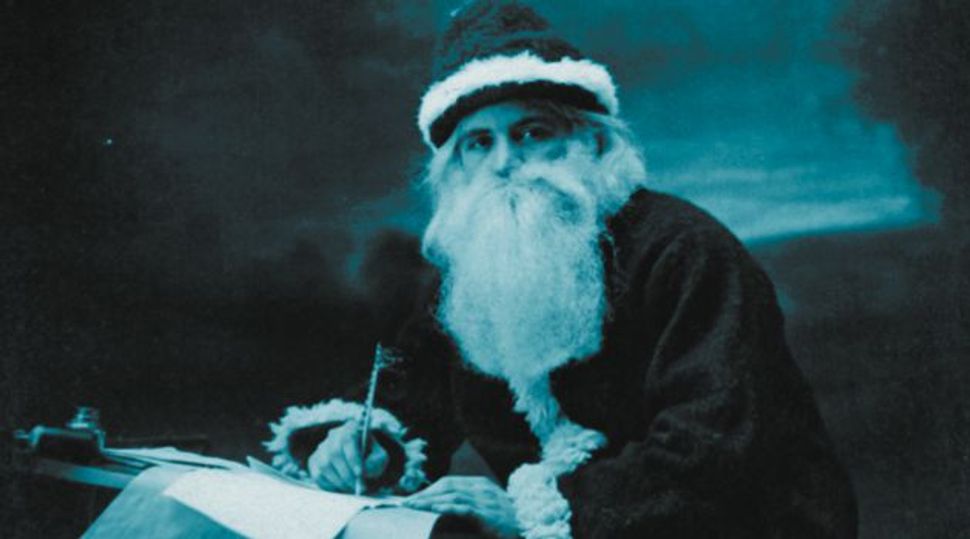 Santa! Santa! The name is joy itself to children all over America….

Except if they happen to be Jewish. Then, it’s a bit more problematic.

“I’m Jewish, but went to a church-run nursery school,” said Michelle Suconick, a 20-something publicist living in Brooklyn. “Our teacher would tell us stories about how Santa goes all over the world, delivering presents to kids everywhere, but I distinctly remember being distraught that he skipped my house.”

Puzzling over why that would be, the preschooler came up with the only obvious explanation: “Santa hates Jews.”

Yes, she pictured Santa right up there with Goebbels. So one wintry day, when her teacher announced that the jolly ol’ National Socialist would be visiting their class, Michelle went into pre-K panic. “He’s going to smell me and figure out I’m a Jew!” she remembered worrying. “He’s going to be so mad at me!”

“Not to us,” Michelle said, quivering.

Whereupon Mom had to tell her The Truth.

The Truth is not a minor thing for a child to learn; it’s a little like being entrusted with the biggest possible secret that you cannot possibly share: the location of a nuclear bomb, for instance, or Dad’s name before he entered the witness protection program. The Truth bestows upon children a sense of shame and superiority all wrapped up in — well, let’s not say a big red bow. Let’s say blue-and-white wrapping paper.

“I grew up in a school where I was one of maybe two or three Jewish kids my age, so it was really confusing to me that all my friends got to do something I didn’t get to do,” Chicagoan Carly Scaduto (née Kaufman) recalled. “So my parents took the ‘you’re-going-to-know-something-all-your-friends-don’t-know’ approach, and it kind of backfired.”

Kind of? “I remember I was hanging up my coat at school, and next to me was this boy Tom — not Jewish — and I was just like bursting with, ‘I know something you don’t know!’ And I told him point blank. No conversation. And of course — he cries.”

By the time Carly arrived home, her mom had already gotten a call from Tom’s mom — whom Carly had to apologize to directly. An adult! “That was tough,” she said. Then again, she understood. After all, Tom was the eldest child in the family, and she just might have ruined the holiday for every sibling after him, and also for the parents… and grandparents… and cousins….

Her family started looking at houses in a more Jewish neighborhood.

A similar event with a very different ending happened in another kindergarten class. “My daughter and her partner in crime — a little Jewish boy she had a crush on at the time — told all the other kids in their class that their mommies and daddies were really Santa,” Manhattan lawyer Lisa Weiss recalled. “This caused a huge amount of consternation, but their kindergarten teacher came up with a really clever way to save the magic.”

The brilliant lady brought a gingerbread man into the classroom and later told the kids he’d run away.

Of course, she’d simply moved him to another room while the kids were at recess. But she had her students go hunt for him, and when they found him in another classroom, that’s all it took. Clearly, magic was real, so Santa was, too. The Christian kids were happy, and the Jewish kids were absolved of the kind of guilt that has been haunting the lives of some of their co-religionists for decades.

My editor, Naomi Zeveloff, still winces to recall her preschool “truth rampage.” In damage control, the teacher had to tell her to shut up about Santa’s non-existence.

“I was only 5 years old,” Zeveloff said, “but I felt like the only sane person in the room.”

That’s got to leave some scars. But there’s the other kind of pain, too — the pain of wanting to believe.

“I always loved Santa, but felt guilty for obvious reasons,” said a banker who wishes to be identified by only his first name, Adam. “When I was young, my mom took me to Alexander’s on Fordham Road in the Bronx.

When it came time to sit on Santa’s lap, I told him I didn’t know if I could get a gift. He asked: ‘Why? Were you naughty?’ I said, ‘No, I’m Jewish.’ Santa said, ‘That’s okay,’ and proceeded to give me a gift-wrapped jigsaw puzzle.”

This only made Adam love Santa (and hate himself) all the more.

It actually sounds like a lot of Jewish kids have confessed their religion to Santa only to find a very understanding guy.

“I’m Jewish, too,” one Santa whispered to a friend’s younger sister. Another little girl — the niece of public relations consultantTracy Bagatelle-Black — visited Santa at the mall and told him that the Hanukkah Fairy was coming. Santa said he knew her well and that they had dinner all the time. When the little girl asked where the Hanukkah Fairy lived, Santa didn’t miss a beat: “Miami.”

Lenore Skenazy is the founder of the book “Free-Range Kids” and the blog of the same name. Her show, “World’s Worst Mom,” airs on Discovery/TLC International.