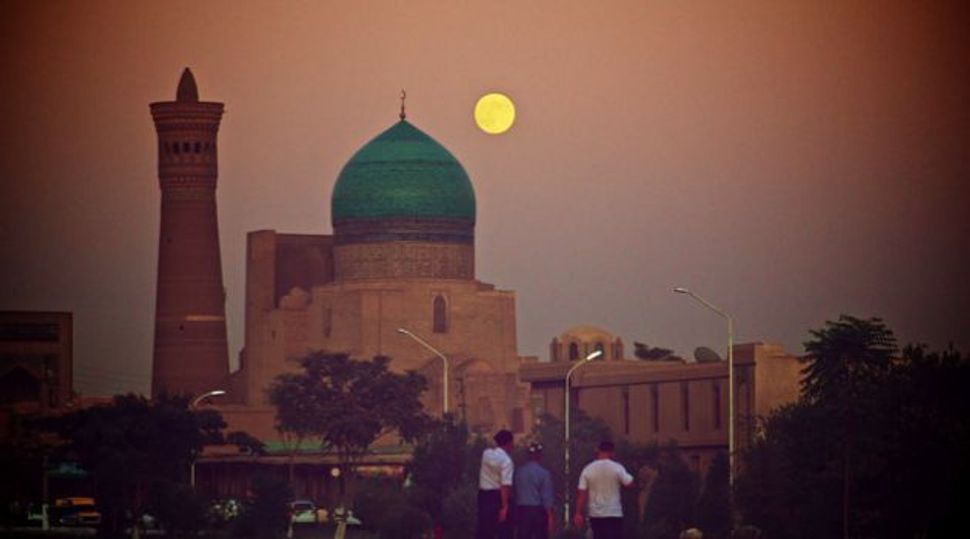 As the sun set over Bukhara, Uzbekistan on a recent Friday evening, I joined the local community in welcoming the Sabbath. This was my first time back to the historic spot on the Silk Road since I first visited in the 1990s. At that time, Uzbekistan had just gained independence in the wake of the Soviet Union’s dissolution, and the country’s 35,000 local Jews were migrating en masse to the United States and Israel. I was a doctoral student in cultural anthropology, witnessing the end of one of the world’s longest chapters in Diaspora history.

Today, 15 years since my last visit, an estimated 70 Jews remain in Bukhara. The city’s synagogue is still able to draw a minyan on Friday evenings, but just barely. Listening to the worshippers’ soulful prayers drift across the synagogue courtyard, I wondered who would come to occupy this space in the future.

Historians conjecture that Jews arrived in Central Asia along trade routes in the years following the Babylonian Exile more than 2,000 years ago. When they are all gone, will any physical signs remain to mark the memory of the vibrant, ancient community that once was?

Perhaps Akbar House — a tourist destination in Bukhara’s old Jewish quarter — serves as a premonition of what is to come.

I had visited Akbar House in 1997 at the suggestion of a friend. Back then, the home did not have a sign, let alone a name. My friend, who was born and raised in Bukhara, knew I was looking for souvenirs to bring back home to the United States and suggested I visit Mastura and her husband Akbar, who might have something appropriate for sale. I walked through the winding alleys of the mahallah (neighborhood) to their house so I might see their merchandise.

In those days, the couple was among the growing number of Muslims who had bought houses in the neighborhood as the Jews were emptying out. Why they chose to move there, I do not know. Mastura showed me traditional jewelry, hair adornments, amulets, and artifacts used by the region’s nomadic peoples.

Casually, and offering a very soft sell, she explained that the pieces were valuable antiques collected from many local peoples. I was a student with little disposable income and I left without purchasing anything. The event was unremarkable, and I forgot about Mastura and her husband altogether until my recent return to Bukhara this past October.

This time I was serving as a scholar-in-residence for a tour organized by Jewish Historical Seminars, an Israel-based organization founded by the late Hebrew University professor Yom Tov Assis. Forty individuals from America and Israel joined this particular journey to the cities in Uzbekistan that once had a large Jewish presence, including Bukhara, Tashkent and Samarkand.

One of our visits was to the Jewish mahallah. In the 1990s, when Jews still lived in the area, tourists were unlikely to venture into this neighborhood’s narrow alleyways. Today though, the Jews are gone, and the area that was once their home is dotted with bed-and-breakfasts, shops and restaurants that beckon the tourist into the intimate zones of urban life.

Once out-of-the-way and unassuming, Akbar House now announced itself with a bold-lettered sign, accompanied by a red arrow that directed tourists to the entrance. My group followed these signs, just a few paces into the Jewish neighborhood, and came upon an open door.

Mastura welcomed us into her courtyard, green with the foliage of well-tended potted plants, and cool from the breeze that blows through the portico. At first, I did not recognize the home.

We beheld the windows and doors that encircled us, each leading to a different compartment of the expansive home. With our translator-guide beside her, Mastura stood before the group, and explained that her home had once been inhabited by the Ibragimovs and the Yasayovs, two Jewish families. She herself — a Tajik Muslim — was a dear friend of these two families. When the Soviet Union dissolved and the wave of migration began, the families packed their belongings and sold their home to Mastura and her husband.

After the pair moved in, our host continued, they spent much time and energy restoring the home to its former glory, while carefully preserving its historic features. She ushered us out of the courtyard, through a small hallway and into the house.

Entering the salon, we were greeted by dramatic ceilings and elaborate wall décor that included intricate abstract design, as well as ornate Hebrew lettering. We focused on the dedication painted by the home’s first owner who inscribed his name only as “David.” He built the house in 1898, and was among the well-traveled nouveau riche Jewish merchant class, which made its fortune as the economy boomed under Russian colonial rule. We sat on rugs and pillows around the perimeter of the room, where the family had once celebrated its Shabbat and holiday meals.

My fellow tourists were riveted by the layers of history that filled this space. And there was more: Mastura’s husband collected ritual items that had been used by the Jews who had once lived in Bukhara: old books, synagogue artifacts, and even scrolls of the sacred Torah. Some of these items, Mastura pointed out, were on display in one of the room’s many niches

With her audience still captive, Mastura switched gears. She conferred with our tour-guide and translator, who announced: “We have been allowed into this private home on condition that our hostess be able to show you some of her wares. She has a small factory that produces handmade embroidered textiles that she will now display.” At this point, my memory resurfaced of Mastura, the saleswoman, with whom I had interacted in the mid-1990s.

She moved to her piles of folded material and began opening each piece. One by one she held them up for all to admire: tablecloths, pillow cases, wall hangings, and bedcoverings. She described the fabric and the threads from which each was made, the symbolism of the design, the colors, and the stitching.

I was taken aback by this sudden shift of events. Others too may have felt the disconnect between Mastura’s narrative about the Jewish home and her sales pitch. But if they did, the beauty of the items she displayed, their affordability, and the sense of comfort they felt in her presence overwhelmed.

A buying frenzy ensued. The tourists rose from their seats, gathered around, touched, discussed, conferred and bargained. By the time we left, just about every person in the group had bought at least one item. I stood by, only watching. My rough estimate is that Mastura grossed $450 that hour, significantly more than the country’s average monthly salary.

As the group began to exit the home, I went to have a closer look at the corner that housed the Jewish artifact collection. I found that the old Torah scroll, unfurled for display, was upside down, as though a metaphor for the upheaval experienced by the local Jewish community.

Saddened by the twisted use of their past towards economic ends, I also felt admiration for Mastura and her husband. They have come a long way since they were a small-time outfit. They understand the tourist industry, and know how to tell a good story to draw people in, make them comfortable, and engender their trust.

More importantly, though, on account of them, the home of a 19th century Jewish merchant, David, and his successors has been preserved.

Perhaps when the synagogue in Bukhara no longer has enough worshippers to function, it will fall to the hands of a shrewd local, who will turn it into a profit-making museum.