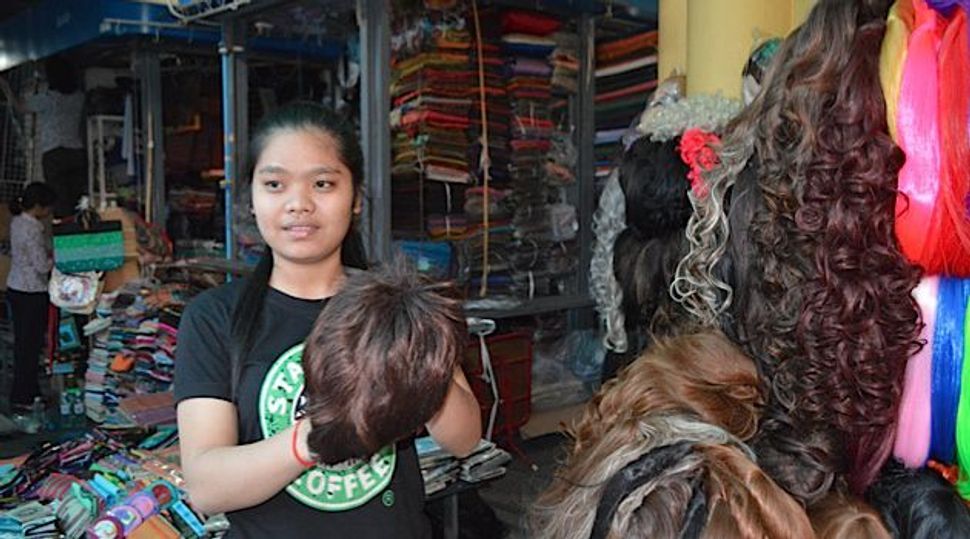 Growing Business: Jewish customers are a small but important base for companies selling hair in Phnom Penh, Cambodia. Image by Julie Masis

When Mashie Butman, the wife of the only rabbi in Cambodia, flies home to the United States for a rare visit, one of the things on her to-do list is to take care of her wig. That includes styling the elegantly cropped, light-brown head covering that the young Orthodox woman always wears in public.

“Here [in Cambodia] I don’t really trust hair salons to deal with it,” she said.

But it turns out that the hair in Butman’s wig might have originally come from the small Southeast Asian country that she now calls home.

The export of human hair from Cambodia has massively expanded in the past three years as foreign businessmen launched two large companies for whom Jewish buyers represent an important portion of the clientele.

Evan Gill, a British entrepreneur who three years ago founded the business Natural Cambodian Hair, based in Phnom Penh, exports about 4,000 pounds of hair a year, worth about $1 million. He contracts directly with two large distributors in Israel — and he told the Forward that he sells hair to Jewish buyers in both Europe and the United States. While most buyers are African women who wear hair extensions, he estimates that Jewish customers account for about 5% of his business.

“Some of my larger customers are from Jerusalem,” Gill said.

Arjuni is another Cambodia-based hair export company that opened recently. Founded and operated by Janice Wilson, an African-American businesswoman, the company is based on the principle of empowering women. It generates about $1 million in annual revenues from hair sales and employs 80 people.

According to Gill, Jewish dealers began looking to Cambodia for hair because of bad publicity that surrounded China and India, where most of the world’s hair used to come from. In particular, he said, people began avoiding Indian hair after a scandal revealed that it was sometimes cut from the heads of dead people.

Although there’s no religious prohibition against hair from the dead, the Jewish community is particularly concerned with the ethics of the hair trade because the Nazis cut the hair off Jewish prisoners before sending them to the gas chambers and then, allegedly used the hair for clothing.

“They couldn’t trust the source from India and China,” Gill said. “So the premium Jewish market started to deviate. They needed to find a new source.”

In Cambodia, Gill said, the hair business benefits the women in the countryside, in some cases even giving them an alternative to sex work. A Cambodian woman can get between $20 and $35 for cutting off her locks, he said. “You have to understand that a woman from the province can have $50 and feed a family of six for two months,” he said. “I’m not saying the hair industry is going to save the girls — but we’ve seen that it’s an alternative for some women.”

Sometimes, being able to sell hair can even save a life.

Alex Bachelet, a French intern at a children’s cardiac hospital in Cambodia’s capital, said one of his colleagues recently met a child from a rural family whose mother and sisters all sold their hair to pay for transportation to the hospital. When asked to come back for a follow-up appointment, the child’s parents answered that they wouldn’t be able to afford another trip until their hair grew back.

Upon hearing this story, Butman said she felt both happy and sad.

“It’s very nice of them — that they’re willing to go that far to help their brother and to bring them better health,” she said. “But I just feel bad about the poverty.”

While religious women who cover their hair are an important group of wig buyers, religion is not the only reason that Jewish women buy wigs, Gill said.

“There is also an element of sickness. We sell a lot of hair to cancer centers to women who had chemo. The cancer centers are now looking for more authentic hair than what they used before, because patients’ demand has increased,” he explained.

In recent months, the Chabad Jewish Center of Cambodia welcomed two businessmen who came to the country to buy hair. Both of them Orthodox — one from Ukraine, the other from Israel — the businessmen dined at Chabad on a Friday evening, but neither wanted to speak on the record about why he chose Cambodia to purchase the raw material for wigs and extensions.

Butman said she wasn’t surprised to meet Jewish hair buyers in Cambodia, “because people come here to try their hand at all sorts of things.” Still, she said, she is now looking at her wig in a different light. “I don’t even know where the hair [in my wig] came from,” she said. “Now I’m curious to find out.”