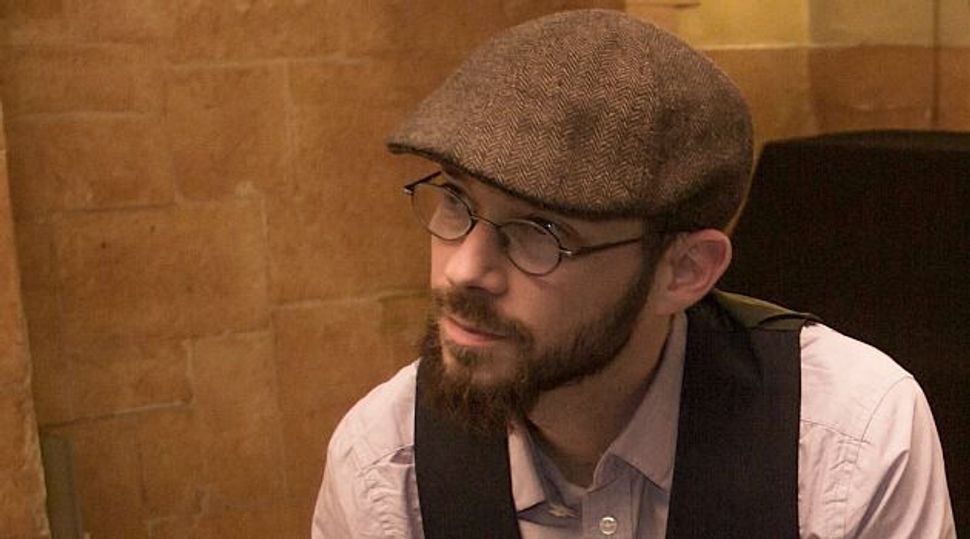 Stay Away: David Harris-Gershon signs copies of his book, ?What Do You Buy the Children of the Terrorist Who Tried to Kill Your Wife.? He hoped to bring the book?s message of reconciliation to the University of California at Santa Barbara, but the Hillel chapter scrapped his appearance. Image by Austin Hill

It all started innocently enough: The Israel Committee of Santa Barbara, Calif., which works with the local chapter of Hillel, American Jewry’s on campus program for students, invited author David Harris-Gershon to keynote its annual Israel educational event in April.

Harris-Gershon expected to talk about his recent book, which tells the tale of his reconciliation with the family of a Palestinian terrorist who nearly killed his wife.

Yet after extending the invitation, leaders of the Hillel chapter learned that Harris-Gershon, a self-proclaimed progressive Zionist who supports Israel as a Jewish state and backs a two-state solution, had also publicly endorsed the Boycott, Divestment, Sanction movement. On Jan. 8, they decided to rescind the invitation, citing the still-raw atmosphere following a campus push for divestment from Israel last year.

That stunned Harris-Gershon, particularly given that the focus of his talk was to be on his book – not boycotting Israel.

Thus, just one month after a feud broke out between Hillel International and its Swarthmore College chapter over its pro-Israel guidelines, began the latest chapter in the ongoing controversy on another college campus some 3,000 miles away.

“It’s an example of how far an organization can go to limit dialogue and debate based upon Hillel International’s guidelines,” said Harris-Gershon. “How on earth does Hillel intend to actually advertise itself as an open place for university students when large swaths of university students won’t [fit in]?”

The author even wrote a statement expressing his support for Israel’s right to exist as a democratic Jewish state, a document he called a “loyalty oath.” He says he did so at the behest of organizers; they deny asking him to do so. Either way, it didn’t sway them to change their minds.

Rabbi Evan Goodman, executive director of the Hillel chapter at the University of California, Santa Barbara, strongly stood by the decision, noting it was taken against the backdrop of a tense environment on campus following debate over a resolution supported by pro-Palestinian groups calling on the University of California to divest from specific international companies deemed linked to the Israeli occupation.

“The notion of bringing a speaker to the Santa Barbara Hillel at this time for our major all-day Israel teach-in event who had prominently connected himself with boycotting or divesting or sanctioning Israel was disturbing to our students,” Goodman said “We thought it outside of what was appropriate for us or our campus to be hosting at this time.”

The executive committee and student board voted unanimously to bar Harris-Gershon from speaking.

Santa Barbara Hillel’s student president Molly Morrison said allowing a pro-BDS speaker so shortly after the divestment debate would be inappropriate – regardless of the topic of his discussion.

Even if Harris-Gershon were to speak only about his book, Morrison predicted, discussions about boycott and divestment could easily surface — a debate she termed a “hurtful distraction.”

“We felt that given his outspoken online posts in support of divesting from Israel, someone would certainly bring it up,” she said. “Once it would come up, there would be no way to keep it from being a hurtful distraction.”

Peter Melnick, the chairman and co-founder of the Israel Committee who initially invited Harris-Gershon to speak, expressed disappointment at the decision. Melnick, who is also a Santa Barbara Hillel board member but not a member of the executive board that voted to scrap the invitation, qualified his statement by adding that he understands that it is within Hillel’s right to decide who speaks at events it sponsors.

The Israel committee has not yet decided if it will invite Harris-Gershon independently of the planned event with Hillel.

The move comes as controversy continues to rage over Swarthmore Hillel’s proclamation that it is the first “open Hillel,” welcoming critics of Israel including anti-Zionists and those who support the boycott Israel movement.

Hillel International has drawn both loud praise and criticism for its strong condemnation of the Swarthmore group and its insistence that member groups abide by its guidelines. The Hillel guidelines forbid chapters from working with, housing, or hosting organizations, groups, or speakers that “support boycott of, divestment from, or sanctions against the State of Israel.”

Leaders of Jewish Voice for Peace say their organization has been blocked from working with Hillel for its support for BDS. Hillel chapters across the country have also scrapped planned events that included collaboration with pro-Palestinian student groups over the guidelines, the New York Times reported.

Some progressive Jews critical of Israel say the guidelines have driven them away from the campus movement.

During the anti-Israel divestment campaign last year, Andrew Farkash says that he did not feel welcomed or able to freely express his beliefs at Santa Barbara Hillel, leading him to distance himself from the organization.

“I think it should be an open space,” he said. “I think individuals or speakers who criticize Israeli policy are not anti-Semitic and not all Jews are Zionists. They should be accepted and welcomed as well.”

Eric Fingerhut, who took over as executive director of Hillel International last summer, approved of the way the Santa Barbara chapter handled the Harris-Gershon affair, said Ron Gans, president of UCSB Hillel’s board of trustees.

Harris-Gershon says he had hoped to bring an important message of reconciliation that is at the heart of his memoir, “What Do You Buy the Children of the Terrorist Who Tried to Kill Your Wife?”

The book is about his attempts to “heal” by understanding the life and motivations of the Palestinian terrorist who nearly killed his wife in a bomb in 2002 at Hebrew University’s cafeteria. He later met with the attacker’s family.

Harris-Gershon says the botched handling of his planned speech at Santa Barbara reflects problems endemic within the Jewish community as a whole, and Hillel in particular.

“The book I was scheduled to speak about hinges on the idea of reconciliation,” he said. “Ironically, it’s a concept I believe is now relevant to this situation, and I hope the [Santa Barbara] Hillel community will find it in their hearts to drop the fear and open themselves to a productive conversation with me.”