Rabbis Shift To Say ‘I Do’ to Intermarriage 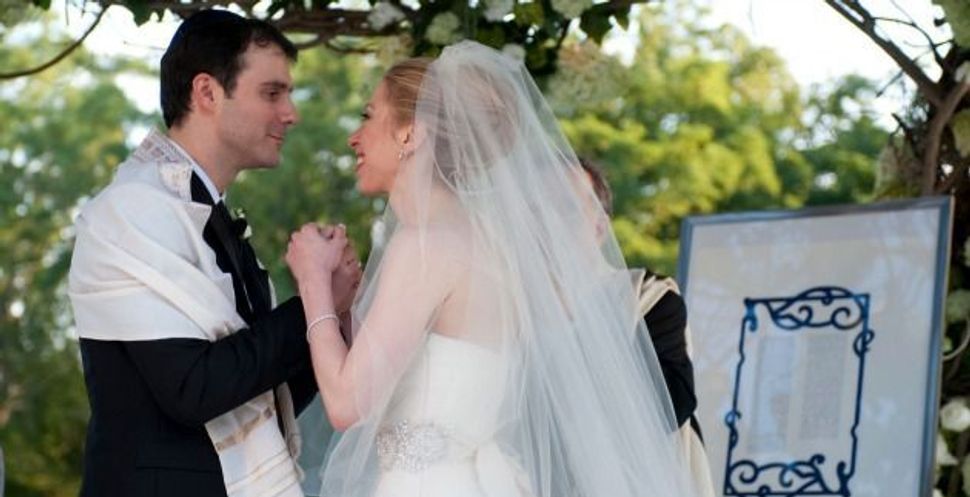 When Rabbi Daniel Zemel started his career, back in the past century, the last thing he thought he’d ever do was perform intermarriages.

But as the years passed, Zemel, who leads Temple Micah, a Reform congregation in Washington, found that maintaining his strict rule on this issue became ever more difficult.

“It got harder and harder to say no,” he recalled in an interview with the Forward, as he encountered situations and realities that increasingly challenged his beliefs and the teachings of his mentors. Eventually, in January 2009, Zemel wrote a lengthy letter to his community, explaining that his deliberations were over. He would no longer turn down requests to conduct interfaith weddings for members of the congregation.

“I wanted my Judaism to make sense to me, and I wanted to help create [a] Judaism that makes sense to Americans,” he said, reflecting now on the decision he made five years ago.

Many Reform rabbis, and a few Conservative ones, have gone through a similar process in recent years. And for each, crossing the Rubicon was a result of intense personal wrestling.

Reform rabbis in particular receive no clear guidance on this issue from their denominational leaders. The decision of whether to officiate interfaith marriages is left to the clergy themselves and to their understanding of Jewish theology, of the right path for American Judaism and primarily of the needs of their own community. For some, like Zemel, coming out in support of marriage of Jewish and non-Jewish couples took the form of a letter to the community. Others took to the pulpit during prime-time High Holy Days sermons to explain their move.

“After long and deliberate consideration, I have reached this decision: Going forward, when a Jew and a non-Jew in our community here at Temple Israel come to me and state that both partners are willing to commit to a Jewish future, Jewish education for their children and the creation of a Jewish home, I will officiate happily at their chuppah,” Rabbi John Rosove stated in his 2012 Rosh Hashanah sermon at Los Angeles’s Temple Israel of Hollywood.

“I was extremely nervous before this sermon,” Rosove recalled, but his congregants’ response left no room for doubt that his move struck the right chord with the community. “People stood up in the middle of the Rosh Hashanah sermon and started applauding and shouting,” he said. For weeks afterward, congregants attending services or dropping off their children at the nursery school stopped Rosove to express their support for his decision.

It was an issue Rosove had been struggling with for nearly 15 years, ever since he attended the wedding of a family friend who married a non-Jew. “It was a relationship of love,” he said.

Since he attended the wedding, an internal voice calling on him to reverse his refusal to officiate interfaith weddings became louder, until he concluded that the fate of Jewish individuals takes primacy over warnings from demographers that intermarriage will bring about the demise of the Jewish people.

“When I understood that what’s important for me is the relationship between two people in the context of Jewish life, I knew what I should do,” Rosove said.

Rabbi James Ponet’s deliberations were similar. The Jewish chaplain of Yale University explained in an interview that his refusal early on to officiate interfaith weddings was driven by two concerns: “That I would be contributing to the demise of American Judaism, and that I would be chastened by colleagues.”

The stakes for Ponet were probably higher than for others. His decision in July 2010 to perform the wedding of Chelsea Clinton and Marc Mezvinsky made him the rabbinic public face of interfaith marriages. “I outed myself,” he said, “and I knew it would impact the dialogue.”

Reaction to the high-profile celebrity interfaith wedding was mixed. Many expressed their support, while others saw it as a “terrible betrayal,” he recounted. Looking back, Ponet believes that performing the wedding was the right move, and that sticking to old beliefs about intermarriage contradicts the rabbinical mission of attending to the Jewish needs of Jewish people. “We were neglecting Jewish individuals for the sake of some theory of demography,” he said.

The demographic predictions that Ponet and others refer to are based primarily on studies showing that intermarriage is a key indicator for the loss of Jewish identity in the second generation. The recent survey by the Pew Research Center does find an increase in Jewish identity among individuals born to interfaith families in recent years, thanks, presumably, to a greater effort on behalf of the Jewish community to welcome intermarried families. But the numbers still show a significant difference between Jewish identification and behavior of in-married and out-married families.

“I know the statistics that only 25% of children of intermarried families will identify as Jewish, but I want to keep these 25% in our community,” Rosove said.

The Reform movement, America’s largest Jewish denomination, has become increasingly tolerant of rabbis officiating interfaith weddings. Though the movement does not have a clear policy on the issue, it is estimated that half of the 2,000 members of its rabbinic arm, the Central Conference of American Rabbis, now perform marriages between Jews and non-Jews.

In a January 14 telephone interview with Forward Editor-in-Chief Jane Eisner, Rabbi Rick Jacobs, president of the Union for Reform Judaism, said that he had never performed an interfaith wedding during his many years as a pulpit rabbi. Asked if he would now agree to do so, Jacobs responded, “I probably would.”

But in Conservative Judaism, American Jewry’s other major liberal religious stream, rabbis struggling with this issue face a more complicated situation. The movement maintains an absolute prohibition against rabbis conducting interfaith ceremonies — or even attending such a ceremony. Violators of this ban are subject to being thrown out of the Rabbinical Assembly, Conservative Judaism’s rabbinic organization.

Rabbi Chuck Diamond of Pittsburgh’s Tree of Life-Or L’Simcha Congregation parted ways with the R.A. several years ago, and therefore was not obliged to follow the movement’s ban on officiating interfaith weddings. But it was only a trip to Ukraine last year that convinced him to take the plunge. After visiting Babi Yar, where more than 30,000 Jews were murdered by the Nazis, and observing the small Jewish community left in Ukraine, one of the fellow rabbis participating in the tour quoted Israeli president Shimon Peres saying: “It’s not important if your grandparents are Jewish. What is important is if your grandchildren are.”

“I thought about it long and hard,” Diamond said, and after “throwing out feelers” to gauge his congregation’s response, Diamond announced in his Yom Kippur sermon that he would agree to perform some interfaith weddings. He is now working with two couples planning their upcoming weddings. The only condition the Conservative rabbi has is that “they should commit to running a Jewish household, raising Jewish children and to learn with me what that means.”

His denomination, Diamond argued, is trying to welcome interfaith families before the wedding and after it, “but to me it seems doomed to failure, because they are not there on the day of the wedding.” Diamond said he was “trying to save the next generation of Jews in my small corner of the universe.”

But Rabbi Brad Artson, dean’s chair of the Conservative movement’s Ziegler School of Rabbinic Studies, argued that this approach has been proved wrong. Ironically, he cited the same Pew data that Rosove cited as his justification for performing interfaith marriages — that only 25% of children of intermarried families identify as Jewish.

“The results [of interfaith marriage] are the end of Jewish continuity,” said Artson.

The Conservative educator also noted that the notion of “leaving the door open” to interfaith couples in order to promote subsequent affiliation with Judaism has also been shown to be insignificant in its impact. “I don’t dispute the fact that most Jews are doing it,” he said of the recent finding that 58% of Jews marry outside the faith, “but the consequence of intermarriage is a disaster. “ Couples of different faiths, he suggested, should have a civil marriage and should be welcomed into the Jewish community, even in the case of Conservative communities. But rabbis that choose to marry them “are taking the easy way out.”

Since there are no clear guidelines for performing interfaith weddings, rabbis are on their own in deciding the nature of the ceremony. Most require the couple to express interest in raising their children Jewish, though the level of commitment may vary. Many rabbis refuse to officiate weddings taking place on Saturday, and most will not agree to co-officiate with a clergy member of a different faith.

Diamond described the wedding he plans to officiate as a “civil ceremony with a Jewish flavor.” Ponet married Clinton and Mezvinsky alongside a Methodist minister. Zemel performs a fully Jewish ceremony, with a chuppah and the seven blessings, though he makes one change: Instead of blessing the newlywed couple “in the religion of Moses and Israel,” he says he does it “in the custom of Moses and Israel.”

All the rabbis interviewed said that they were pleased with their decision to perform interfaith weddings. None has heard from others who regretted the move. For some rabbis, the only question is why they hadn’t taken the plunge earlier.

“Maybe I could have done it a year or two earlier, but I wasn’t ready,” Diamond said.

Rabbis Shift To Say ‘I Do’ to Intermarriage