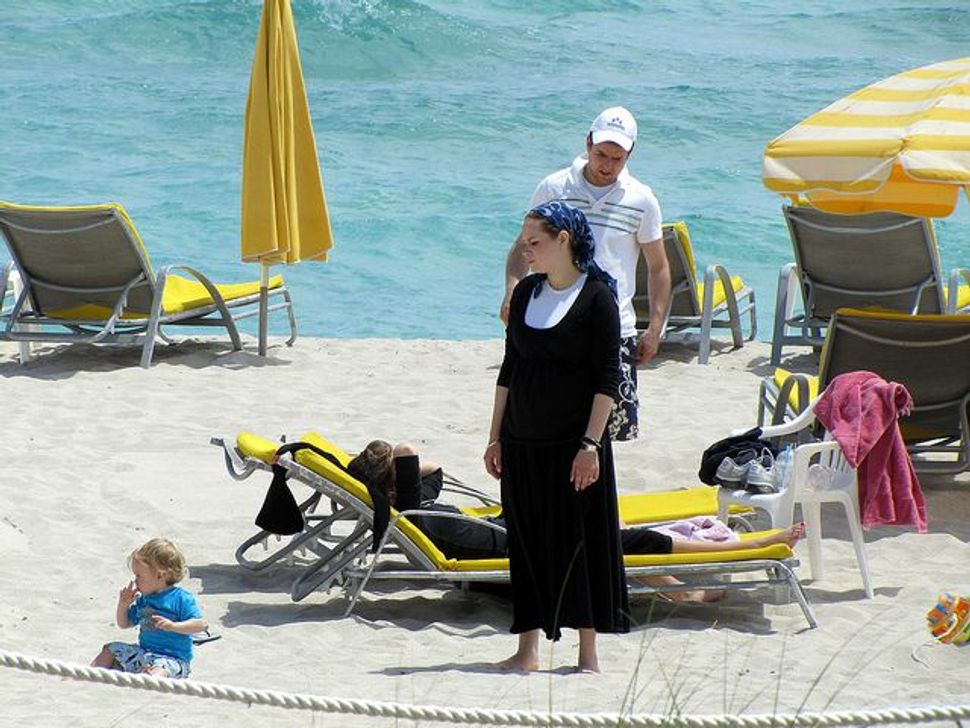 Beach Day: An Orthodox Jewish woman takes in some sun in Miami. Image by Flickr

(JTA) — When Alejandra Schatzky-Cohen and her husband decided to enroll their children in a Reform Jewish day school in North Miami Beach five years ago, they had more on their minds than the average prospective day school parent.

The family was living in Caracas at the time and the situation for Jews in Venezuela was becoming increasingly precarious. The city’s Hebraica school and Jewish cultural center had been on the receiving end of multiple raids by the national police over the previous few years, anti-Semitic propaganda was becoming commonplace on state-controlled media, and President Hugo Chavez had just expelled Israel’s ambassador.

The streets of Caracas were so dangerous that Schatzky-Cohen’s kids had to be shuttled to and from school in a hired car with bulletproof windows tailed by a second vehicle to thwart attempted kidnappings.

After years of hemming and hawing, they finally took the step that thousands of other Latin American Jews have taken over the past decade and a half: They moved to Miami.

“We moved to a house near school, and now my son can walk on his own to the school and the JCC and back,” Schatzky-Cohen told JTA. “We needed to get out of Venezuela. My kids could not grow up in that environment.” At their new school, Jacobson Sinai Academy, Schatzky-Cohen’s four children have gotten more than just a safe haven: They’ve found a place with both a Latin and Jewish flavor.

An estimated 75 percent of Sinai’s 440 students come from Latin American families, and most are relative newcomers to America.

There are Jews from Mexico City who sought refuge from a deteriorating security situation. There are Venezuelans who left during the nadir of Chavez’s rule, along with more recent arrivals fleeing the violent crime and economic problems that followed his demise. There are Argentines who came a decade ago seeking escape from an economic crisis. Colombians, Peruvians, Panamanians and Cubans have come for reasons ranging from security to family to livelihood.

The Latin influx has helped turn Miami into one of America’s most unusual Jewish communities.

“We’ve had these seismic trends that affect the demography of Miami-Dade Jewry over the decades that I don’t think many Jewish communities have experienced,” said Jacob Solomon, CEO of the Greater Miami Jewish Federation.

That’s immediately apparent at Sinai Academy, from the mix of languages on the playgrounds and in the classrooms to the tight security at the school’s entrance – a concession to anxious parents long accustomed to worrying about security. (Last year, two students had relatives back home who were kidnapped for ransom.) The school has students from 17 countries, including Russia and Israel.

Latin Jews have been a boon to Sinai. The number of students has swelled by more than 50 percent since 2000, and there’s now a wait list to enter preschool despite tuition fees ranging from about $16,000 in kindergarten to $24,000 in eighth grade.

As recently as the late 1990s, alumna Melissa Neuhut recalls, hers was one of just three Latin families in the school. Just eight years ago, teachers with Latin roots were told to refrain from speaking Spanish on campus, according to one administrator.

“It’s been an interesting transition for the school,” said Nancy Posner, Sinai’s head of school. “We want to make them American, but we want them to keep their cultures.”

Sinai hasn’t been the only Miami-area beneficiary of Latin immigration. On the other side of the 14-acre JCC that abuts the school sits the Scheck Hillel Community School, an Orthodox-run institution nearly twice the size of Sinai that also is mostly Latin.

It’s not surprising that many Latin Jewish immigrants are opting for day school education: In many Latin American countries, Jewish day school enrollment is de rigueur even for non-observant families. What’s unusual in Sinai’s case is that so many Latin families are choosing a school affiliated with Reform Judaism, a movement with which few Latin American Jews are familiar.

Sinai parents such as Liliana Eidelstein say the Reform-affiliated school is much more reflective of the liberal Judaism they practice than the Orthodox-oriented schools in Latin America to which they used to send their children.

“We love the way Reform Judaism emphasizes community service and tzedakah and all those things you don’t always get at a Jewish school,” said Eidelstein, who moved here from Panama 11 years ago. “It’s about bringing your Jewish values and traditions into the greater community.”

Just as important for many Sinai families is preserving their Latin ties, something they say is more likely in Miami than in other American cities. Aside from the ubiquitous Spanish culture, Miami’s proximity to Latin America enables many immigrants to commute during the week to maintain their livelihoods back home.

Ilan Naibryf, 14, an eighth-grader and president of the student council, has a typical Sinai background. His family immigrated to Miami from Argentina when he was 2, but his father still commutes for work to South America, where he is a carpet tile manufacturer. Ilan’s mother, Ronit Felszer, teaches in one of the Spanish-immersion early childhood classes. At one point, the family pulled Ilan out of Sinai and tried public school, but quickly found it did not suit them.

“It’s not just the academics at this school,” Felszer said. “It’s the community.”

More than an hour before dismissal time, parents begin showing up at Sinai to chat in a picnic area near the main entrance. At school celebrations and cultural events, parents bring in homemade empanadas, chorizo or arepas. Many school families have bought homes near the school, creating a real community and, buyers say, boosting surrounding real estate values.

In the meantime, Sinai is planning for growth, with expansion slated for the early childhood program and middle school, as well as early talk of starting a high school. If they succeed, it would be the only Reform Jewish high school in the United States.

“We have this exciting new population,” said Posner, the head of school. “It’s a little bit of a laboratory to see when a new community becomes a part of an existing community.”