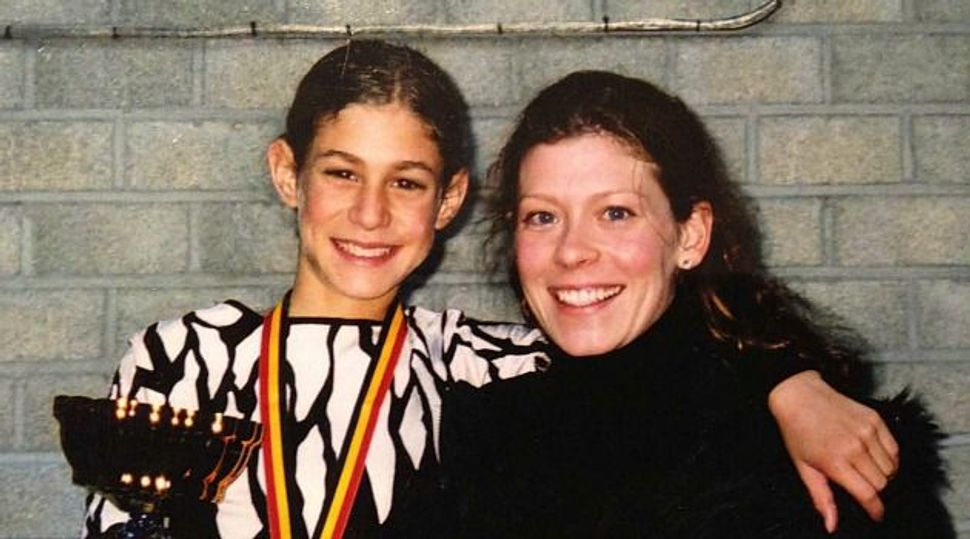 Jason Brown and his coach, Kori Ade. Image by courtesy of marla brown

As with most sports, competitive figure skating at the Olympic level demands a single-minded focus and devotion that are all-consuming for most of the young men and women who attempt it. But 19-year-old Jason Brown has another life, within the Jewish community of his hometown of Highland Park, Ill., that complements this.

In fact, noted his mother, Marla Brown, while most young skaters aiming for championships train all summer, Brown went instead to overnight camp for five years at Camp Olin-Sang-Ruby, sponsored by the Union for Reform Judaism.

The role of Jewish values in keeping Brown’s life in balance has come out in many ways. For his bar mitzvah, Brown skipped the fancy party in lieu of a community service project. A couple of hours after the synagogue service, the Brown family bused some 300 guests to a local public school.

“I worked with Chicago Cares,” Brown recalled. “We renovated a school with all of the guests from the party.”

After the work was complete, Brown and his friends celebrated with a small dance party in the gym.

More broadly Brown unpretentiously sums up his devotion to skating on his Twitter profile, where he describes himself as “just a kid who loves to skate…and happens to have a ponytail.”

In Boston last month at the 2014 U.S. Figure Skating Championship both the skating and the ponytail were on vivid display. The audience in the arena wanted to stand up even before Brown completed his bravura performance. As he launched into his final round of spins, you could hear the screaming get louder as the crowd members got on their feet. By the time he struck his final pose in the middle of the ice, the entire arena was up and cheering. Brown, his hair slicked back into a low-slung ponytail, seemed floored by the crowd’s response as he took a bow.

Brown’s triumph in Boston earned him the highest score in the free skating competition and a spot on the U.S. Olympic team. On YouTube, his achievement quickly went viral, racking up more than 3 million views after being featured on BuzzFeed. (And his ponytail now has its own Twitter account, created by one of Brown’s fans.)

“It’s so surreal. I still can’t wrap my brain around it,” the young skater marveled when asked about his sudden Internet fame. “I [still] freak out when I get a hundred hits on YouTube. And the biggest thing before this was 8,000 views [on YouTube].” 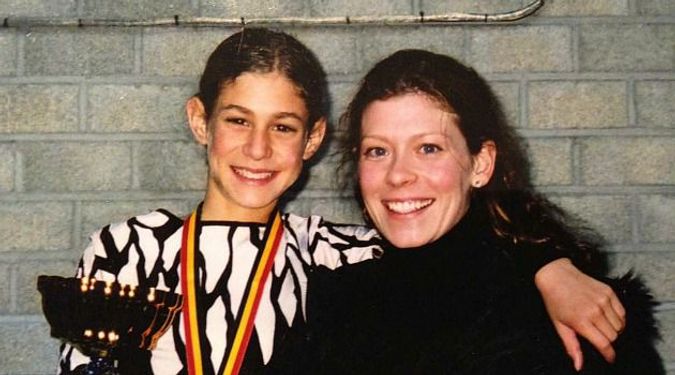 Jason Brown and his coach, Kori Ade. Image by courtesy of marla brown

The reason for his sudden popularity wasn’t just his Boston program, though it was set to a crowd-pleasing number from “Riverdance.” (He skates his equally popular short program to Prince’s “The Question of U,” and the back of the costume is embroidered with the insignia of the music legend.) It is the way in which he opens up on the ice, the sense of joy he brings to his skating.

“I think that Jason touches people in an emotional way because he’s a very unpretentious, genuine kid,” Marla Brown said. “I think that he was kind of able to make that connection with the audience, which is very rare.”

Though Brown has been skating since the age of 3, he wasn’t been groomed to be a champion. The middle child of three, Brown simply followed his older sister into the sport. He spent his childhood skating but also participating in other sports, such as soccer and track and field.

“None of us was really looking for this [skating] to become as big as it is,” his mother said.

By the time Brown moved on to high school, his focus narrowed to his studies and to skating. He spent about three to four hours a day on the ice and participated in off-ice workouts, such as strength training and dance classes. There he has honed his trademark flexibility, hitting positions on his spins that make female skaters envious.

He also started climbing the junior ranks of figure skating, winning bronze and silver at the world junior championships in 2012 and 2013, respectively. Brown also won the Junior Grand Prix final in 2012. (The Grand Prix is a series of international skating competitions.) It was fresh off those successes that he embarked on his first senior season, which also happened to coincide with an Olympic year.

But Brown didn’t start the competitive skating season with his sights set on Sochi. Back in May 2013, during an interview on the blog The Skating Lesson, he talked about a “five year plan,” with the goal of peaking at the 2018 Winter Games, when he will be 23. The early 20s tend to be when male singles skaters are at the zenith of their powers.

But his longtime coach, Kori Ade, and his choreographer, Rohene Ward, encouraged Brown to think about this Olympic cycle, too. “The whole season, my coach and choreographer have been ‘Sochi 2014, Sochi 2014. Get your brain wrapped around that,’” Brown recalled.

Part of the reason that Brown was initially skeptical as to whether he had a chance to make the 2014 team is that he lacks a quadruple jump, which is the holy grail of men’s figure skating. The United States Figure Skating Association had initially indicated that it wouldn’t consider taking a skater who couldn’t do the jump in a competition. Brown has landed some in practice, but not consistently. He didn’t attempt it in Boston, and he doesn’t plan to do it in Sochi, either.

It was his performances on the Grand Prix circuit this season — his first as a senior — that started to give Brown confidence that he could be in the mix for Sochi even without the jump. “I got a medal at the Grand Prix in Paris. It was a turning point, realizing that, you know what? Maybe it’s not all about the quad,” Brown observed.

At the national championships, Brown faced off against skaters who had mastered the quad, including Max Aaron, the defending national champion, who is also Jewish. After a shaky short program, Aaron finished the long in third place, behind Brown. The United States had only two male figure skating tickets for Sochi, and Aaron didn’t make the cut.

In many ways, Aaron and Brown, despite their shared Jewish heritage, are on the opposite ends of the figure skating spectrum. Aaron started out as a hockey player and then added figure skating to his repertoire, finally choosing between the two after a back injury. (It’s not exactly the plot to the ’90s movie “The Cutting Edge,” but it’s close.) His hockey background informs his figure skating strengths: jumping ability and sheer athleticism. He performs two quad jumps in his long program, but hasn’t mastered the subtleties of edges and expression.

Brown, on the other hand, is renowned for his artistry. During his footwork sequence to “Riverdance,” Brown opens his arms wide for a moment as if to embrace the spectators, who respond in kind. His ability to win over an audience is not new — it was evident even back in 2010, skating to Tchaikovsky at junior nationals. Once again, the crowd was on its feet before Brown completed the revolutions of his final spin, a fact on which the commentator remarked.

By his side at that competition and all the others was his coach, Ade. Back in 2010, she was pregnant, but had her labor induced in order to be with Brown during the junior nationals event — a fact the skater mentioned on camera in the “kiss and cry” area as he waited for his scores to come up.

The loyalty goes both ways. Ade was only 26 when she began working with the 5-year-old Jason. As he advanced through the ranks over the years, it was suggested that perhaps he should switch to a better-known coach to make it to the next level. Figure skating is a sport in which the reputation of an athlete’s coach plays a role in scoring, and in which behind-the-scenes politicking is common.

But Brown never considered leaving Ade. “They were a team. Skating for Jason was as much about skating with Kori as just skating,” Marla Brown said.

Ade asked for help when she needed it. “If there was something [Kori] didn’t know, she got help,” Brown’s mother said. “She sought outside coaches to help her and Jason learn to do whatever the skill was. They really did grow together.”

In April 2013, after Brown graduated from Highland Park High School, the two (along with Ade’s family) moved cross-country to continue their work together.

Before their journey could take them to Sochi, Brown, his mother and Ade made a stop in Los Angeles to film an interview with Arsenio Hall. Marla Brown had been one of the founding producers of Hall’s original Fox network talk show, which he has recently revived in syndication. Speaking with Hall backstage, she remarked: “Who could’ve imagined that 25 years after we created the show, I’d have a son who’d be an Olympian appearing on the show? What are the odds?”

Pretty slim. And the odds of his medaling in Sochi are even slimmer without the vaunted quadruple jump. Brown hopes to simply repeat what he did at nationals on the Olympic stage. “To go there with all of the media and cameras; to take everything in, but at the same time do the program I’ve been training,” he said.

If he does that in Sochi, the audience will once again be on their feet, probably before the music ends.