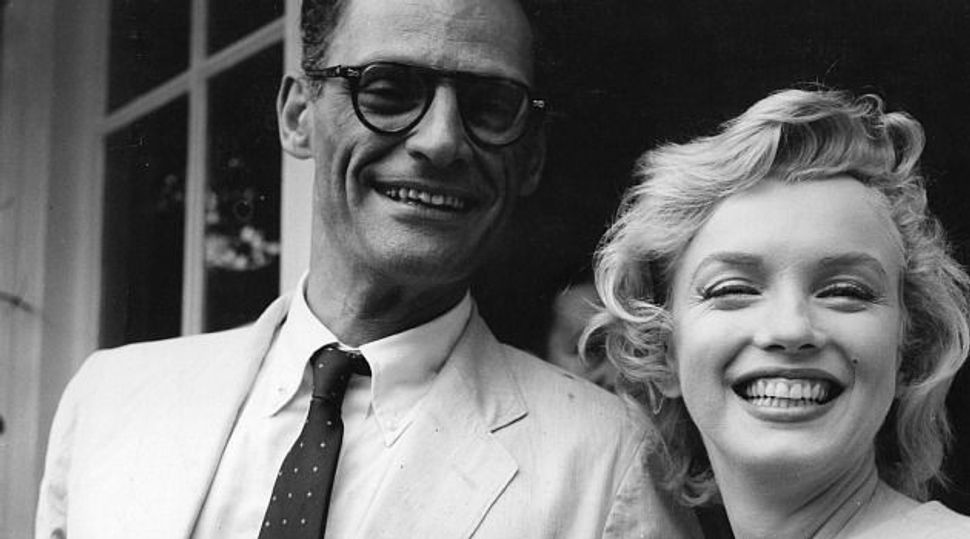 Blond on His Arm: Playwright Arthur Miller?s relationship with starlet Marilyn Monroe was long seen as the paradigm for intermarriage. Not any more. Image by getty images

That stereotype may have once reflected a demographic reality, according to a new analysis of data from the Pew Research Center’s 2013 study of American Jews. But not anymore. Today, a Natalie Portman is as likely to marry a Benjamin Millepied as a Marc Mezvinsky is to marry a Chelsea Clinton.

“Before 1970, men were heavily leading women in intermarriage,” said Steven M. Cohen, a leading sociologist of the Jewish community and a professor at the Hebrew Union College-Jewish Institute of Religion, who analyzed the data for the Forward. “[That] is no longer the case.”

The data are based on the 2013 Pew survey that polled nearly 3,500 Jews, the largest survey of American Jews in more than a decade. The findings reflect only marriages that were ongoing at the time of the survey. And previous studies contradict parts of this latest analysis: The 2000 National Jewish Population Survey found relative levels of intermarriage among men and women to be flat going back decades.

Still, what’s clear from the new analysis is that traditional stereotypes of Jewish men marrying out and Jewish women marrying in are long outdated — as are assumptions about intermarried Jewish women raising their children Jewish.

“The context… has to do with more women obtaining college degrees and graduate degrees and working in the professions, and being in a context where they would meet non-Jewish men,” said Keren McGinity, a research affiliate at Brandeis University’s Cohen Center for Modern Jewish Studies at Brandies University and the author of the forthcoming “Marrying Out: Jewish Men, Intermarriage, and Fatherhood.”

Jewish women who intermarried in the 1950s often faced strong sanction from their families, according to McGinity. “Sometimes that anti-intermarriage sentiment among Jewish families overpowered the more pressing domestic ideas that women should get married,” McGinity said. One response, McGinity said, was for intermarried Jewish women to join Unitarian Universalist congregations, a liberal faith that can incorporate Jewish traditions.

Those attitudes changed by the 1970s — the period in which Cohen’s analysis shows intermarriage rates between men and women leveling out. McGinity said Jewish women who intermarried in those years began to insist on their Jewish religious identities instead of adopting new ones. “Women who intermarried in the 1960s and 1970s and later, were that much more adamant about not being mistaken for a Christian,” McGinity said.

Cohen theorized that the narrowing gap among men and women in the Jewish community could be tied to the changing status of Jews in the United States. “It may be the case that [as] Jews move from low status to high status, men from other groups seek out Jewish women,” Cohen said.

That hypothesis appears to draw from the sociologist Robert Merton’s status exchange theory, proposed in the 1940s. Merton suggested that interracial mating involves a sort of swap of racial status for economic or educational status. Sociologists have long employed his theory to explain Jewish intermarriage, but now it would seem to apply to women no less than men.

Other experts suggested that the shift in proportions of men and women who intermarry has more to do with shifting roles for women. “It may be that men felt freer to make these kinds of choices longer ago and that women are becoming freer now,” said Jennifer Thompson, a professor of Jewish studies at California State University, Northridge. “The Jewish women’s movement got off the ground in the ’70s, whereas we were already talking about men intermarrying in the ’20s, ’30s, ’40s, ’50s, ’60s — so maybe it took a while for women to catch up to looking at it in this more individualistic way.”

The new analysis didn’t surprise Steven Bayme, director of the Contemporary Jewish Life department of the American Jewish Committee. “The fact that the gender gap has disappeared is not at all a surprise,” Bayme said. “The real point is the growing acceptability of mixed marriage.”

As for Cohen’s finding that intermarried Jewish women and men are both unlikely to raise their children as Jewish, Bayme said that the implications for Jewish communal policy are “very clear.” “We cannot afford to give up on endogamy, on encouraging Jews to marry other Jews,” Bayme said. Beyond that, he advocated encouraging non-Jewish partners to convert, and that the Jewish community welcome intermarried families.

McGinity, for her part, suggested that these decisions may be beyond Jewish communal control. “I think it’s important to remember…. why people intermarry,” she said. “They fall in love with someone.”