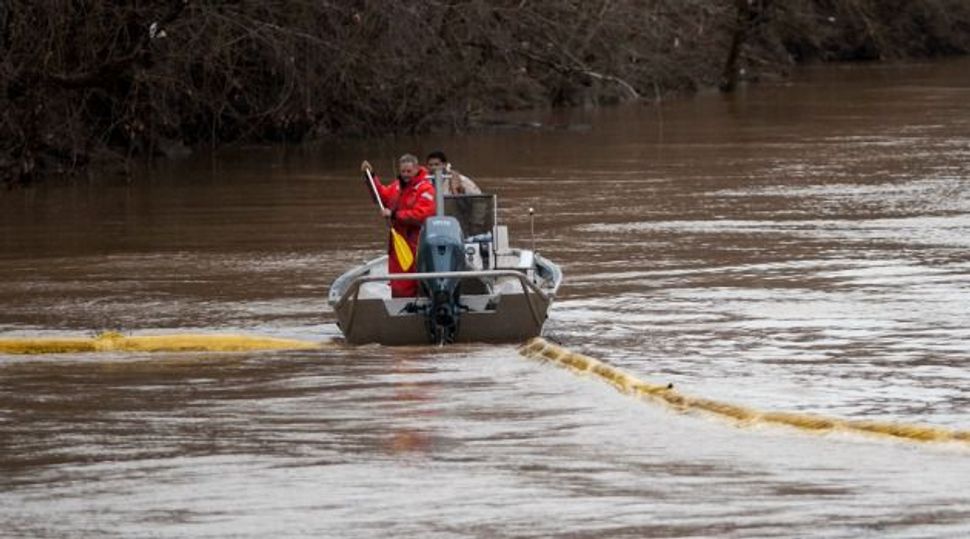 There are two Jewish congregations in Charleston, W.Va., a city of 50,000 that 1,100 Jews call home. Both B’nai Jacob and Temple Israel are located in downtown Charleston on the Kanawha River, not far from its junction with the Elk River. They stand barely a 10-minute drive away from the chemical plant that caused a toxic spill in January, contaminating the tap water for more than 300,000 people.

An accident of geography placed the Jewish community in the crosshairs of the chemical spill crisis.

But a history of activism, community and faith spurred Jews to respond with a quickness and force that belie the community’s small numbers. 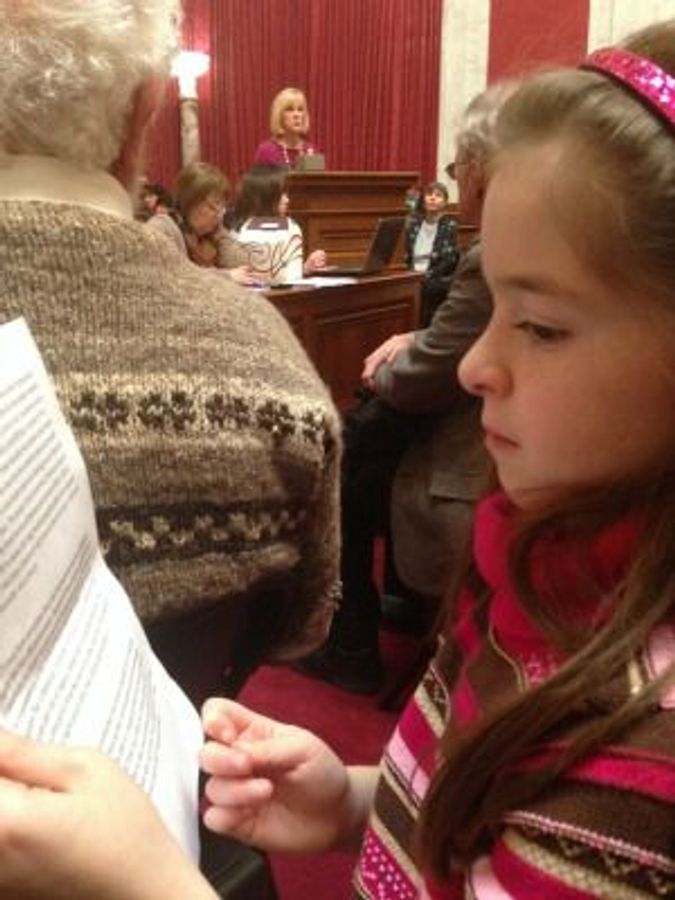 Ava Rose Katz, 7, reads testimony as her father prepares to testify at a West Virginia hearing into the Elk River chemical spill. Image by Lori Magana

“We scooped everyone,” said Rabbi Victor Urecki of Congregation B’nai Jacob, explaining that one of his congregants, who works for the local 911 telephone service, alerted synagogue members before the spill had even been announced publicly.

The spill spread quickly because Charleston’s primary water intake and treatment center is located immediately downstream from Freedom Industries’s chemical plant, where a storage tank sprung a leak on January 9.

Once the extent of the crisis became known, both Charleston synagogues raced to deliver bottled water to the elderly and housebound, many of whom were left without any usable water.

West Virginia Jews concede that they don’t see themselves as self-consciously Jewish activists in the same way that Jews in larger communities do. But they proudly insist they know how to build bridges and how to get things done to right a wrong.

“It’s not like New York,” Rabbi Jim Cohn of Temple Israel said, alluding to a lack of stand-alone Jewish social action organizations. “But we’re very active in the community as individuals, and we cooperate and collaborate constantly with people from all backgrounds.”

Although officials pronounced the city’s water safe to use on January 13, many say they still do not trust it — and are determined to make sure such a disaster doesn’t happen again.

“This is the incident that turned me into an activist,” said Richard Katz, a B’nai Jacob member who has joined environmental groups in spearheading a push for reforms since the spill. “It’s hard not to get involved when you feel powerless to provide your wife and daughter with clean water.”

David Miller and Casey Guet, two Unitarian Universalist ministers in training and environmental activists from the Charleston area, said the coal industry has poured money into fighting environmental legislation in the state. But it has also spawned powerful popular resistance.

“It’s easy to think that West Virginia consists of a bunch of hillbillies whose lives revolve around coal,” Guet said. But it’s not that simple.”

Quoting a ubiquitous coal industry slogan, she said, “It’s not true that ‘Coal keeps the lights on’ in West Virginia.”

Some of the earliest Jewish residents of West Virginia came as immigrant miners or labor union activists. Merchants followed to start stores that served as alternatives to “company stores” run by mining corporations. Other Jews came under the auspices of progressive organizations such as Appalachian Volunteers and various back-to-the-land movements — and never left.

In recent times, Jewish professionals have played roles on both sides of the state’s environmental battles. The rabbis at both Charleston synagogues pointedly avoided making any broad political statements about the community’s role in the state.

Nevertheless, when the Elk River crisis struck, the Jewish community came together and swung into action.

Freedom Industries originally reported a leak of 7,500 gallons of crude MCHM (4-methylcyclohexane methanol), a chemical used in processing coal. It later acknowledged that the spill involved 10,000 gallons, and mentioned the involvement of a second chemical, known as PPH.

B’nai Jacob member Michael Pushkin is a taxi driver who’s running for a seat in the West Virginia House of Delegates from downtown Charleston. He used his van to deliver water throughout the nine affected counties.

“If I win, I’ll be the only Jew currently in the state legislature,” Pushkin declared.

Temple Israel happened to have 800 bottles of water stored in a closet, left over from a recent conference.

“So we distributed them,” Cohn said. “We also supported local soup kitchens, which were struggling to maintain their services without access to potable water.”

In light of the relatively frequent industrial accidents in the region, the synagogue maintains a stock of emergency supplies, including inflatable beds. Fortunately, in this case the supplies weren’t needed, and on January 13 officials declared water safe to use.

Even after officials declared the tap water safe to drink, Charleston residents were plagued with doubt — and perhaps with good reason.

MCHM, the primary chemical involved in the spill, is one of thousands of chemicals that are merely “presumed safe” under the terms of the federal Toxic Substances Control Act, according to the Environmental Defense Fund. It has never undergone rigorous testing, which means that no one really knows what its long-term health effects might be. In fact, officials don’t seem to know how to remove it from the city’s water system. So far, flushing attempts have not gotten rid of the chemical’s characteristic licorice smell.

Activists say they want comprehensive federal reform of the Toxic Substances Control Act to ensure that communities are safe from similar chemicals in the future.

Pushkin takes his guitar on the campaign trail, singing “We’re All a Bunch of Water,” a song that he wrote for a candlelight vigil that was held at the West Virginia State Capitol on January 21.

“I’d like to see the chemical industry play by the same rules as everyone else,” Pushkin said.

When he testified about the spill before the West Virginia House of Delegates at a February 3 hearing, Katz urged that state lawmakers make other changes recommended by federal monitors.

“Every time [federal officials] come, they make the same recommendations. Then they leave, and nothing changes,” Katz said. “But maybe this time could be different.” Citing the Jewish value of pikuach nefesh, or the obligation to save a life, Katz particularly emphasized the need for long-term medical monitoring in the region.

His passion was evident as he described the local activist scene, naming People Concerned About Chemical Safety, Our Water WV, Citizens Actively Protecting the Environment, Friends of Water, the West Virginia Rivers Coalition and the Clean Water Defense League as key players.

Katz and others also emphasized the role of local media, as well as Facebook and Twitter, in spreading information about the incident.

Both Pushkin and Urecki mentioned erosion of trust as a major result of the spill — and predicted that it would have wide-reaching effects on the city’s future.

“This is a huge hit for Charleston’s reputation,” Pushkin said. “Industry representatives claim that regulation hurts the economy. But when something like this happens, it hurts the economy much more,”

Katz agreed, noting that the spill would accelerate a brain drain away from West Virginia.

He said that if “our leaders keep selling our state to the highest bidder, people will leave. You reap what you sow — and now we may.”

Ri J. Turner can be reached at feedback@forward.com