Is There an Echo in Here? 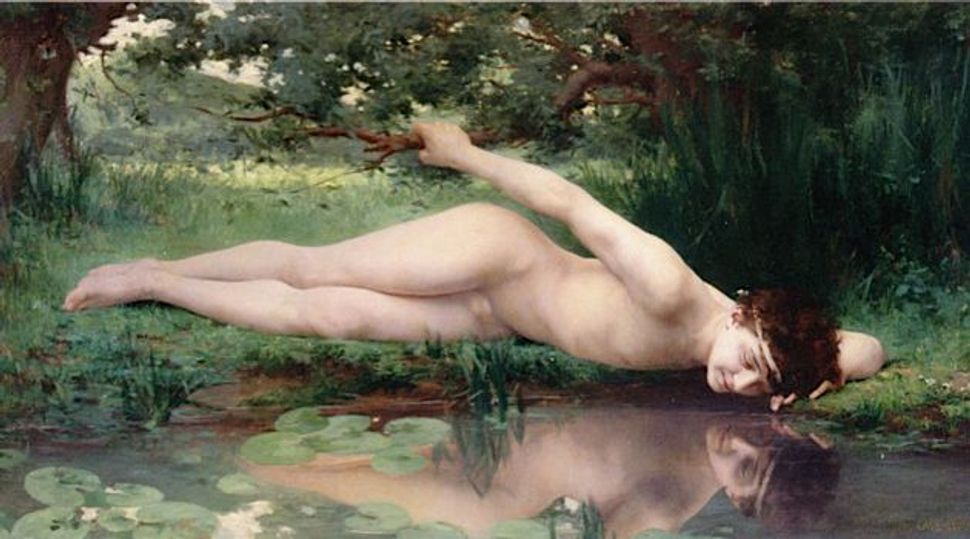 Fairest of Them All: When Narcissus spurns Echo, he tells her, ?May I die before I give you power over me.? Image by Wikimedia Commons

Jeffrey Lubin writes to ask what a bat-kol is and why it isn’t a ben-kol. Since this question won’t mean much to most of you, I’d better explain.

The roughly 2,000-year-old Hebrew word bat-kol is not found in the Bible, and first appears in early rabbinic literature. Translatable literally as “the daughter of a voice,” it can mean one of two things.

One is an echo; the other is a mysterious voice that conveys a divine or oracular message. In Hebrew, the words bat, “daughter,” and ben, “son,” are sometimes used in the sense of “belonging to,” as in expressions like ben-ir and bat-ir, literally “son of a town” and “daughter of a town”— that is, a townsman or townswoman; or ben-zug and bat-zug, “son of a couple” and “daughter of a couple” — that is, a partner in a relationship.

As a rule, unless one wishes to specify that the town dweller, partner, etc., is feminine, one uses the masculine form, which is the default option in Hebrew. And yet in the case of bat-kol there is no masculine form, and one never says ben-kol, “the son of a voice.” Mr. Lubin inquires why this is.

I don’t know, but not knowing, as readers of this column are aware, has rarely kept me from guessing. I’ll start with the assumption, which is logical but not provable, that the earlier of bat-kol’s two meanings is “echo.”

This, for example, is how the word is used in a midrash, dating to the early centuries of the Common Era, that tells us, stressing the singular nature of the revelation at Mount Sinai, “When a man calls to another man, his voice has a bat-kol, but when God spoke [at the mountain], his voice had no bat-kol at all.” To this I’ll add the assumption, which is provable, that many of the rabbis of this period had some knowledge of Greek and Roman mythology, if only because it was part of the cultural milieu of the Graeco-Roman world they inhabited. And if they did, they may have known or heard of the story of Echo, the talkative woodland nymph who — as related by the Latin poet Ovid — chattered away to the goddess Juno to distract her while other nymphs were dallying with Juno’s husband, Jove.

When Juno discovered Echo’s ruse, Ovid recounts, she punished her by limiting her power of speech to a word or two that repeat the words said to her. And so when Narcissus, who spurns Echo when she falls in love with him, says to her, “May I die before I give you power over me,” she answers, “I give you power over me,” and proceeds to pine away until nothing is left of her.

Invisible, “she is seen no more upon the mountain-sides, but all may hear her, for her voice, and her voice alone, still lives in her.” Whenever we hear an echo, it is Echo we hear.

Can this myth be the source of the rabbinic bat-kol? It certainly is possible; other Greek myths show up in rabbinic literature in concealed form, too. And because an echo has no clear source and seems to come now from nowhere in particular, bat-kol took on its second meaning of “a voice from the blue” — that is, a heavenly pronouncement. A bat-kol, for the early rabbis, was not the same as the voice of God that was heard by the biblical Prophets and did not have the weight of prophetic authority. Its status, indeed, was ambiguous, since the hearer of it could never be sure just where it emanated from or whose will it reflected. Heaven, in rabbinic thought, was also populated by angels sometimes acting on their own, and a bat-kol could come from them, too.

This is nicely conveyed in the well-known story in the Talmud about Rabbi Eliezer ben Hyrcanus, who, finding himself in disagreement with some other rabbis over a law, performed a series of miracles to persuade the rabbis he was right and, when they remained unconvinced, appealed to heaven for corroboration. At once, the story continues, “a bat-kol was heard saying, ‘Why are you arguing with Rabbi Eliezer, whose opinion the law always follows?’” The rabbis, however, still refused to give in: A bat-kol, they replied, was only a bat-kol, whereas laws must be determined by a majority, not by a single individual, no matter how great his powers. Sometime later, we are told, one of them met the heaven-dwelling Elijah and asked him what had happened on high at that moment. God, Elijah answered, had chuckled and said, “My sons have gotten the better of me.”

Whether or not it came from him, in other words, the bat-kol upholding Rabbi Eliezer was a voice God agreed with but was pleased to see disobeyed by the rabbis entrusted with interpreting his Torah, whose autonomy he respected. The moral is that hearing a bat-kol may be a powerfully mystical experience but not always one to be trusted. That’s something to keep in mind when having such experiences ourselves.

Is There an Echo in Here?