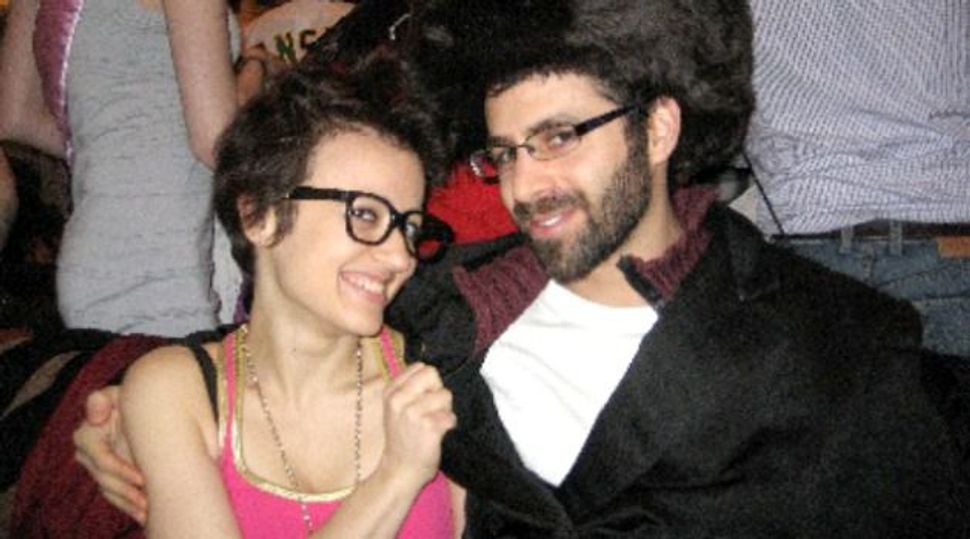 That?s So Not Funny: Some members of a Brooklyn Jewish congregation complained when William Levin, shown here with his wife, Malya, wrote ?Everyone Is Pregnant? in a newsletter. Image by Courtesy of Levin Family

There is perhaps no place so emblematic of today’s yuppie sensibilities as this gentrified Brooklyn neighborhood. An affluent area full of young families, yoga studios, coffee shops and famous writers, Park Slope — until recently, the home community of New York Mayor Bill de Blasio — is a symbol of liberal sincerity and, sometimes, over-the-top political correctness.

From the local food coop’s fight over the boycott of Israeli goods to disgruntlement over a bar that welcomed babies, the neighborhood’s provincial controversies have often fascinated the New York and national press. In 2006, journalists even rushed to cover the case of a woman who wrote to a neighborhood listserv to report, “Found: boy’s hat” — and was roundly castigated for assuming the cap’s owner was male.

Now, Park Slope is having its Jewish moment.

The hubbub started one Saturday morning when William and Malya Levin attended Shabbat services at Altshul, a Park Slope indie minyan they have belonged to for three years.

Founded in 2005 by 20 people in a local bar, Altshul has since grown into a large minyan that meets three weekends a month in Congregation Beth Elohim, a Reform synagogue. As the congregation has aged, children have become a major part of Altshul life — and, in some cases, a source of tension, as the community contemplates how to welcome families while simultaneously maintaining peaceful services.

On this particular Shabbat morning, recalled William Levin, “We noticed that there were no less than six couples with little circles around them, and they were talking about having a kid. Everyone was wishing ‘b’sha’a tovah’” — a Hebrew phrase of congratulations on hearing of a pregnancy.

“And remarking on how there was going to be a baby boom in six months,” added Malya Levin.

William Levin, a 42-year-old writer and cartoon animator who pens the Altshul newsletter, thought he was just stating the obvious — and making a harmless joke — when he later wrote a headline in the February 12 bulletin that said: “EVERYONE IS PREGNANT! Come to services to find out who is expecting.”

But for many, it was no joke. Concerned Altshulers swarmed the Internet to voice their discomfort with the message, which they claimed would alienate singles and couples who were having trouble conceiving.

On one Facebook post about the newsletter, comments ranged from the indignant (“Wow. I think the next email should say, ‘EVERYONE IS WHITE!’”) to the saddened (“…my heart cracked at the thought of a couple struggling with fertility issues reading that… Nope, not funny.”). There was a call to action: Someone should “send the coordination team a nice email” stating the concerns, one writer recommended. Another commenter took up the torch: “On it.”

The Facebook conversation then took a turn toward the arcane as some speculated that the newsletter item could be a reference to Purim Katan, or “minor Purim,” a little-known holiday that occurs when the Jewish year is “pregnant” with two months of Adar instead of one — in order to reset the calendar in a way similar to Western leap years. This year, Purim Katan began on the evening of February 13, just after the newsletter went out.

But one commenter felt doubly alienated by this idea: “while the intention of the pregnant statement is now clearer, I wish it wasn’t tied to the holiday. that’s just adding another layer of inaccessibility by assuming everyone would get it…. a private club joke.” Another commenter responded with a question about how synagogues might balance being insidery and being inclusive. But this also stepped on sensitivities. “…I feel uncomfortable with the way you are framing the discussion,” wrote the first. “Let’s discuss off Facebook.”

William Levin, who said that the message was not a reference to the holiday, added that Altshul leadership received several notes complaining about the newsletter, which goes out to 920 people. Many of the messages came to his inbox, because he manages the info@altshul.com account. “People didn’t realize that they were complaining to the very person that wrote the funny memo,” he said.

Altshul’s leaders debated whether to respond. (Altshul co-founder Amanda Pogany declined to comment on the situation.) Malya Levin, who is a member of the leadership team, said that she urged against a response. “By sending out an apology, you were giving the issue more gravitas than it deserved.”

But the majority was for responding. On February 13, the day after the newsletter went out, the leadership team sent out another email. “This week, a line about ‘everyone being pregnant’ lacked the sensitivity and inclusiveness that we strive for at Altshul,” it read. “In the future, we will try to be more sensitive and ensure that our communications are more in keeping with our values.”

William Levin reported that members of the leadership team also asked him to be more “bland” in his future bulletins. The team is now reviewing its newsletter policy.

“The irony of it all is that Malya and I perhaps fall into that category of not having children but wanting and trying, and we found it to be funny,” he said. “We weren’t offended at all.”

Naomi Zeveloff is the deputy culture editor of the Forward. Reach her at Zeveloff@forward.com and on Twitter @naomizeveloff