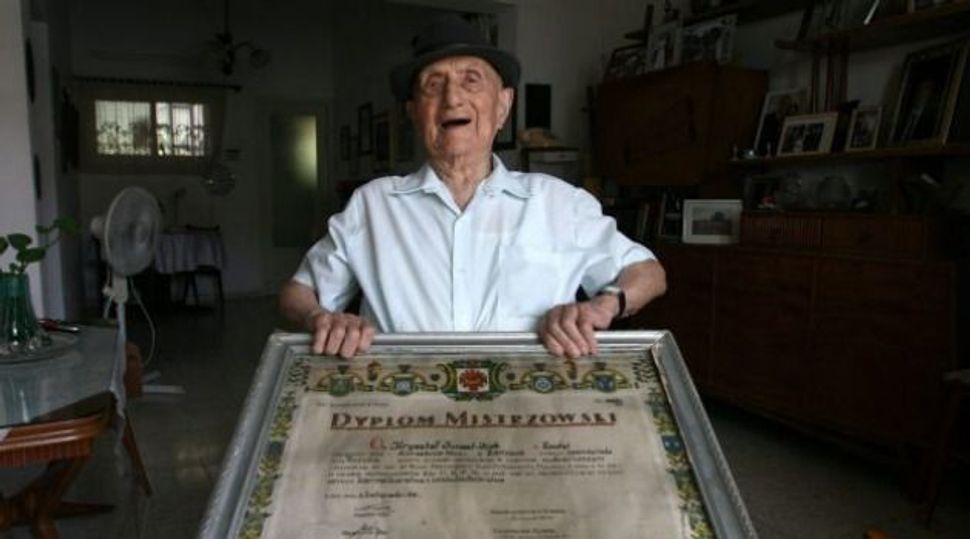 (Haaretz) — Alice Herz-Sommer, the Jewish pianist from London and survivor of Theresienstadt, died Sunday at the age of 110. After the passing of Sommer, whom the media described as the world’s oldest Holocaust survivor, the unofficial title passes to Yisrael Kristal, an Israeli confectioner from Haifa, who celebrated his 110th birthday last September.

Yisrael Kristal’s story may be as extraordinary as that of Sommer, but their world views are different. The birthday cards Kristal received for his hundredth birthday – ten years ago – decorate the walls of his Haifa home. “We’re not counting his great-grandchildren, but there are more than twenty,” said Oren, one of Kristal’s nine grandchildren.

This year marks the hundredth anniversary of the outbreak of World War I. Kristal, who was born in 1903, remembers it from childhood. He saw Emperor Franz Josef I of Austria, the symbol of 19th-century Europe, with his own eyes. “I saw him in 1914, when I was a boy. There was a war then. He passed through our town in his car and we threw candy,” Kristal told Haaretz in an interview at his home last year.

Kristal’s mother died before World War I broke out. His father was captured by the Russian army and died soon after. In 1920, the 17-year-old orphan moved to Lodz, Poland to start over. After a stint as a metalworker, he began working in the family business: a candy factory in a nearby town. “It was hard physical labor. I dragged sacks of sugar that weighed 25 kilograms [55 pounds],” he recalls. It was in the factory that he learned the profession that stayed with him for the rest of his life – and that, one could say, saved him.

The Lodz Ghetto was established in 1940. Kristal, who was already a renowned expert in candy-making, continued his work, at times in secret and at times with semi-official encouragement from those in charge of the ghetto with Chaim Rumkowski, the head of the Judenrat, first among them.

“Two books could be written about a single day there,” he said. After liberation, he was taken to a hospital under the protection of the Russian army. There he was allowed to return to his profession, and he prepared sweets for Russian soldiers.

When he recovered, he returned to Lodz, where he met his second wife, Batsheva. He rebuilt the factory, which had been destroyed, and returned to producing candies. In 1950, Kristal, Batsheva and their young son, Chaim, immigrated to Israel on the vessel Komemiyut, and settled in Haifa. At first, Kristal worked in the Palata candy factory in the Haifa Bay area. The owners, who spoke Polish, were glad to employ an expert from their home country. Kristal taught them how to make an entire production line of sweets.

Later on, Kristal became self-employed and produced boutique sweets at home, including tiny chocolate bottles of liqueur wrapped in colored foil, jam made from carob and chocolate-covered orange peels, which he sold at a kiosk in Haifa. Between 1952 and 1970, he produced his candies at the Sar and Kristal factory on Shivat Zion Street. After the factory closed, he went back to producing candies at home.

“It’s not such a good bargain,” he said in Yiddish when he was asked how he has been able to reach his ripe old age. “Everybody has their own fortune. It’s up to God. I didn’t know before, either. There are no secrets.” When asked what he ate to stay healthy, he said, “There wasn’t always food in the camps. I ate what I was given. I eat to live, and I don’t live to eat. You don’t need too much. Anything that’s too much isn’t good. It isn’t good to be too beautiful or too smart. It isn’t good to eat too much, either. A little less is better than a little more. It’s not good to have a full stomach.”

Unlike Alice Herz-Sommer, who expressed an optimistic world view to her last breath, Kristal is more realistic. “The world is worse than in the past,” he said. “I don’t like the permissiveness here. Everything’s allowed. At one time, young people weren’t as cheeky as they are now. They had to think about a profession and about making a living. They were carpenters, tailors. That doesn’t exist today. Now it’s all high-tech. Things come easily, without effort, without the manual labor of the past. When were children, our parents told us, “You’ll marry this one, not that one. Today, children decide everything. Once upon a time, parents had the last word.”