Three Jews Among Those Killed in Ukraine Uprising 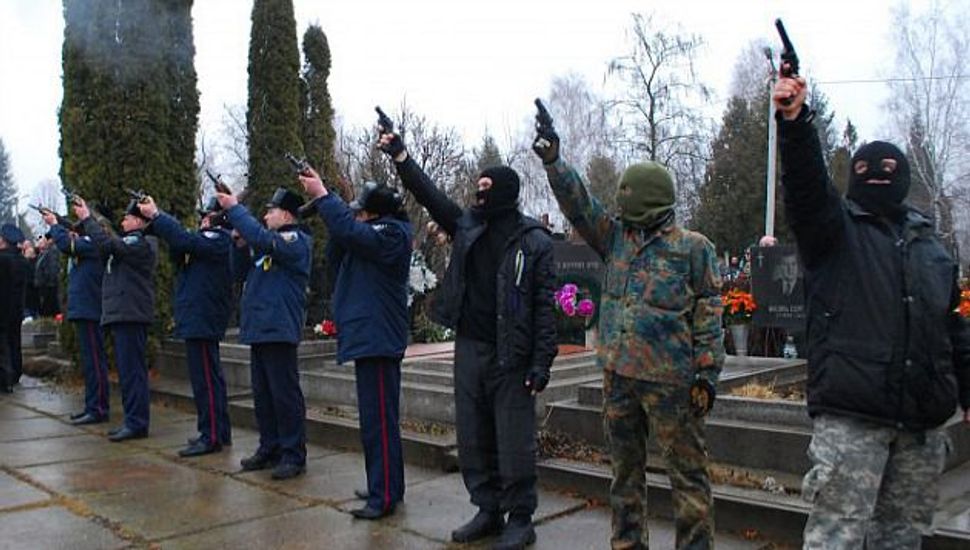 Far right wing gunmen and Ukrainian policemen at the funeral of Alexander Scherbanyuk. Image by courtesy of Vyacheslav A. Likhachev

Balaclava-clad far-right paramilitaries fire into the air at the funeral in Ukraine of an anti-government protestor. This is not a tribute to a fellow right-wing nationalist, but to a Jewish construction worker, Alexander Scherbanyuk.

Of the approximately 100 people killed during the protests in Kiev that swept Ukrainian President Viktor Yanukovich from power in February, three were Jews, according to Vyacheslav Likhachev, a Ukrainian anti-Semitism expert.

Scherbanyuk, 46, a construction worker and political activist from Chernivtsi, was killed by sniper fire on February 20.

The same day, snipers in Kiev killed two more Jewish anti-government protesters, Josef Shiling, a 61-year-old construction worker from Drogobych and Evgeniy Kotlyar, a 33-year old ecological activist from Kharkiv. Each of the three men, whom the Ukrainians consider as martyrs to their revolution, were known by their local Jewish communities, Likachev said.

Scherbanyuk “was buried with a gas mask, a hardhat, and a kippah,” Likhachev wrote on the website of the Euro-Asian Jewish Congress.

The inclusion of a far right group, Right Sector, at Scherbanyuk’s funeral in Chernivtsi on February 23, underlines the diversity of the Ukrainian revolution.

It also shows how Jews and right-wing nationalists get along in today’s Ukraine.

Right Sector is an umbrella organization that represents many groups, including the Neo Nazi Social-National Assembly, Likhachev said. But other paramilitary groups that included Jews also fought under the Right Sector umbrella, he said.

David Fishman, an expert on the former Soviet Union at the Jewish Theological Seminary in New York, said that the experience of fighting alongside Jews may have had an effect on the Right Sector’s language towards Jews.

Right Sector’s leader, Dmitry Yarosh, recently met with the Israel’s ambassador to Ukraine to allay concerns and to pledge to fight racism and anti-Semitism in Ukraine.

Nationalists and paramilitary groups, like Right Sector, played a small but significant role in the revolution. So, too, did ethnic Russians, Jews and other minorities who now hold key positions in Ukraine’s new interim national and local authorities.

The Ukrainian nationalist group Svoboda won four posts in Ukraine’s interim government. Russia has tarred Ukraine’s new rulers as “fascist.” It has warned of the increased dangers of racist and xenophobic attacks, including anti-Semitic assaults.

But some Ukrainian-Jewish leaders strongly oppose such allegations.

In an open letter to Russian President Vladimir Putin, published March 4, a group of Ukrainian Jews said: “Your certainty about the growth of anti-Semitism in Ukraine, which you expressed at your press-conference, also does not correspond to the actual facts.”

Writing in the Huffington Post on March 14, Foxman said: “Russia’s claims about anti-Semitism in Ukraine’s revolution are simply not true. They are an effort to delegitimize the actions of the Ukrainian people and to win sympathy for Russia’s defiance of international law.”

But there has been a rash of unsolved anti-Semitic assaults and acts of vandalism in Ukraine since the beginning of this year. One man was beaten and another was stabbed in two assaults in Kiev in January.

Moreover, the incidents have not stopped since the new interim government took power.

On Friday, March 14, a man and his wife on their way to synagogue in Kiev were surrounded by youths shouting anti-Semitic slurs. They escaped in a taxi.

One day earlier, Rabbi Hillel Cohen was attacked on the street in Kiev. Cohen, who appeared on stage during the EuroMaidan protests in December, was struck in the leg and called a “kike.”

Ukrainian law enforcement authorities have failed to identify or apprehend any perpetrators of the recent acts.

But Valentyn Nalyvaichenko, the head of Ukraine’s state security service, recently told Jewish leaders that he intends to reopen a special department to combat discrimination, xenophobia and anti-Semitism. The department, created in 2007, was closed down under the Yanukovich administration.

Jewish defenders of the new interim government have blamed past assaults on pro-Russian provocateurs.

Likhachev, who monitors anti-Semitism for the Euro-Asian Jewish Congress, said he believes most of the assaults were organized not by ultra-nationalist activists but by “professional provocateurs.”

While Jews in Ukraine wonder what will happen next in their country, Jews in Crimea awoke on March 17 to find themselves no longer a part of Ukraine.

Ninety-seven percent of voters in Crimea opted to join the Russian Federation in a March 16 referendum that was heavily criticized by Europe and America.

A spokesman for the American Jewish Joint Distribution Committee said that Jews in Crimea, thought to number about 10,000, are “understandably apprehensive.”

The Joint serves 4,000 elderly and nearly 1,000 at risk children and their families in Crimea.

Banks in Crimea have instituted a limit on cash withdrawals from checking accounts of $30 per day. Credit has been frozen.

Although food and medicine is still available, the Joint spokesman said that price of some items has risen by 30% to 50%.

“Many retailers also say that because the roads to the Crimea are blocked [by Russian troops] and many suppliers cannot come through and bring new supplies, they are expecting possible food shortages,“ the spokesman added.

Three Jews Among Those Killed in Ukraine Uprising