Many Crimea Jews Said To Back New Union With Russia 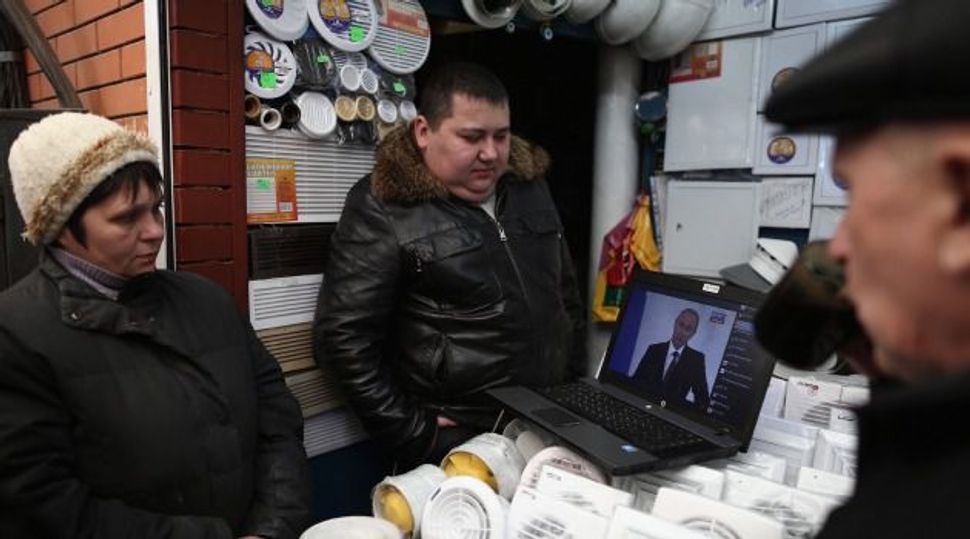 Popular Contest: Crimeans watch as Russia President Vladimir Putin declares recognition of the province as an independent entity after it voted to leave Ukraine. Image by getty images

Crimea’s most prominent rabbi has fled to Kiev. But the Jewish community that remains is largely happy living in a fledgling Crimean republic under the control of the Russian Federation.

Rabbi Misha Kapustin, who oversaw the region’s liberal Jewish congregations, moved to the Ukrainian capital ahead of Crimea’s March 16 referendum. Meanwhile, religious emissaries from the Chabad-Lubavitch Hasidic organization, who were based in Simferopol and Sevastopol, left Ukraine.

Alexander Dukhovny, chief rabbi of Ukraine’s Progressive Jewish community, said that the lay leaders who remained in Crimea were content with the current political situation. “I spoke with leaders of our congregations [in Crimea], and very many of them were very happy that Russia is coming,” Dukhovny said in a phone interview from Kiev.

Reform and Progressive Judaism is particularly strong in Crimea — in stark contrast to other parts of Ukraine, where Chabad is ascendant. Crimea has five Reform or Progressive congregations, with synagogues in Yevpatoria, Kerch and in the Crimean capital, Simferopol.

Dukhovny, from his base in Ukraine’s capital, has been an outspoken critic of Russian President Vladimir Putin and a supporter of Ukraine’s revolution. “It was a revolution of dignity, because we wanted democracy, justice and kindness installed in Ukraine,” he said.

Kapustin, whose Ner Tamid synagogue, in Simferopol, was vandalized in late February with anti-Semitic graffiti, also supported the Ukrainian revolution.

“Our town, Simferopol, is occupied by the Russians,” Kapustin wrote in an email to the Diaspora in early March. “Help us, save our country, save Ukraine! Ask your government for help!”

Many Crimean Jews were “unhappy” with Kapustin’s views, Dukhovny said.

Reached in Kiev on March 18, Kapustin said, “I don’t give any interviews anymore.”

Anatoly Gendin, head of the Association of Jewish Organizations and Communities of Crimea said that Kapustin was a good rabbi. “Maybe he made a mistake,” Gendin said, speaking in Russian from his home in Simferopol. “He did good work here.”

Gendin said that if Kapustin were to return to Crimea, the community would welcome him back, although Kapustin’s past anti-Russian statements might make a return difficult.

If Kapustin does not return, Gendin said, the community might look to Israel or the Russian Federation to provide a replacement rabbi.

Gendin, 69, said that many Crimean Jews, like their neighbors, were disillusioned with successive Ukrainian governments that had failed to combat poverty and corruption.

He said that they welcomed becoming a part of the Russian Federation. Although, he added, they would have to wait and see whether living conditions will improve.

Dukhovny said that Crimean Jews were tempted by the promise of a Russian standard of living and a Russian pension, both of which would be an improvement on current Ukrainian living conditions. But, Dukhovny said, they have stepped into a “golden cage.”

“History teaches very often that this promised golden cage becomes a cage made out of iron,” Dukhovny added. “So they must be careful.”

Many Crimea Jews Said To Back New Union With Russia