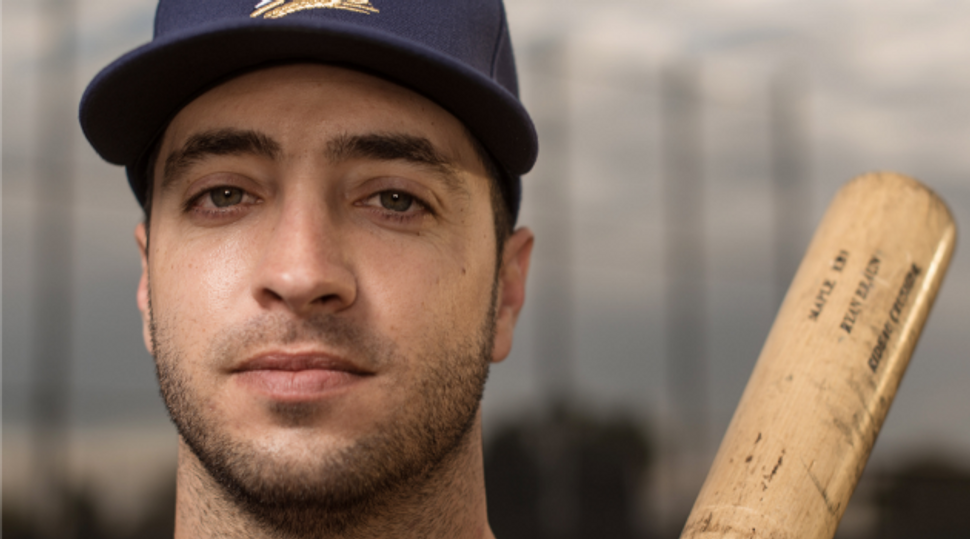 (JTA) — In the biblical tradition of lingering in the desert en route to the Promised Land, Major League Baseball teams are packing up and embarking on their exodus from Arizona (and Florida) spring training sites to begin the new season.

Rosters won’t be finalized until this weekend, but 10 Jewish players are likely to make the journey, led by Moses and Aaron — er, Ian Kinsler and Ryan Braun. A Jewish perennial, Kevin Youkilis, late of the New York Yankees, signed with Japan’s Tohoku Rakuten Golden Eagles for this season.

Filling out the Jewish roster are mostly middle-of-the-road role players without any up-and-comers at the major league level. The World Series champion Boston Red Sox and the expected also-ran New York Mets each feature two Jewish players, and the Detroit Tigers have one player (and maybe a second later in the season) along with new manager Brad Ausmus, who guided the Israeli team’s World Baseball Classic entry in 2012.

“At the risk of seeming too sunny, it’s a terrific group,” Howard Megdal, author of “The Baseball Talmud” and a writer for MLB.com’s “Sports on Earth,” told JTA, though the subsequent demotion of three players who had played in the majors in 2013 darkened his rosy outlook.

While no one besides Kinsler and Braun, who returns to the field after sitting out the last 65 games of last season for violating MLB’s drug program, projects as an all-star, the group is impressive academically, at least.

Then there’s Ausmus, a Dartmouth graduate who is making his managerial debut with one of several teams he played for during a distinguished catching career.

The reinforcements are promising. After bringing Joc Pederson to Australia, where they swept the Arizona Diamondbacks last weekend in two season-opening games, the Los Angeles Dodgers sent the outfielder to AAA Albuquerque (the desert again); he is considered a future star. Left-handed pitcher Max Fried, the seventh overall draft pick two years ago, is moving up the San Diego Padres system, while another southpaw, Rob Kaminsky, was the St. Louis Cardinals’ first-round selection last year.

If the trio can summit baseball’s Mount Sinai, they would join the current Chosen Ones there:

The offseason saw a blockbuster trade sending Kinsler to Motown from the Texas Rangers for slugging first baseman Prince Fielder. Over the past six seasons, Kinsler has averaged 150 hits, 20 home runs and 23 stolen bases. He has played in three All-Star Games and is a proven clutch player, helping the Rangers to their only World Series appearances (in 2010 and 2011) and batting .311 in the postseason.

Returning from suspension, few in baseball are in greater need of a high on-field profile and a low one off it. The “Hebrew Hammer” can expect to face the ire of fans away from Milwaukee for passing the buck regarding his use of steroids. He isn’t likely to address the matter, so Braun’s bat will have to do the talking. Steroids enabled or not, Braun did win Rookie of the Year (2007) and Most Valuable Player (2011) honors, and is a five-time All-Star.

Feldman signed a $30 million, three-year contract with the Astros last winter, bringing him back to the Lone Star State. That’s where the righty spent his first eight big league seasons as a member of the Rangers, producing a career-best 17-8 record in 2009. Feldman went 12-12 last year for the Chicago Cubs and Baltimore Orioles.

Valencia, playing last season for the Orioles, provided an able bat — nearly half his hits went for extra bases on the way to a .304 batting average – especially during the team’s ultimately unsuccessful playoff drive. After returning from the minor leagues, Valencia contributed primarily as a DH against left-handed pitchers. Playing for the Minnesota Twins in 2011, he cranked out 15 homers and knocked in 72 runs, by far his career highs.

The veteran southpaw appeared in three World Series games for the Sox, who dispatched the St. Louis Cardinals in six, but didn’t fare especially well after throwing a total of seven scoreless innings in as many appearances in the two previous playoff series. Breslow, a lefty specialist, appeared in 61 games last season and finished with a strong 1.81 ERA. Ryan Lavarnway, Boston Red Sox, catcher, fourth season. Lavarnway was left off the postseason roster despite batting .299 in limited action during a regular season marked by several shuttles to AAA Pawtucket. Not that 2013 wasn’t noteworthy for Lavarnway, since in the first inning of an Aug. 6 game in Houston he was charged with four passed balls, tying a dubious major league record. That was hardly indicative of his backstopping ability, since the hurler was a knuckleballer, but the Red Sox nevertheless are trying out Lavarnway at first base this spring.

While always a smooth fielder, Davis is a half-full/half-empty kind of hitter, challenging for the Rookie of the Year in 2010 and hitting .302 in an injury-shortened sophomore season, only to fall to .227 his third year despite bopping 32 homers. Last season, he even was exiled for a while to AAA Las Vegas (yes, desert) to straighten out his swing, but that merely meant finishing at .205. Notwithstanding off-season trade rumors, Davis is back with the Mets and is in a three-way battle for the starter’s job.

In his first lengthy taste of the majors, Satin in 2013 appeared in 75 games (after just 16 games played his first two seasons) and batted .279 with 15 doubles while playing mostly first and third base. Satin, Davis and another candidate, Lucas Duda, have failed to seize the spot, but as the lone right-handed batter, Satin could at least play against lefties.

Fuld was a valuable backup outfielder while playing the past three seasons for the Tampa Bay Rays. Allowed to leave as a free agent, the lefty swinger was acquired by the A’s innovative general manager Billy Beane of “Moneyball” fame.

Marquis will be pitching for his eighth club, including five in the last six seasons. The righty showed promise early in his career, averaging 13 wins over a six-season span, but injuries and age have taken a toll. Still, the nine wins in 2013 were his most since 2009, and his 4.05 earned run average was among his better efforts.

Ausmus finished his playing career with the Dodgers, moved on to the front office of the Padres, leading to his managing Israel’s WBC squad and on to the job in Detroit. One of his WBC charges, Ben Guez, is hoping to join Ausmus in “The Show.” In a few weeks, perhaps a promotion could be his afikomen present.