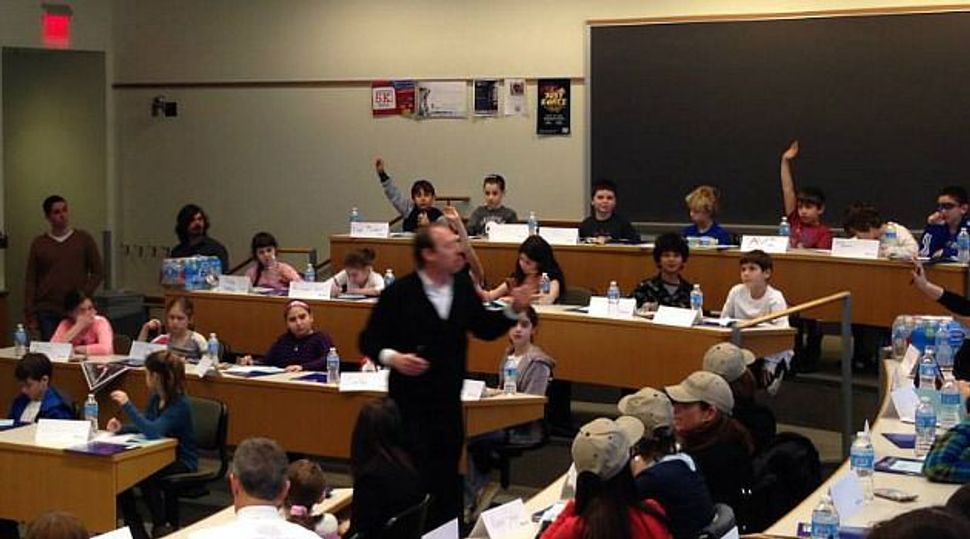 A labor union battle raging at a Philadelphia Jewish day school has highlighted the scarcity of collective bargaining in the Jewish education system and the use of religious exemptions to ban union contracts.

Perelman Jewish Day School, with 300 kindergarten to fifth-grade students on two Philadelphia-area campuses, announced on March 24 its decision to unilaterally discontinue union contracts with its 55 teachers. The teachers were offered a nonunion contract for the next year. Parents were told the school board believes that “administrators at nonunion independent schools are better able to directly and sensitively manage their faculty.”

The move was met with a harsh rejection from the American Federation of Teachers, the teachers union, which has vowed to fight the decision. But it also puts Perelman in line with most other Jewish schools across the country that are out of bounds for union organizers. As private schools, Jewish educational institutions are not compelled to allow organized labor and most have chosen not to do so. As religious institutions, they are free of many federal labor requirements.

It is a debate that has pitted Jewish labor organizers, who argued that actions such as that taken by Perelman violate “years of Jewish law and tradition,” against Jewish parents, who believe that greater power for school administrators would help promote the Jewish value of learning.

The union contracts have been in place for 38 years. The Perelman school board made its decision without consulting the teachers or their union. Aaron Freiwald, a member of the school board, told the Forward that the board had “preliminary exchanges” with the union last fall, but the union made clear that it “would not negotiate if tenure and seniority were on the table.” As a result, the school decided not to renew the union contract, which expires in the summer.

In an emergency meeting held on school grounds March 27, teachers and union representatives strongly rejected the board’s move, vowing to fight it in order to restore collective bargaining rights. “The actions of this board of directors are immoral,” said Ted Kirsch, president of AFT Pennsylvania, in a statement that also accused the school board of plotting behind their faculty’s back. “The board’s entire rollout this week was designed to pressure, manipulate and intimidate faculty into signing agreements that aren’t in their best interests or in the best interests? of the school or students.”

The dispute has touched on not only the fairness of dropping union representation, but also on the move’s legality, its practical ramifications and its compliance with Jewish values.

On the practical level, school leaders have tried to convince teachers and parents that the move will not include layoffs and that teachers would be offered a contract with an “enhanced salary and benefits package.” They also promised that the current salary and benefits structure will be incorporated into the new faculty handbook.

Both sides maintain that the law is on their side. The union announced that it will “pursue every legal avenue” to reverse the decision, though it did not specify the steps being discussed. According to the union, the school’s move violates federal labor laws. Perelman , on the other hand, turned to the school’s definition as a religious institution to defend its actions. “The United States Supreme Court has held that federal labor laws do not apply to religiously oriented schools,” Perelman wrote in a document sent to parents, explaining that this exemption gives the school “legal authority” to adopt a nonunion model.

Both sides clung to Jewish Scripture as supportive of their position. The school told parents that its decision to break with the union was motivated by Jewish values. Quoting the Talmud teaching that the “world exists only by virtue of the breath which comes from the mouths of school children,” the school argued that its decision “wholly supports this child-centered focus.”

But on May 2008, the Conservative movement’s Committee on Jewish Law and Standards adopted guidelines specifically calling on Jewish organizations, including schools, to prefer union representation. “In most cases, unions offer the most effective means of collective bargaining and of ensuring that workers are treated with dignity and paid sufficiently,” the document states. “Jewish employers should allow their employees to make their own independent decisions about whether to unionize.”

In most Jewish day schools, however, card carrying union members are not a common sight.

The day schools in Philadelphia have been an exception. Many Perelman students go on to attend middle and high school at the Jack M. Barrack Hebrew Academy, which is also unionized. Its teachers struck in November 2009, protesting attempts to cut pension benefits and freeze salaries. The strike lasted two weeks and ended with a compromise agreement.

In other schools, however, unions have been booted by management, based primarily on the religious exemption. Such was the case in Detroit in 2005 and, in 2012, in Rockland County, N.Y., when a Jewish school shut down, only to reopen immediately under a new name and without labor union organization.

As for Perelman, union activists would not reveal their further plans to fight the decision, but the previous experiences of other Jewish schools suggest they’ll be facing an uphill battle.