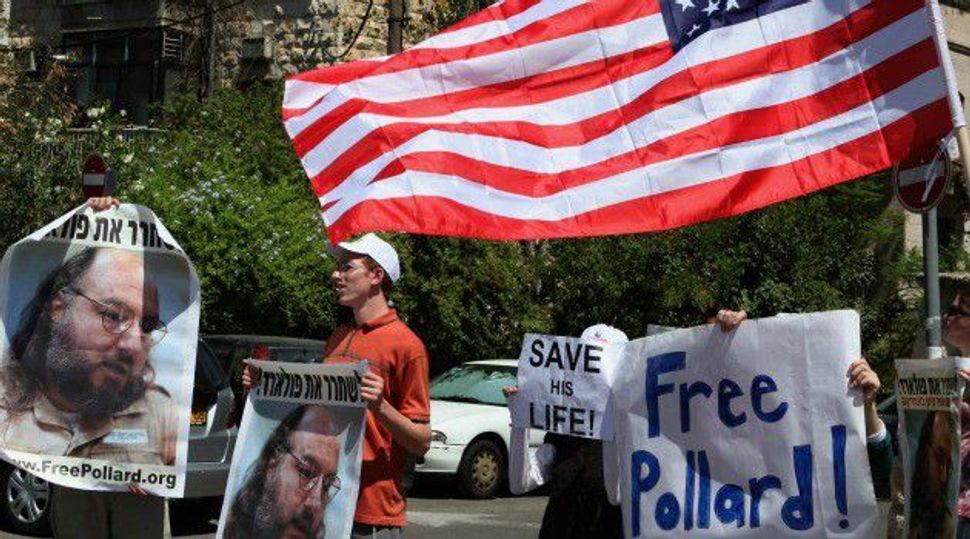 A U.S. proposal to consider freeing a jailed Israeli spy caught many American intelligence officials off-guard and will face stiff opposition if the Obama administration decides to go ahead with it in a bid to salvage Middle East peace talks, officials said.

Senior lawmakers, including Senator Dianne Feinstein, head of the Senate Intelligence Committee, staked out positions on Tuesday equally hostile to the idea, which started taking shape this week in talks between U.S. Secretary of State John Kerry and Israeli Prime Minister Benjamin Netanyahu.

“He shouldn’t be released. He should serve out,” Republican Senator Mark Kirk, a former Navy intelligence reservist, said when asked about Pollard’s fate. “I would hope that he would sort of rot in hell in jail for a long time.”

While the intelligence community has deterred successive administrations from giving in to Israeli appeals for Pollard’s freedom, the latest push appears to be gaining momentum.

Some intelligence veterans privately acknowledge that with Pollard having served nearly three decades and being eligible for parole in November 2015, this time it may be harder to convince the Obama administration to drop the idea.

But a half dozen current and former intelligence officials told Reuters they strongly oppose Pollard’s early release, arguing such a move would be a betrayal of the intelligence community, especially when many feel that the United States is not getting enough from Israel in return.

The Pollard proposal has been floated as part of a formula to keep faltering Israeli-Palestinian peace talks alive. Pollard’s release, which would be hugely popular in Israel, would serve as a political incentive for Netanyahu to go ahead with the release of a fourth group of Palestinian prisoners.

Under the proposed deal, Israel may impose a partial settlement freeze, and in return for these steps, the Palestinians would agree to extend peace talks beyond an April 29 deadline into 2015.

While President Barack Obama has yet to sign off on any deal, Aaron David Miller, a former U.S. peace negotiator, said even considering such a move smacked of desperation over a crumbling peace process.

“Releasing a guy who’s responsible for one of the biggest U.S. national security breaches ever makes it look like they’re panicking over the state of negotiations,” said Miller, a Middle East analyst at the Wilson Center in Washington.

Miller has personal experience with the Pollard case. He was involved in the 1998 Wye River negotiations when Netanyahu, serving an earlier term as prime minister, pressed President Bill Clinton, to release Pollard as a condition for Israel’s acceptance of an interim peace agreement with the Palestinians.

Clinton initially agreed to review the case but he dropped the idea after then-CIA chief George Tenet threatened to resign.

Even 16 years later, Miller said, an early release for Pollard in the “age of Snowden” would send the wrong signal about the consequences of spying on American soil.

The assessment of many lawmakers was equally blunt.

“It’s hard for me to see how that would jump-start the Mideast peace process,” said Feinstein, a lawmaker in Obama’s Democratic Party. “It’s one thing after an agreement. It’s totally another thing before an agreement.”

But Chuck Schumer, a New York Democrat and one of the Senate’s leading advocates for Israel, said Pollard’s sentence was disproportionate to others convicted of spying on allies.

“I would welcome it,” he said of the prospects for Pollard going free.

Retired Gen. Michael Hayden, a former director of both the CIA and National Security Agency, said the 105,000-strong U.S. intelligence community would see Pollard’s early release as “a betrayal.”

Hayden suggested Pollard’s release could foreshadow an effort by the administration to reach a deal with Snowden, who sought asylum in Moscow after leaking tens of thousands of highly classified documents on U.S. electronic eavesdropping.

“It is likely that someone would draw the connection from Pollard to Snowden and then point out that we therefore must expect that this administration might indeed be open to some kind of ‘deal’ there too,” he said.

Pollard, who pleaded guilty in 1987 to spying for Israel, has long been a potential bargaining chip in Middle East negotiations. The Obama administration faces a difficult decision: use him now or wait for a more critical juncture.

A complicating factor, however, may be Pollard himself, who is said to have suffered from health problems in prison.