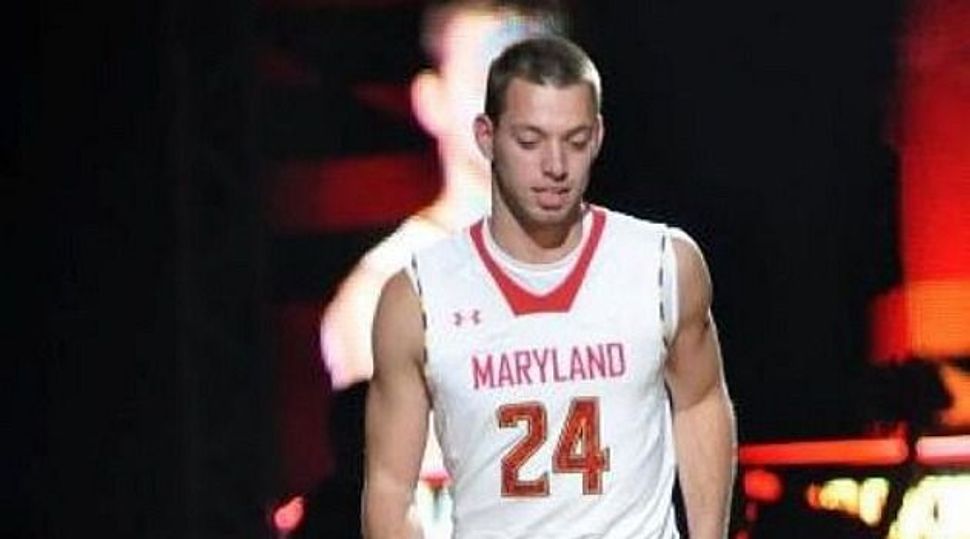 Jacob Got Game: Maryland?s Jacob Susskind was among the top Jewish hoopsters battling at Hillel?s answer to the NCAA tournament.

(JTA) — Dribbling blurs across four parallel basketball courts, the players who came for the National Hillel Basketball Tournament filled a football field-size gymnasium in a marathon of games.

Forty-one teams and 300 players from colleges across the United States came to the University of Maryland campus last weekend for the tournament’s fourth incarnation in what also represented a homecoming of sorts:

The 30 colleges whose Hillels sent teams here included seven — Duke, Harvard, Kansas, Massachusetts, Michigan, Texas and UCLA — that qualified for the NCAA Tournament. And while the play here was hardly up to March Madness standards, it was plenty good and highly competitive.

The men’s title game, in fact, featured two athletes who have attained the heights of collegiate sports: Jacob Susskind, who plays for Maryland, and Anthony Firkser of Harvard — the Crimson’s football team, that is. Maryland would win not just the men’s crown but the women’s, too.

Arriving at Ritchie Coliseum for the championship game – most contests were held at the larger Reckford Armory across the street – Susskind hobbled in, a function of fatigue from the nonstop hoops.

The Terrapins played in the National Invitational Tournament last spring, so Susskind could not compete in the 2013 national Hillel tourney. He said he was glad he came this time.

“It’s to help spread the word about Jewish people in basketball. It’s a cool concept: to come together with the same religious belief, and to do something everyone likes to do, which is play basketball, is a plus,” Susskind said on Sunday afternoon after his team, one of seven Maryland men’s and women’s clubs at the tournament, won a preliminary-round game.

Susskind, who attended the Golda Och Academy, a Solomon Schechter school in West Orange, N.J., spoke at courtside while watching Kansas play Massachusetts, and pointed to a guard wearing uniform No. 10 for the former.

“He came up to me the other day and said, ‘I know you.’ It was cool to see him,” said Susskind, explaining that the two played seven years ago at a Jewish day school tournament in Baltimore.

The Kansas player, Cory Gutovitz, in turn, said he had guarded one of Susskind’s Hillel teammates, Nachum Shapiro, at the same Baltimore tournament and stayed at Shapiro’s home.

“I was always active in Hillel, and I love basketball,” said Gutovitz, who graduated last year. “I didn’t realize how many people would be here until Friday night dinner, when I saw maybe 500 people.”

“It was Jewish March Madness. I’ve gone to Jewish tournaments in high school and had the same mind-set: that these Jewish kids can’t be that amazing. In college, I learned my lesson. It’s good, competitive basketball here.”

It’s also a schmooze fest. Gutovitz and four other Kansans stayed at the campus apartment of Tara Feld, Shapiro’s girlfriend. Chatting in the building’s corridors late Saturday night, Gutovitz met a female student who had attended the wedding of his basketball teammate at Hyman Brand Hebrew Academy in Overland Park, Kan.

And so it went: a 48-hour festival of basketball and gabbing, with breaks for kiddush, havdalah and Shabbat meals.

“It’s like the Maccabiah Games — but everyone speaks English,” quipped Tal Brody, who played in the Maccabiah and starred as a professional in Israel, where he still lives, following an All-America career as a point guard at Illinois.

While a key player when Maccabi Tel Aviv captured the 1977 European Cup, Brody can’t boast of having earned the Kiddush Cup, the trophy the Maryland teams raised as Hillel tournament champions.

The women’s Most Valuable Player Award went to Paige Siegel, a point guard for the winning Maryland club.

Watching was her cousin, Bruce Levenson, the owner of the NBA’s Atlanta Hawks.

“I didn’t realize the magnitude of it,” Levenson said. “A lot of the players really have game.”

With basketball at its core, the event began modestly in 2011 with 20 teams and one goal: “to get Jewish kids from all over the country for a weekend of communal bonding as well as basketball competition,” said Joseph Tuchman, a Maryland sophomore who chairs the tournament.

Now it has a $60,000 budget, prestigious sponsors such as Gatorade and UnderArmour, and plenty of spectators — 1,000 attended Saturday night’s opening games.

The Jewish students at Maryland are buying in. Feld, the tournament’s coordinator of volunteers and a Maryland senior, said she had no problem lining up people to run the scoreboards and keep the scorebooks at each game.

“It’s one of my favorite events at the school,” said Feld, who played forward at Yeshiva University High Schools of Los Angeles.

“You’re all here for the same purpose — basketball — but there’s also the aspect of having Shabbat together. I’ve run into people from different parts of my life.”

And with that, she motioned to a Queens College player 20 feet away whose team was playing MIT. As a high schooler, Feld had met him at a teen leadership program in Israel.

The player, Mo Pariser, actually attends Binghamton University in New York but signed up for the Queens squad because his brother Ike was on the team.

Brotherhood and sisterhood, after all, were the weekend’s themes.