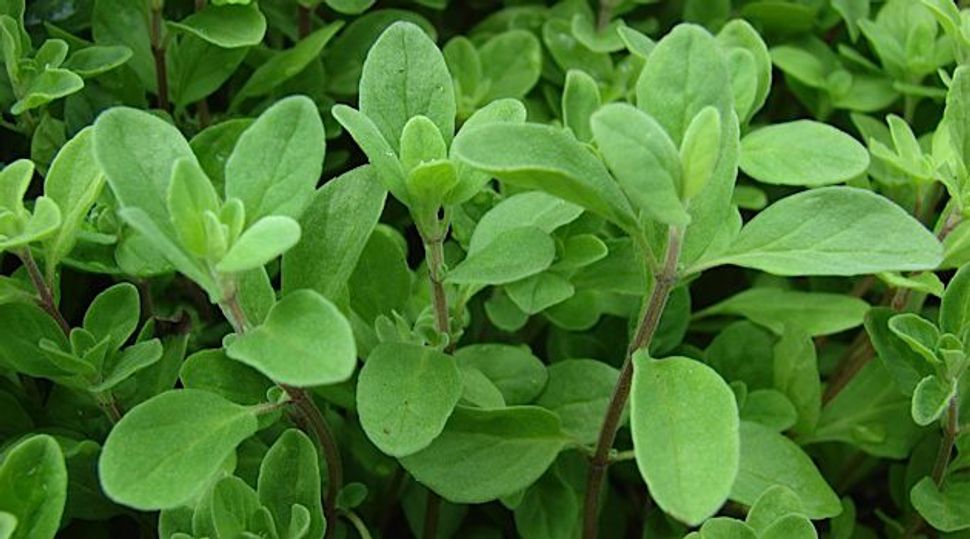 Sprig Time For Hyssop: For all practical purposes, marjoram and oregano are essentially the same plant. Image by wikimedia commons

‘Then Moses called all the elders of Israel and said to them, ‘Choose lambs for yourselves, for each family, and slaughter the Passover lamb. Take a bunch of hyssop and dip it in the blood which is in the basin, and touch the lintel and the two doorposts with the blood which is in the basin…. For the Lord will pass through to slay the Egyptians. And when He sees the blood on the lintel and on the two doorposts, the Lord will pass over the door and will not allow the destroyer to enter your houses to slay you.’”

The holiday of Passover, we all know, takes its name from this passage. No problem with that. But what is a “bunch of hyssop,” and what is it doing here? It’s one of those details that no one ever pays much attention to — yet as soon as one does, questions arise.

In the first place, how many people even know what “hyssop” means? Strangely, although it’s a semi-archaic word now rarely used in English, it’s retained in every one of the Bible translations that I’ve looked at, including recent modernizing ones, like the New Century Version of the Bible, the New International Version and the New Living Translation. My American Heritage Dictionary of the English Language defines it as “1. A woody Eurasian plant (Hyssopus officinalis) having spikes of small blue flowers and aromatic leaves used in perfumery and as a condiment. 2. Any of several similar or related plants. 3. An unidentified plant mentioned in the Bible as the source of twigs used for sprinkling in certain Hebraic purificatory rites. (Middle English ysope, from Old English osōpe, from Latin hissōpum, from Greek hussōpus, probably of Semitic origin; akin to Hebrew ‘ēzōb.)”

An “unidentified plant” mentioned in the Bible, akin to Hebrew ’ēzōb? But ēzōv, to transliterate the Hebrew word as everyone but biblical scholars would transliterate it today, does not designate an unidentified plant at all. It designates the plant Majorana syriaca, whose different varieties are commonly known as wild marjoram or wild oregano. (Marjoram and oregano are, to all intents and purposes, the same plant.) The Mishnaic tractate of Para mentions several subspecies of ezov, of which only one kind can be used in rituals of purification. Its distinguishing sign, the Mishnah says, is its having “three stalks with three sprigs each.”

Is the wild marjoram growing in my garden, which I uprooted many years ago from its native place on a nearby hillside and transplanted, the true ezov? I’m not sure. Each of its roughly foot-high, woody stalks indeed divides into three sprigs, along which grow pairs of small, light grayish-green, heart-shaped leaves whose pungent smell grows stronger when, crushed, they release their etheric oils. But the stalks themselves, which emerge from the ground in crowded clusters, do not, as far as I can see, come in threes, too, as the Mishnah says they should. Perhaps I have one of the varieties of hyssop that the Mishnah rules out for ritual purposes.

Yet for the purpose of making the popular seasoning that Palestinian Arabs call za’atar, and that is sometimes mistakenly thought to be prepared from thyme (which is a close relative of marjoram-oregano), what I have is the real thing. In a few weeks from now, when the new, tender spring leaves have reached their maximum size and are about to bloom in whorls of pale purple flowers, I’ll cut most of the sprigs, gather them into bunches tied together at their bottom ends and hang them out in the sun. After about two weeks, the leaves will be dry and brittle. I’ll strip them from their sprigs, grind them between my palms until they’re almost powdery, mix in sesame seeds and a touch of salt, and the seasoning will be ready. It can be stored in a jar indefinitely, and it adds a fine touch to salad dressings, tomato sauces, white cheeses and — my favorite — a plate of olive oil, into which I dip a hot pita for my daily breakfast.

The sprigs of ezov dipped in the blood of the Passover sacrifice were no doubt of freshly picked leaves rather than dried ones. Why was this particular plant chosen? It has been proposed that this was because its oils neutralize fibrin, the protein in blood that causes coagulation. But while this sounds impressively scientific, it does not make a great deal of sense, especially since elsewhere, in the book of Numbers, the use of such sprigs is prescribed for the purifying sprinkling of water, not of blood. A more likely explanation is the simple fact that the sprigs, when tied together, dipped in blood or water, and given a shake, spray the drops effectively while giving off a clean, pleasant smell.

In any case, if you can get a hold of fresh marjoram sprigs and wish to perform the ceremony on your own doorposts, I would definitely recommend water, even though Moses might disapprove. Have a happy Passover!