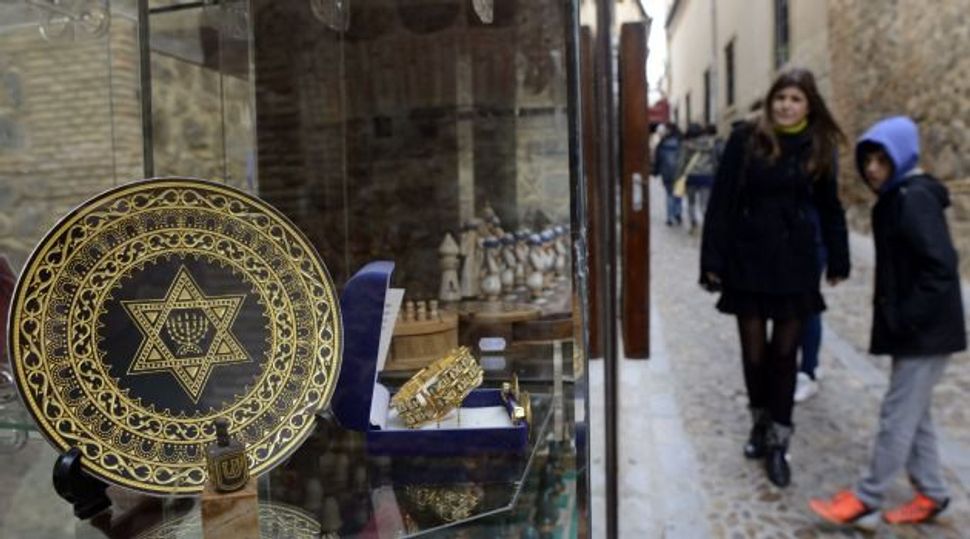 (JTA) — In the center of the medieval Portuguese town of Medelim, two newlyweds in Sephardic wedding clothes are serenaded by a musical ensemble performing Ladino music.

Nearby, several members of the knights Templar march in white capes and chain mail while a harlequin on stilts prances around carrying a pole topped with a Star of David.

The scene may have been familiar to someone living in Medelim 500 years ago, when the town had a large population of Sephardic Jews. But today there are no Jews in Medelim, their memory evoked solely by actors hired to play period roles during the municipally organized “Jewish and Christian Passover,” an annual cultural event held for the second time last month.

Occurring just months after both Portugal and Spain introduced legislation to naturalize Sephardic Jews, the festival is part of a growing embrace of Iberian Jewish heritage. Both countries have seen a surge in festivals celebrating Jewish culture, often timed to Jewish holidays such as Passover and Sukkot.

“In Portugal, there is much ignorance on how important Jews have been to our cultural roots, so events that familiarize people with Jewish traditions are welcome,” said Jose Antonio Oliveira, a geography lecturer at the Lusophone University of Humanities and Technologies in Lisbon who participated in a panel discussion at the Medelim event.

But there is also a financial aspect to the embrace of Jewish heritage. Local officials hope the events will raise the town’s profile and attract tourists.

Medelim’s tourism department hired Mor Karbasi, an Israel-born rising star on the world music scene, to perform in Ladino. Kosher wine, cheese and matzah were on sale in several stalls of the medieval-themed market set up around the festival compound. A boutique hotel called Sefarad had its grand opening.

“This Jewish holiday and the popularity of restaurants and artisans are ideal for distinguishing Medelim in the region, which will generate economic value for our populations,” Albano Pires Marques, the president of Medelim’s local council, told Portuguese media at the event.

Medelim’s Passover event was one of several Jewish-themed celebrations held recently in Iberian towns with no Jewish populations.

In October, the towns of San Juan and Rio Jerte in northwestern Spain held their first Sukkot festivals featuring Jewish foods, a crafts market and a fake Jewish wedding.

Last year, the Spanish town of Ribadavia hosted its first kosher Passover seder in centuries. Led by a Jewish historian, the dinner was attended by a mostly non-Jewish crowd and organized by local tourism officials who charged guests $40 a plate.

In February, lawmakers from the Spanish ruling party submitted a bill to the parliament of the Andalucia region that would encourage Jewish weddings at the 14th-century Cordoba Synagogue. The bill said the goal was to boost local tourism.

But not everyone is happy with the embrace of Jewish heritage.

Abigail Cohen, an Israel-born bakery owner from the northern Spanish town of Hervas, said organizers of Jewish-themed events are more cash-hungry than interested in Jewish heritage.

“Recently, there has been a serious boost in interest by municipalities and other groups in Jewish-themed festivals, particularly during Jewish holidays,” said Cohen, who has lived in Spain for 30 years. “Simply put, it’s because it pays off and brings in the crowds.”

Her town was among Spain’s pioneer municipalities in the field. Each summer since 1996, Hervas has hosted The Feast of the Converted, a four-day event celebrating the cultural contributions of Jews who were forced to convert to Christianity during the Spanish Inquisition.

And while fun activities with a Jewish flavor are welcome, she said, organizers were not open to her offers to provide more in-depth explanations about Jewish holidays and customs during the festival.

“They were not interested,” Cohen said. “The only part that they find important is the touristic element.”

Oliveira, the Portuguese university lecturer, said the Jewish festivals are a result of several factors beyond the economic one, including the gradual lifting of cultural taboos in place during decades of dictatorial rule. Oliveira also pointed to a growing realization that millions of Iberians are “in some form descended from Jews.”

Jose Carp, the president of Lisbon’s Jewish community, noted that about 20 percent of the Portuguese population in the 16th century was made up of Jews who, for the most part, converted and stayed in Portugal.

“The Jewish genetic memory,” Carp said, “is the main reason Jewish festivities are celebrated throughout the year by Portuguese non-Jews.”

But Medelim also has a potential tourist windfall in mind. The town is seeking membership in Rede de Judiarias de Portugal, a network of 19 Portuguese municipalities established in 2011 to help promote Jewish heritage tourism in the country.

To be accepted, mayors must invest in their Jewish patrimony and tourism infrastructure. As a member, they can expect national and European grants along with free publicity from the tourism ministry.

Last year, the Portuguese network clinched nearly $7 million in special funding from European countries, a welcome addition to the budgets of municipalities hit hard by the financial crisis gripping Iberia. The network’s bosses estimate it has the potential to attract 300,000 tourists a year, yielding an income of $83 million.

But despite these obvious financial incentives, not everyone was quick to write off the efforts. Michael Freund, the chairman of the Israeli nongovernmental organization Shavei Israel, runs a Jewish heritage center in the Portuguese city of Trancoso as part of his outreach efforts to descendants of Jews.

“Even if there is some economic motivation involved, I don’t think we should dismiss it,” Freund said. “For the most part, what Spain did to our people has been swept under the rug there. So when there’s a new effort to better understand the Jews who contributed so much to Iberia’s cultures, we should encourage and facilitate it.”