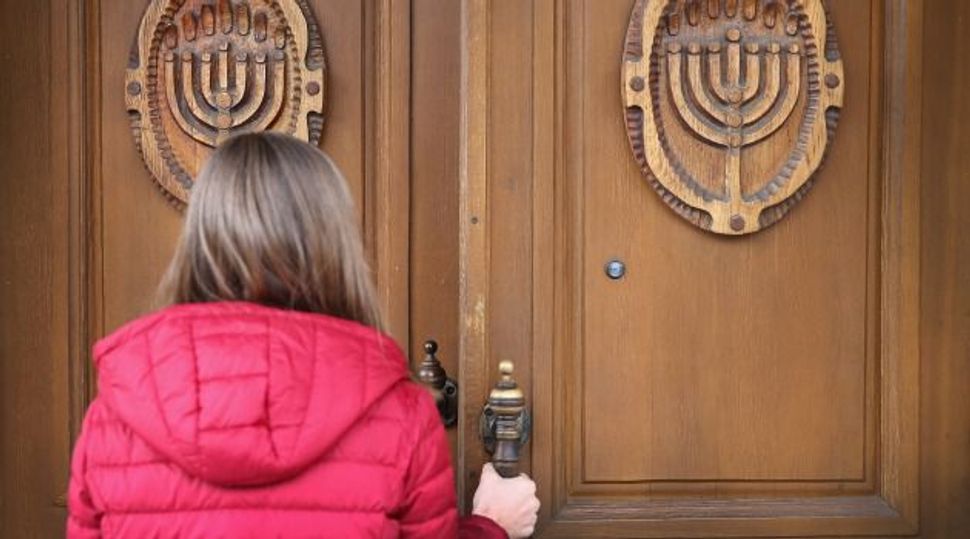 Dispute Wont’ Die: A woman arrives at a synagogue in the restive Donetsk region of eastern Ukraine. Image by getty images

(Reuters) — A Ukrainian rabbi whose congregation was the target of an anti-Semitic leaflet that drew global media interest and condemnation from the U.S. government believes it was a hoax and wants to put the matter to rest.

But five days after the incident in the restive eastern city of Donetsk, Ukraine’s prime minister, anxious to maintain U.S. support against Russia, issued a statement accusing Moscow and told a U.S. TV channel he would find the “bastards” responsible.

Following earlier Russian allegations of anti-Semitism aimed at the new Ukrainian leadership, the rabbi’s call for an end to the furore seems unlikely to prevent mutual accusations over minority rights continuing to inflame the conflict.

On Monday evening, as Jews left a synagogue after a Passover service, masked men handed out fliers purported to be from pro-Russian separatists who seized the regional authority building in Donetsk and styled themselves as its government.

In an echo of the Holocaust which devastated Ukraine’s Jews, it ordered all Jews to register with them or face deportation.

Denis Pushilin, head of the separatist Donetsk People’s Republic, said it was a fake, presumably by supporters of the Ukrainian government, that was meant to discredit his movement.

Pinchas Vishedski, chief rabbi of the Donetsk area’s 15,000 Jews, told Reuters on Saturday that while it was initially shocking, he was now satisfied it was a political hoax – “a crude provocation” – though its authorship was still unclear.

“I’m asking those behind this not to make us tools in this game,” he said. Anti-Semitic incidents in the Russian-speaking east were “rare, unlike in Kiev and western Ukraine”, he said.

Quoted on the community’s website, Vishedski had said on Thursday: “Since it’s only a smear, we should react responsibly – draw a line under it and close the matter.”

On the same day, however, U.S. Secretary of State John Kerry told reporters after agreeing a peace plan with Russia that he condemned the “grotesque” incident in Donetsk.

Other U.S. officials also voiced outrage. A senior senator said Russian President Vladimir Putin had accused Ukrainian nationalists who seized power in Kiev of anti-Semitism, “but now it is pro-Russian forces that are engaged in these grotesque acts”.

On Saturday, Ukrainian Prime Minister Arseny Yatseniuk vowed to use “every legal means” to prevent the “import” of anti-Semitism and xenophobia and indirectly blamed Russia.

“The ideology and practice of pogroms, exported by a neighbouring state, will not be allowed into Ukraine,” he said.

Anti-Semitism remains a feature of militant nationalism in both Ukraine and Russia. During unrest that saw the overthrow of Kiev’s Kremlin-backed president in February, several attacks on Jews and synagogues were blamed on Ukrainian far-right groups.

Yatseniuk also spoke of “reports of pro-Moscow terrorists” conducting “pogroms” against Roma near Donetsk – an allegation repeated by the interior minister, who, like the SBU state security service, also issued a press release promising action.

Asked about the “ghastly reports” by a U.S. television interviewer, Yatseniuk pointed to his statement and told NBC’s “Meet the Press” programme he had urged troops and police “to find these bastards and to bring them to justice”.